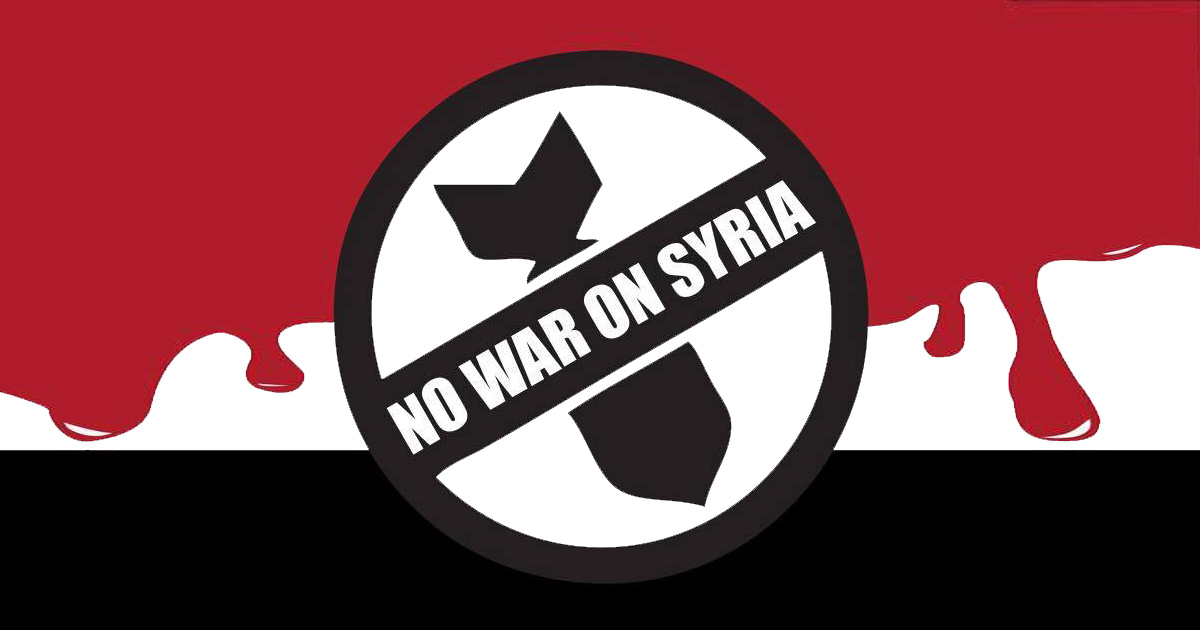 The Libertarian Party of Washington County, NY, the Warren County Green Party and the Saratoga Peace Alliance support the efforts of the UNAC (United National Anti War Coalition) and are having a solidarity demonstration on Tuesday, April 11th at 3:00 pm in front of Congresswoman Elise Stefanik's office at 136 Glen Street in Glens Falls to say "No War Without Congressional Approval" "Stop Bombing Syria" we welcome the public! No matter political affiliation we can have common ground on this issue. RSVP on Facebook.

Neither Trump nor any other U.S. government agency presented a shed of proof that the government of Syrian President Bashar al-Assad used sarin nerve gas in its bombing of ISIS, Al Qaida or any other “rebel” groups in Syria's Idlib province. President Assad denied using sarin gas while “Russia’s defense ministry” according to the UK-based Guardian, has stated that the chemicals were release when a Syria bombed a “rebel” arm storage facility.

Trump and his now bi-partisan "Bomb first! Ask questions later" cohorts have ignited what could become a catastrophic escalation in the region that poses the threat of nuclear war. Immediately before the U.S. missile attack, the Trump administration convened a bi-partisan group of 25 Democrats and 25 Republicans for a congressional briefing session. While there was no indication of opposition to the Trump attack, a few, citing the U.S. Constitution, later expressed the need for congressional debate and approval before waging war.
Employing the Obama administration's "red line" threat of war in 2013 Trump stated, “These heinous actions by the Bashar al-Assad regime are a consequence of the past administration’s weakness and irresolution. President Obama said in 2012 that he would establish a ‘red line’ against the use of chemical weapons and then did nothing." No doubt Trump was fully aware that Obama's "nothing" included the continued arming, organizing, financing and training of terrorist and associated U.S.-backed groups in Syria aimed at al-Assad removal.

The corporate media near unanimously beat the war drums to fever pitch and then hailed the bombing without the slightest inclination to investigate, not to mention demand, any facts to substantiate their reflex support for Trump's monstrous deed. Indeed, and as always, when pretexts followed by war are employed to justify imperialist actions the corporate media paved the way with tragic photos of stricken and suffering children, all accompanied by unsubstantiated assertions that the Syrian government was responsible.

Few, if any, of the kept press proved capable of reporting that the 2013 sarin gas attacks in Syria, according to the research of Pulitzer Prize journalist Seymour Hersh and others, were the work not of the Syrian government but the so-called rebels in Syria, including ISIS. The latter took the Obama's "red line" thesis seriously and likely proceeded to make it happen. But Obama's effort to bring on yet another U.S. war of intervention and plunder was fortunately thwarted by world opinion and massive antiwar sentiment in the U.S. At that time, skepticism among U.S. allies regarding another U.S. land war in the region proved sufficient to halt the Obama administration’s drive to war. Yesterday, that proved sufficient, but not today.

With Syria's U.S.-backed "coalition" including NATO and Gulf State monarchy- abetted forces compelled to retreat from most of the two-thirds of Syria that they previously occupied and terrorized, a bi-partisan consensus has now emerged in Washington that Obama's "regime change" orientation cannot be dismissed.

The April bombing, according to this scenario, can be effectively used at a future bargaining table to better ensure U.S. influence in a contemplated reconstructed Syria.
U.S. imperialism's "fight" against ISIS terrorism can now take a back seat to Assad's downfall down the line.

The need for a united and massive U.S. antiwar movement in the streets of cities across the country has never been greater. Trump's dangerous and murderous escalation, despite his "assurance" that it is measured and "proportional," will prove to be the beginning of renewed and intensified U.S. imperialist war in Syria and the region and not the end.
We are witness to a major shift in U.S. policy wherein Democrats and Republicans alike, cannot brook a defeat in a war that they have fueled and promoted for almost seven years. Today’s crisis-ridden world economy ruled by the one percent is compelled to pursue and intensify its wars against working people at home and abroad.

The days ahead will prove to be a critical measure of our capacity to unite and stay the hand of the world's most dangerous super power.