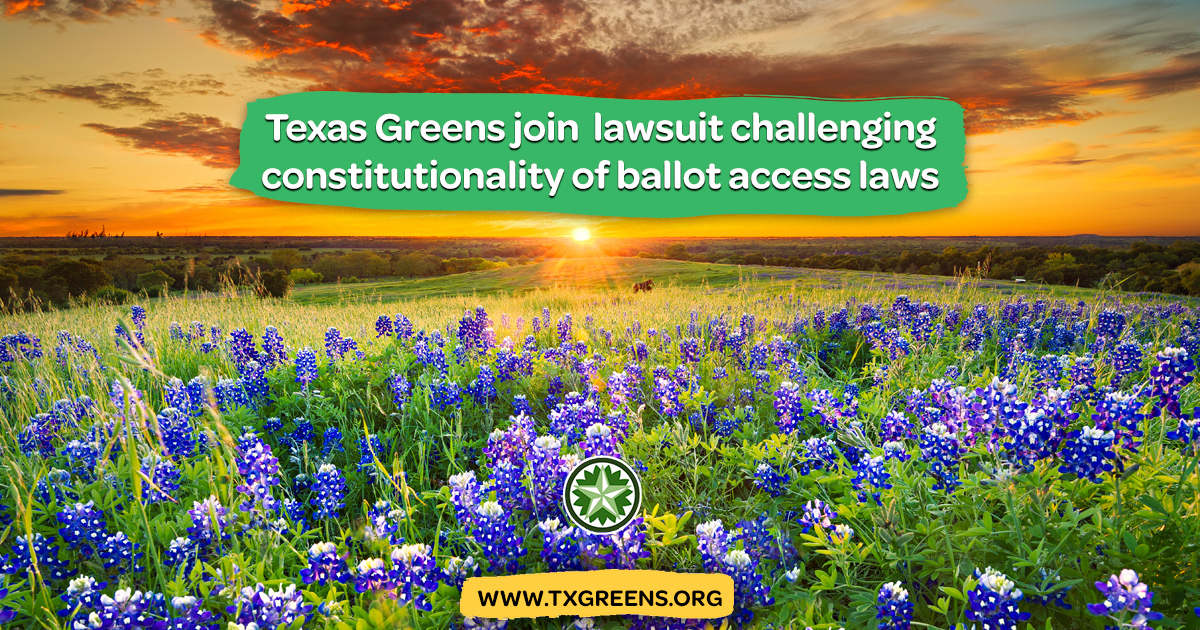 The Green Party of Texas (GPTX) has joined with other parties, candidates, and voters in filing a lawsuit to challenge Texas' unconstitutionally burdensome ballot access requirements.

The following press release was issued by the Center for Competitive Democracy and the law firm Shearman & Sterling.

AUSTIN, TX, July 11, 2019 – A group of Texas voters, candidates and minor political parties filed suit today in federal court in Austin, alleging that the Texas Election Code violates their First and Fourteenth Amendment rights by imposing discriminatory and severely burdensome requirements on independent candidates and minor political parties that seek access to Texas' general election ballot. The filing challenges the combined impact of several statutory provisions, including the large number of handwritten voter signatures that must be submitted on paper nomination petitions in a limited period of time, as well as the restrictions on when nomination petitions may be circulated, which voters are eligible to sign them, and the deadlines for filing nomination petitions.

In 2020, the challenged provisions require minor parties to obtain 83,717 valid signatures on paper nomination petitions in only 75 days. Independent candidates for statewide office must obtain the same number in as few as 30 days, if there is a run-off primary for the office they seek. Independent candidates for president need to collect 89,692 valid signatures in just 69 days.

The plaintiffs – Mark Miller, Michele Gangnes, Scott Copeland, Laura Palmer, Tom Kleven, Andy Prior, America's Party of Texas, Constitution Party of Texas, Green Party of Texas and Libertarian Party of Texas – allege that the cost of obtaining the required signatures will exceed $600,000 in 2020, largely because Texas's nomination petition procedure is obsolete. Texas first adopted that procedure in 1905, and it has not been significantly updated or improved in the 114 years since.

"Collecting signatures by hand is inherently time-consuming, labor-intensive and expensive," Miller said, "and collecting 80,000-plus valid signatures in the limited time allowed under Texas law is all but impossible without spending hundreds of thousands of dollars to hire paid petition circulators."

The plaintiffs allege that Texas could reduce the burden and expense its statutory scheme imposes on independent candidates and minor parties by adopting electronic procedures for obtaining voters' signatures. In Arizona, for example, the Secretary of State has implemented an online platform that enables voters to sign nomination petitions from the comfort of their own homes (available at https://apps.azsos.gov/equal/). Other jurisdictions enable voters to sign nomination petitions on portable electronic devices. Such procedures automatically validate a signature, and thereby eliminate the need to collect more signatures than the requirement.

"We filed this lawsuit to restore and protect the right of all Texas voters to cast their votes effectively for the candidates of their choice," Miller said. "As plaintiffs, we represent a wide range of political views, but one point on which we all agree is that every citizen has an equal right to participate in Texas's elections."

The plaintiffs are represented pro bono by the non-profit Center for Competitive Democracy ("CCD") and Shearman & Sterling, LLP, a global law firm with 23 offices, including in Austin and Houston.

"Texas' burdensome ballot access requirements and obsolete procedures combine to create a financial barrier to entry that is insurmountable for non-wealthy candidates and parties," said CCD attorney Oliver Hall. "We think the federal courts will recognize that Supreme Court precedent prohibits Texas from limiting participation in its electoral process to those with financial means."

"It is essential that voter choice not be limited only to those candidates able to overcome severely burdensome Texas election procedures," said David Whittlesey, a partner in the Litigation practice based in Shearman & Sterling's Austin office who is representing the plaintiffs. "This lawsuit seeks to secure a more open, competitive election process to give Texas voters more options at the ballot box."

A ballot access bill introduced in the Texas House in 2017 (HB 3068) and 2019 (HB 4439) would have established constitutional requirements and procedures for independent candidates and minor parties, but it was not enacted. Instead, in 2019 Texas enacted HB 2504, which imposes an additional filing fee or nomination petition requirement on individual nominees of minor parties, in addition to the nomination petition the parties must file. The plaintiffs also challenge these new requirements.

The plaintiffs assert claims for the violation of their rights to cast their votes effectively, to speak and associate for political purposes, and to the equal protection of law. The lawsuit, captioned Miller v. Doe, No. 1:19-cv-00700, names the Secretary of State of Texas (presently a vacant office) and Deputy Secretary of State Jose A. Esparza as defendants in their official capacities, and seeks to enjoin the state from enforcing the challenged provisions.