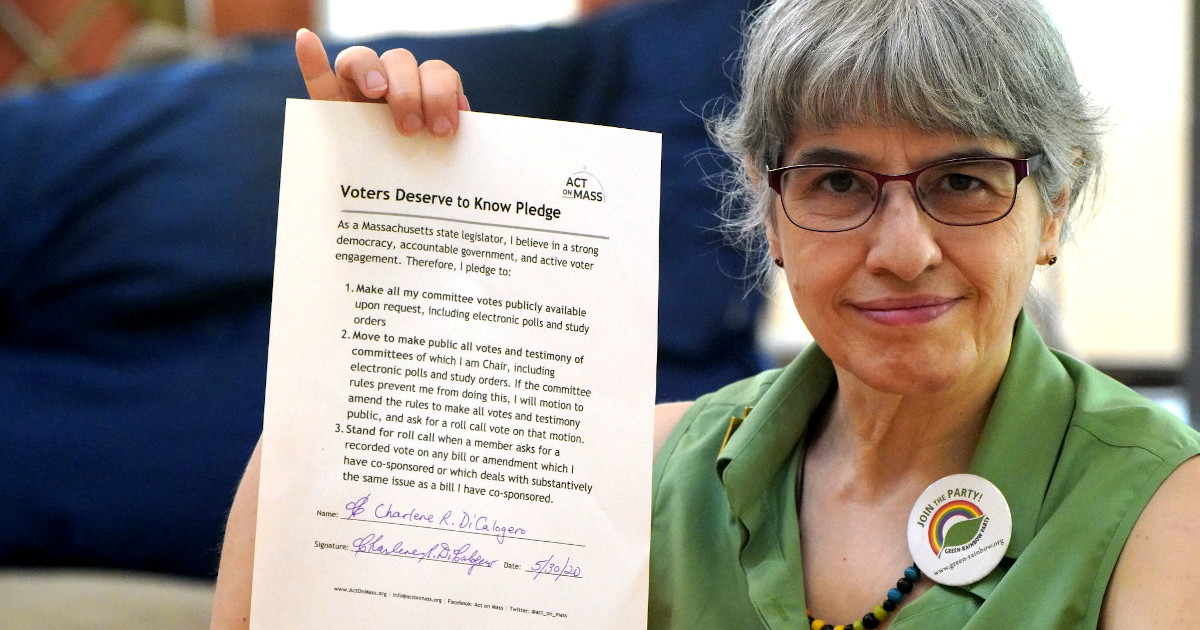 This year, Green-Rainbow Party candidate Charlene DiCalogero is running in a rare open-seat race for State Representative in the 12th Worcester district in central Massachusetts. Charlene is the only candidate in the state from a party outside the Democrat/Republican duopoly. In November she will compete in a three-way race against a Democrat and a Republican.

Along with the presidential ticket of Howie Hawkins and Angela Walker, she will give the voters in her district a real choice. The MA state legislature has been dominated by Democrats for decades, and voters mostly get ballots with the incumbents and no challengers on them, year after year.

"A key reason I'm running for state legislature is to highlight how outrageously undemocratic, secretive and corrupt our State House is," declared the former Berlin town official, who just completed a three-year term as Library Trustee. "That's why I'm running Clean and Green, and why I signed the Act on Mass pledge, to make the record of our state elected officials' votes publicly available, as they rarely are now." According to the nonprofit organization Act on Mass, Massachusetts has one of the least transparent and least accountable state legislatures in the US.

Charlene has run for state office twice before: the first against an incumbent, and the second in a four-way special election for State Senator. As both constituent and candidate, she believes, "people should be outraged that our legislators break the law with impunity, and hide the policy decisions they make on our behalf and with our money. They forget that 'we the people' are their boss. It's about time we fired them and put someone with integrity in office, who they can trust to work for them." As examples she cites the Republican winner of her 2017 State Senate race, who was punished by the Senate Committee on Ethics earlier this year for multiple violations of campaign finance law, yet was allowed by his colleagues to keep his Senate seat; and a Democrat, still listed as in office, who was chair of the House Ethics Committee, federally charged with embezzlement, tax and bank fraud, also this year.

Charlene's record shows that she is a champion for the 99%. She has been active in the anti-foreclosure movement as a Board member of the MA Alliance Against Predatory Lending (co-founded by the Green-Rainbow Party). She is a climate action organizer for 350 Central Mass and the Worcester Climate Strike Coalition, and she helped get Ranked Choice Voting on the MA ballot this year. A resident of MA for over 20 years, she is a 60 year old queer white cis-woman who began her activism in the lesbian feminist anti-violence movement. Most of her working career has been spent in nonprofit organizations focused on literacy, educational research, and sharing self-advocacy tools.

Recognizing the importance of a strong party at the state level, Charlene ran for and was elected Female Co-chair of the Green-Rainbow Party in 2018 and 2019, and has just begun her second four-year term as a State Committee member.

She encourages Green Party members to see 2020 and the coming decade as a new opening for political change and a Green revolution: "It's essential that we recruit and run more Green Party candidates on the 10 Key Values and our platform for People, Planet and Peace, especially at state and local levels. People nationwide are so much more aware of the connections between the long-standing takeover of our government by the 1%, the botched pandemic response, and the systemic, deeply entrenched violence and injustice of racism and other -isms. We have a unique opportunity this year and beyond to offer a better way to voters who are paying attention as never before."