Stand Up Fight Back: Pipelines Blow! 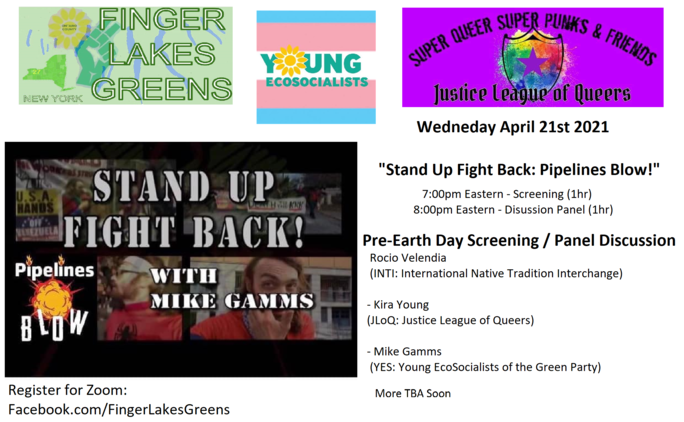 The Finger Lakes Greens and Young EcoSocialists of the GPUS present the movie "Stand Up Fight Back: Pipelines Blow!" followed by a  Panel Discussion. "Stand Up Fight Back: Pipelines Blow!" "Pipelines Blow!" is a comedy / documentary covering pipeline ﬁghts all over the US for the past 3 years from the Dakota Access Pipeline in North Dakota to the LA Comedy Store Roast Battle to The Mountaineer Gas / Potomac Pipeline in West Virginia. Featuring SuperActivist Kira Young. Also covering the Atlantic Coast and Mountain Valley Pipelines in Virginia, Line 3 in Minnesota, Mariner East in Pennsylvania, Williams pipeline in New Jersey.

The discussion panel will include Rocio Velendia, the CEO/ founder of the International Native Tradition Interchange (INTI). INTI is an Indigenous Peoples organization established in 1995 and awarded Consultative Status with the United Nations Economic and Social Council in 2004. INTI works for the advancement of the rights of indigenous peoples and to protect Mother Earth. The organization strives to enhance indigenous capacity and participation based on traditional knowledge and a holistic vision of the world in cooperation with the international community. Additionally, Rocio Velandia was the Policy Advisor for Indigenous Peoples for the 2020 Gamms For NY 27 Congressional Campaign.

Kira Young (JLoQ: Justice League of Queers) served for a decade at FEMA in disaster assistance and had a rare opportunity to observe how the current system of government is failing the people. Kira holds a Masters degree from New College of California and has been leading Interfaith prayer groups for over 20 years. As a citizen journalist, Kira reported on the resistance to the Dakota Access Pipeline in Standing Rock, ND in 2016. Returning to Virginia, Kira began working on the resistance to the Mountain Valley and Atlantic Coast Pipelines. In 2018, Kira consulted WV residents in their resistance to the Rockwool Insulation factory.

In addition to her role as Ecological Emergency Advisor with the 2020 Gamms For NY 27 Congressional Campaign, Kira Young recently served on the Board of Directors of The Virginia Network for Democracy and Environmental Rights (VNDER), an organization created to “assist environmental, labor, public health, and social justice community groups."