Why are Democrats trying to end the independence of the Green Party of Connecticut? 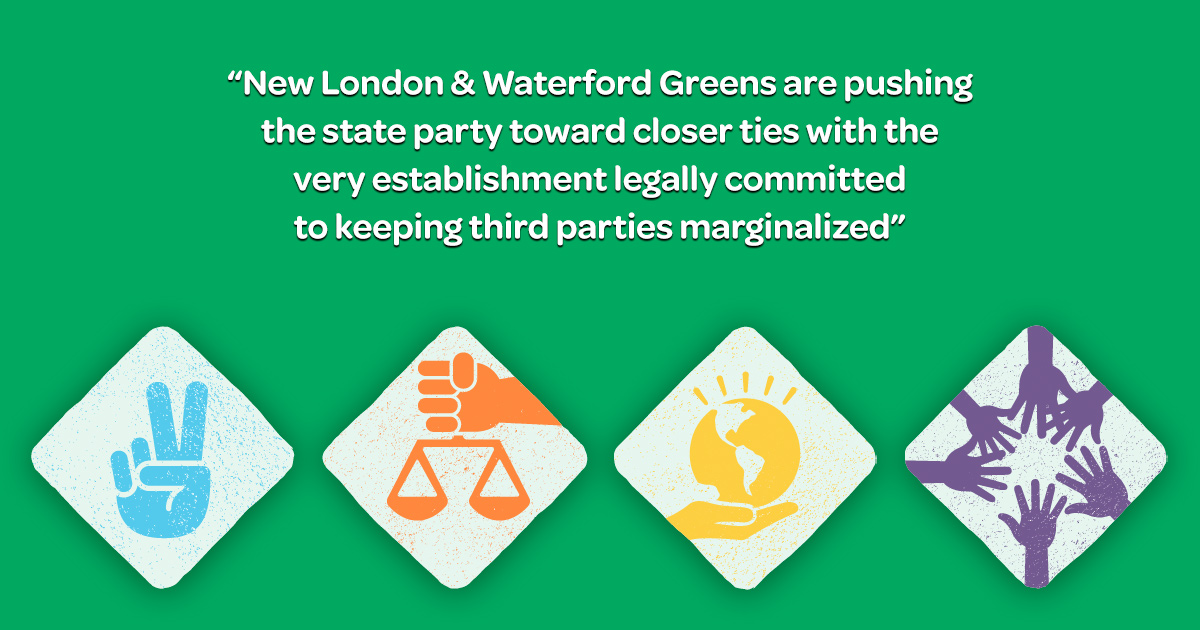 The Green Party of Connecticut (GPCT) may become a tool of people who want to support Democrats running for office. Rewritten bylaws are being produced that would no longer require a person to be registered with the Green Party to be a member and would allow Greens to endorse Democratic candidates. These are two changes of many that will end the 24-year era of the GPCT being an independent party unless people stand up against this takeover. Even before the changes, Greens have put Democrats on their ballot in Connecticut.

Opaque and vague in character, a proposed 17-page bylaw revision is meant to replace the current four-page bylaws and includes a number of provisions that run contrary to principles of autonomy and democratic process, both of the GPCT and the Green Party of the United States. These include:

While there are numerous other issues with the proposal, of particular note is a new "Ethical Standards" section, which, while failing to articulate any, puts ultimate authority over claims of misconduct into the hands of an ethics committee, whose non-standing, as-needed structure is an open invitation for prejudicial abuse.

Feeding From the Hand That Slaps You

For any part of the Green Party to move in such a draconian direction, particularly during the current political climate, may seem absurd on the surface. In states like Illinois, Colorado and Maryland, Greens are upholding their independence in their bylaws by expressly prohibiting cross-endorsement with Democrats, Republicans and other corporate-funded parties. This is consistent with the public mood, as both corporate parties have record low levels of support. Yet in Connecticut, the process of moving the Green Party more and more in service to the political mainstream has appeared to only accelerate since 2016, when Jill Stein attained the ballot line, against all expectations, in the Constitution State.

The superficial appropriation of Dr. Stein’s Green New Deal platform by the Democrats and their latest progressive pretender, the ever-celebrated Alexandria Ocasio-Cortez, is a testament to how desperate the liberal half of the Corporate Party has become in the face of sustained electoral disappointment.

Yet to Connecticut’s New London and Waterford Greens, the only acceptable response has been pushing the state toward closer ties with the very establishment legally committed to keeping third parties marginalized, not just via running municipal/state candidates who have made being cross-endorsed part of their campaign strategy, but, cross-endorsing Democrats, in turn. One of the latter, Chris Soto, who ran uncontested for State Representative in New London last November, is now part of Governor-elect Lamont's administration, much to the embarrassment of even the GPCT Secretary Ronna Stuller of New London, responsible for maneuvering Soto and Waterford-based Democrat State Representative (and ex-Green) Baird Welch-Collins onto the Green Party ballot in October

Representatives from these and other chapters across Connecticut (a “blue” state) have long defended cross-endorsement, or fusion, as a practical strategy to lure more Democrats into the Green camp, when, in truth, it threatens the integrity of the Green Party in the eyes of more than 60 percent of voters who no longer believe either of the dominant parties serve their interests and are looking for substantial, constructive options. As 2018 New York gubernatorial candidate and long-standing union activist Green Howie Hawkins has warned, such collaboration can only lead to the Green Party ending up as a "satellite" of the Democrats, like the Working Families Party, which, like Bernie Sanders did at the DNC in 2016, runs populist candidates who end up encouraging supporters to vote for his or her Democrat counterpart, in the end.

With the economies of both New London and Waterford intimately tied to different facets of the Military-Industrial Complex (naval contractor Electric Boat in the former, Dominion Energy’s aged and poisonous Millstone nuclear power station in the latter), the community pressures to challenge anything that threatens to upset the status quo would obviously be tremendous, which is why the scope of the chapters' civic engagement rarely goes beyond cleaning public parks, painting street murals and, in Waterford, partnering with a local organization to put up birdhouses.

Meanwhile, efforts at conversion away from the construction of attack submarines to light rail, solar technology, and other productive alternatives, or the rapid decommissioning of the regionally-hazardous Millstone reactors go by the wayside.

Careerism plays a big role for Greens in Waterford, many of whom, being of college age, eye the Green Party as a stepping stone into mainstream politics and policy-making, such as former State Co-Chairs Joshua Steele-Kelly (currently Windsor’s Assistant Town Manager) and Emily Garfinkel, who have interned, respectively, with unabashed hawk U.S. Representative Joseph Courtney (D) and the Kowalski Group lobbying firm, which (even as the GPCT has been advocating for a State Public Bank in Hartford) numbers 2008 bailout recipient American Express among its clients. Along with cross-endorsement, both associations violate the current Ethics Standards of the state bylaws, prohibiting “the making of commitments… that conflict with Party or Chapter policies, principles, or ethical codes”.

Further, the entrenched involvement of relatives of both the Kellys and Collins in city politics has inspired local media  to cast the Waterford Greens as a “friend-and-family affair” with good reason: while Baird’s father, Billy Gene Collins, ran in 2017 for Zoning Board of Appeals as a Green, Board of Education candidate Deborah Rosseli-Kelly is both Joshua’s mother and was locally cross-endorsed with fellow Democrat candidate, Michael Buscetto for Board of Assessment Appeals in the same year’s municipal elections.

Preceding these examples, repeated instances of online trolling, reckless candidate nominations, defense of Democrats on Green social media and an unwillingness to defend our own candidates in response to mainstream political red herrings--like the Stein/Russiagate witchhunt--have stimulated speculation of infiltration over the years, now substantiated not just by the abrupt introduction of the proposed bylaws, but how aggressively they have been pushed, without open discussion or tolerance for even the most obvious questions.

No members from Waterford, including Chapter Chair Carl D’Amato, volunteered information when concerns were raised as to who penned them, whom and how many in the chapter voted to approve them prior to the January 9, 2019, SCC meeting in Portland (the following morning, after promising to produce documentation for the February meeting, Joshua Steele-Kelly resigned as State Co-Chair and registered as a Democrat).

Most telling of all was when Cora Santaguida of Stamford asked, "How do we know this didn't come from the Democrats?" Crickets; not even a show of feigned indignation.

The germ of the current situation arguably rests on a self-serving interpretation of one of the Ten Key Values, Decentralization, which has been cited repeatedly over the years by members in Waterford, New London and elsewhere to justify the presumed right of different parts of the state party to set their own policies and affiliations in blatant violation of what the Green Party represents, while still claiming the right to bear the Green moniker (click here to view Waterford’s rebuke of its own party’s State Central Committee for asking Welch-Collins to decline the chapter’s endorsement).

Generally associated with the principle that the Green Party at various levels should be able to operate on an autonomous basis, free from outside interference by top-down bureaucracy, Decentralization, like the rest of the Values, is more externally descriptive than internally prescriptive in its emphasis on eschewing local control of society by well-heeled, far-ranging corporate/political interests, in favor of resilience- and community-building ways of meeting shared needs, like municipal utility districts (MUDs), public banking, co-ops and community gardens.

New London’s dependence on Pentagon-tied Electric Boat and Waterford’s on meltdown-prone Millstone (whose Virginia-based owner Dominion contributes a sizable amount to the municipal tax base) not only makes a mockery of Decentralization but also violates a number of the other Values regarding peace-building and the environment, as well.

As of this writing, concerned Greens have managed to keep the vote on the bylaws proposal deferred, either until it is withdrawn for its violation of GP standards, or to, at least, have it voted on at a special statewide convention, rather than at a smaller monthly meeting, where the greatest number of Connecticut Greens have the opportunity to participate in person or by mail.

This attempted takeover of the Connecticut Greens shows the Democratic Party does not want competition from an authentic third party that stands in opposition to the two corporate-funded parties. The Democrats know they are losing the support of voters and need to manipulate elections even more to avoid competition from parties that put the interests of voters before wealthy donors.

Rolf Maurer has represented the Greens in several runs for public office since 2009 and has served as State Co-Chair twice.
Cora Santaguida is Co-Chair of the Fairfield County Chapter of the Green Party of Connecticut.