Meet The Democratic Socialist Running For City Council In Brooklyn 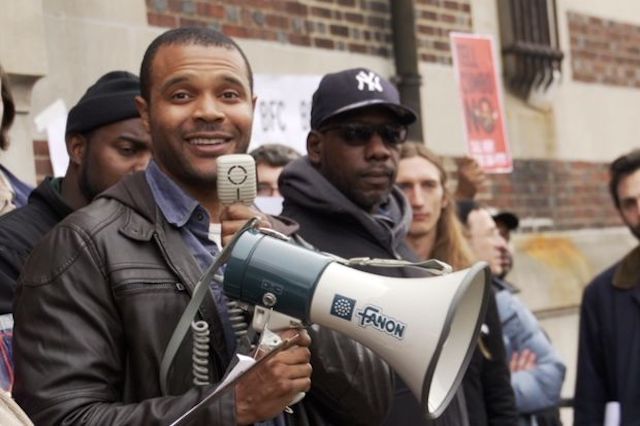 Six months out from NYC's local 2017 elections, only one declared City Council candidate is a member of the Democratic Socialists of America. Jabari Brisport, a 29-year-old actor-activist, tutor, and Prospect Heights native, is running on the Green Party ticket in incumbent Democrat Laurie Cumbo's District 35, which covers parts of Fort Greene, Clinton Hill, Crown Heights, Prospect Heights, and Bedford Stuyvesant.

DSA, the largest socialist organization in the country, has gained national momentum with its anti-capitalist platform since Donald Trump won the presidential election and, as organizers put it, "used racism to divide working people."

The Gothamist
By Emma Whitford
April 7, 2017

The group is not a political party, though organizers say they may eventually put forward their own candidates. While the long term goal is to dismantle capitalism (not to mention the racism, gender discrimination, and environmental destruction it propagates), DSA is currently focusing on two short-term goals: pushing democratic candidates further to the left a la Bernie Sanders, and supporting community organizing efforts.

"I've been part of several activist organizations and DSA has been the best at plugging into local battles," Brisport told Gothamist. "It's a tough thing to do, to support the battles of another group without making it about yourself."

Last week, we talked to Brisport about his decision to join DSA, his commitment to the often-rebuked Green Party, and why City Council members should make less money.

You grew up in Prospect Heights, which I imagine has changed pretty dramatically since you were a kid. Was it the site of your political awakening?

I remember when we would play outside in the summer and pop open the fire hydrants. I think the most troubling thing for me was gentrification coming through my neighborhood while I was away [at college, at NYU]. That's when the battle happened. I'd come home for a break and the Haitian man who would sell me candy as a kid at the candy store was closed down because the rent was too high. He had to move back to Haiti. Or I'd come back on another break and the movie theatre was closed down, getting replaced by an American Apparel.

I like to say that gentrification isn't caused by white people, it's caused by capitalism. I had an anti-gentrification theatre group in college and we would go out into the streets and do political theatre against NYU eating up the entire Village. I'd say that's where my politics started.

So the developers are the enemy?

There's plenty of room for people to move to New York, and also for us to keep the communities that were already here, if we just build up and build higher. And developers are going to say, "Well, if we build high it's going to cost so much, we'll need to have high rents in order to pay for that." They say that, but you have to ask yourself if they are building as much affordable housing as they can, or if they're just putting an artificial cap and then just stuffing their pockets.

You haven't shied away from addressing racial tensions though—I'm thinking of the 'Hey White Lady' video on your campaign website.

I wrote the song in 2009, back when I first graduated from NYU. I was not a teenage black guy anymore, I was an older black guy—and I'd see women [in Prospect Heights] crossing the street in order to avoid passing by me. It's really easy to go for all the negative aspects of what's going on in politics, but there is levity to be found, especially now in such dark times. If you can, get people to take action but with a wink, or a joke—that's something that can give people hope and keep them going.

Mayor de Blasio's affordable housing plan hinges on working with developers, and striking a balance that still allows them to profit. The Bedford Union Armory, in your district, is a prime example: a percentage of below-market rate apartments, but also luxury condominiums. Council Member Cumbo has expressed interest in working with the developer, making the current proposal more affordable, without scrapping it. Do you see an alternative?

I would be on the side of killing the deal, because I don't think condos will be helpful for speculation in the neighborhood. I think as much land as possible should be in control of the community—publicly and democratically controlled. A community land trust is a great way to do that, because you have local members incorporating into a non-profit and they have final say in negotiating with developers.

When did you decide to run for office?

After the apocalypse happened, with the election.

It seems like the 'apocalypse' drew a lot of people to DSA.

The selling point was that they were doing lots of local actions. That really spoke to me, because I wanted to get out and get involved and I wanted to see what I could do locally—because at the federal level we've already lost.

We're not just getting people that are really good at organizing a rally or a protest, but also some that really understand policy and either work in non-profit sectors or work as community organizers and understand the nitty-gritty, nuts-and-bolts wonkishness of what needs to be done with housing, or the environment, or electoral reform.

What are a few policy items you're planning to push for?

An anti-speculation tax, which is a tax on house flipping. In San Francisco they proposed jacking up the real estate property transfer tax in the first year, and then it drops year over year, so it incentivizes holding onto property longer [Editor's note: the SF legislation was rejected in 2014]. And then a vacancy tax: if somebody wants to purchase a lot or a building and just hold on to it while the market heats up, or if a foreign investor buys an apartment and leaves it empty, you tax it.

So, why the Green Party?

I was a huge Bernie supporter during the primaries and then once he lost I switched over to Jill Stein. We have a very strong anti-military stance at the national level and here at the local level I think I'm the only candidate that's calling for massive change in the NYPD—you know, our own local military. I would love to do a pilot program where you just divvy out $1 million to every precinct [for participatory budgeting]. That's like a drop in the bucket. After a lot of complaining from activists the Mayor ordered the NYPD to all put on body cameras by 2018. Body cameras are something we've demanded for years.

I also think I'm the only candidate not only talking the talk about income inequality and calling for higher taxes on the wealthy, but also walking the walk and pledging to slash my own salary to the median income of Brooklyn. It's a socialist plank. Kenneth Mejia, he's a Green running for congress out in LA, he plans to do that as well. Politicians should represent their electorate, and that doesn't just come from looking like the people you serve—a black guy in a black district—you also need to walk in people's shoes economically. I honestly think we would have a different conversation on "affordable housing" if our city council members weren't making $150,000 a year.

I don't know if there's even been a Green Party candidate who's ever won a seat in the council in New York.

You are correct, yeah. This is a Democratic stronghold. The interesting thing is in my district, a Working Families party candidate won: Letitia James, in 2003. So if any district has a third-party candidate coming in, it's this one.

DSA has yet to endorse you; at the national level, the organization has gone so far as to describe third-party efforts as "doomed" in America's entrenched two-party system.

Can you anticipate any natural alliances in the City Council?

I'm a big fan of Jumaane Williams [D-Flatbush]. I think he's very honest, and I think he's for the community. I also just met Brad Lander [D-Park Slope]. I'm happy with what he did on the plastic bag bill, stand up guy. And this is silly, but I'm a vegan. Corey Johnson [D-Upper West Side], I love that he's stood up for circus animals. I watched his speech. I was very moved by it.

Still, you must be anticipating some uphill battles. And, if you win, compromises. The Green Party has historically struggled to be taken seriously.

I'd say the biggest weakness would be name recognition. A lot of people just vote party line. If we can't get our message out fast enough and broadly enough, come November people will be like "Wait, what? Green Party? I'm a Democrat, I'm voting Democrat." So there's that. Another branding issue the party has is that we're just, like a hippie party. People hear Green and go, "Oh you just care about the environment." One of my favorite things from the Jill Stein campaign was ordering a Truth and Reconciliation Commission to address history of slavery in the states, which I thought was a beautiful plank.

I would have a lot of trouble getting city-wide initiatives based on some of my policies. But what's great about the City Council is you have the power to do some local things. For example, whereas I could get a lot of public land into the hands of a community land trust, I probably would have a lot of trouble getting the entire City Council to start doing that. But I can use District 35 as a laboratory to show that this works, and I believe that it'll work, and I believe that'll be a very effective fight against gentrification.