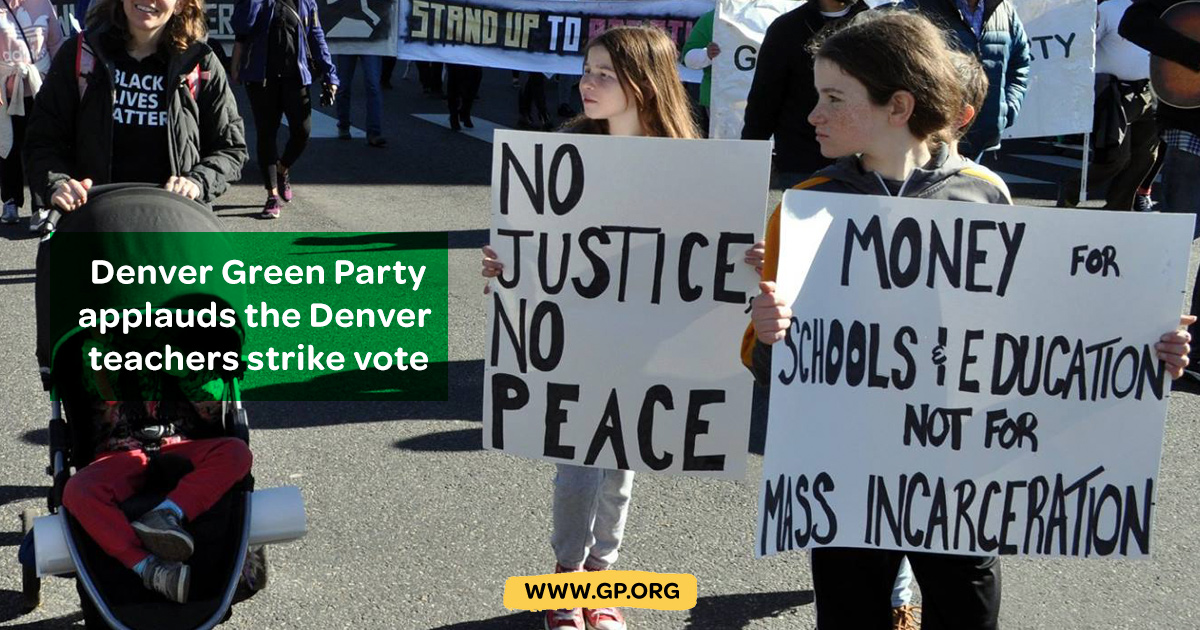 (Denver, Colorado, January 23, 2019) - The Denver Green Party expresses solidarity and unwavering support for the members of the Denver Classroom Teachers Association (DCTA), who voted last night to strike. The vote passed with 93 percent of members in favor of the move, the first strike in Denver Public Schools (DPS) in 25 years. The earliest strike date would be January 28, 2019.

DCTA's demands are largely focused on Denver's pay-for-performance system, called ProComp, which has resulted in teacher salaries 14 percent lower than other large school districts in Colorado.

"The Green Party is the only political party that unequivocally supports of the rights of workers to collectively bargain, and our national platform calls for recognizing the expertise of K-12 classroom teachers with professional status and salaries commensurate with advanced education, training and responsibility," commented Green Party of the United States national co-chair, Andrea Mérida Cuéllar, a former member of the Denver Board of Education. "For far too long, Ground Zero of the worst of the neoliberal public school agenda this side of New Orleans has been the Denver Public Schools."

Some of the nation's most aggressive "reform" policies have found their genesis in the Denver Public Schools, from the disruptive SchoolChoice program which often assigns the most vulnerable students to schools far from home, to a school co-location policy that forces privately-run charter schools into already-full public school buildings, to the accelerated implementation of 2010's Senate Bill 191, the "Educator Effectiveness" bill, which sparked the firing of experienced teachers, often of color, with deep roots in Denver's school communities and which scapegoats teachers for the impacts of poverty that often manifest in the state's battery of standardized tests.

Former DCTA member and teacher, Julie Bañuelos, who was also an at-large candidate for the Denver Board of Education, states, "the average bonus of DPS administrative personnel amounts to nearly $17,000 per year, while Denver's teachers have asked for a predictable and transparent alignment of salaries that restores cost-of-living increases the district has refused to pay since 2015." Banuelos continues, "the actual raise that the district is offering is only 0.4 percent, while their press releases tout 10 percent. This is a disingenuous manipulation of the facts."