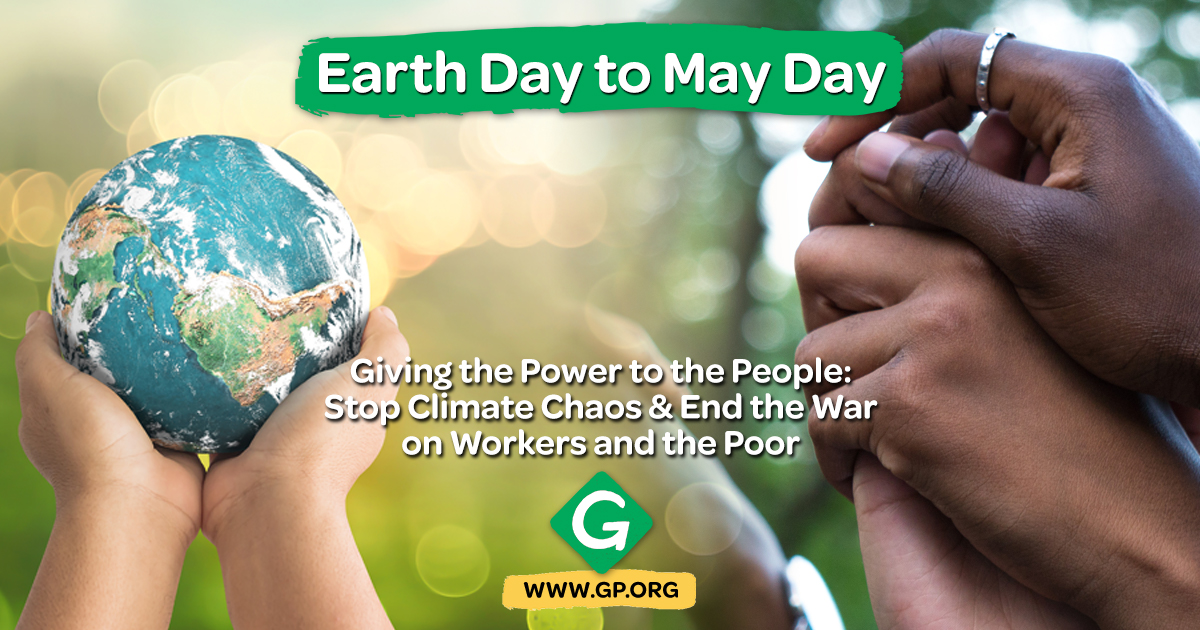 The Green Party Eco-Action Committee is calling on all Green Party state parties, locals and supporters to participate in ten days of events on climate change, environmental and social justice and labor issues from April 22 through May 1. Many of these actions can be online and educational events, however safely conducted outdoor actions are also highly encouraged, wherever possible.

Giving the Power to the People

Our theme for this nationally-coordinated series of actions will be Giving the Power to the People: Stop Climate Chaos and End the War on Workers and the Poor. This theme encompasses dire environmental topics, and celebrates worker resistance to corporate power. We invite well-organized locals and parties to have two or more events - to organize small Green direct actions, organize or co-sponsor online panels and discussions, and to join or endorse solidarity actions.

We want to focus on events that are organized by Greens to build focus and support for the Green Party as the only national party that does not compromise on issues of life or death. Remember - dozens of well-placed smaller and localized events can be far more effective than one big event (which unfortunately is not possible due to the pandemic).

We will be calling on greater public and local control of energy and polluter industries. We will also support cross-sectional issues such as living wages for essential workers and a comprehensive economic plan that addresses unemployment, enacts a national healthcare service, and puts people to work in jobs that will combat both climate catastrophe and living standard insecurity.

Some suggested topics for Actions and Educational Events:

Example Checklist for Planning an Online Webinar or Teach-In

Visit our Earth Day to May Day online calendar to see more events and submit your own!

Statements from 2020
Earth Day | May Day

Statements from 2018
Earth Day | May Day