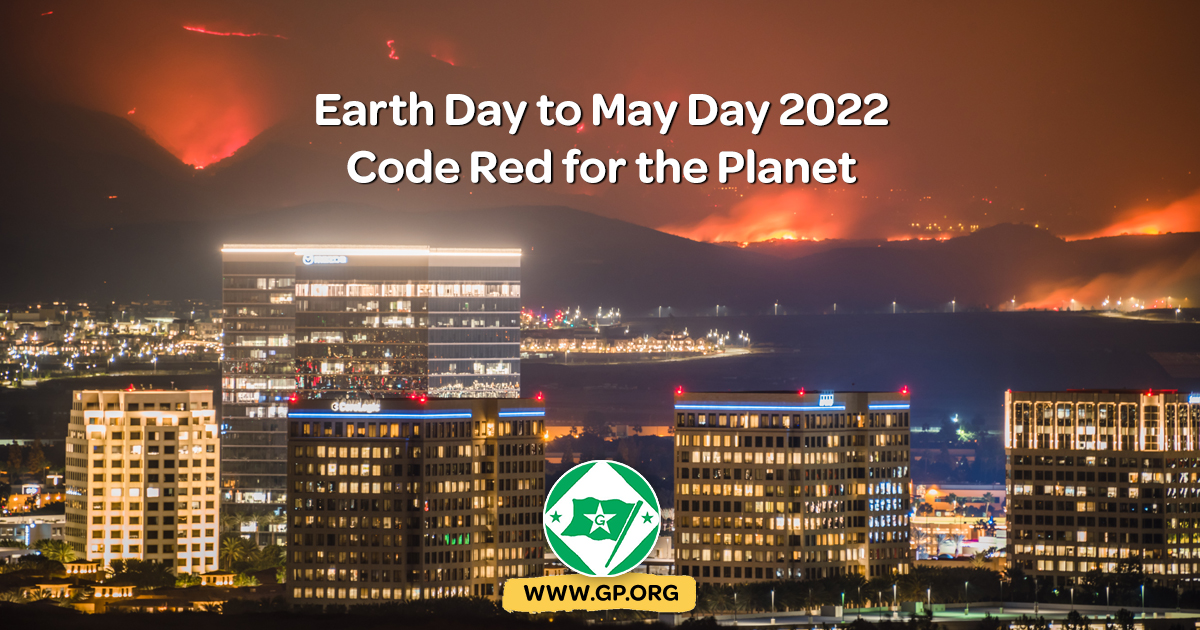 The United Nations has sounded the alarm that the steps taken by governments since the Paris Climate Accords six years ago are grossly inadequate to prevent climate collapse - or even keeping global warming below 1.5 degrees C.

At the present rate of emissions, we will use up our “remaining carbon budget” in 7 years. We need to act now, not call for fake goals such as net zero by 2050.

We need system change, not climate change. Another World is essential to the future of humanity. Please join us in this struggle by organizing events to highlight, “People, Planet and Peace over Profit.” Organize rallies, teach-ins, protests, call-ins. Occupy. Direct action.

In 2010, the Green Party of the United States launched a call for an ecosocialist Green New Deal (GND). We understood that in order to accomplish a rapid, ten-year transition to clean renewable energy and zero greenhouse gas emissions, the effort needed to transform to a society based on social and economic justice for everyone: no one must be left behind. It needs to embrace an Economic Bill of Rights based on a guaranteed living-wage job and income, expanded and improved Medicare for All, affordable housing, and education. It calls for slashing the military budget by at least 50% and transferring funds to domestic needs and climate reparations. End War.

The global pandemic has underscored the need to put the common good ahead of the profits and wealth of the 1%. As with climate change and fossil fuel pollution, the principal victims of COVID are the poor and communities of color. As usual, the profits of billionaires, Wall Street, and Big Pharma have soared while access to quality health care and treatment have been denied to many.

Movements for democracy & justice are rising up at home and around the globe – the Black Lives Matter and #MeToo movements; resistance to student debt & school-to-prison pipelines; movements for rights of workers, immigrants, women, LGBTQ & Indigenous peoples; for sustainable food, water, & renewable energy; Rights of Nature; uprisings against tar sands, fracking, nuclear power, GMOs & more. The accelerating climate collapse intensifies all of these struggles and provides new urgency for collaboration & action.

Many of us celebrated the removal of Trump from the White House – but essential reforms continue to be blocked. The only part of the federal budget that always gets more resources is the military budget. Both major parties continued to be dominated by the fossil fuel industry and their campaign donations. President Biden refuses to declare a climate emergency and to take needed executive action to advance climate action (see ClimatePresident.org).

We have the solutions to build a sustainable world – what we lack is the political will to do so. The threat to basic democratic rights in our country continues to accelerate as the push for authoritarian rule becomes stronger.

The EcoAction Committee of the Green Party has pulled together organizing resources for Earth Day to May Day – which we began organizing around, (along with social movement organizations and others, through the Global Climate Convergence), back in 2013 to highlight the connection between labor, climate action, and the rights of people and planet, including immigration. We want to work in collaboration with the many movements working for fundamental system change. The role of capitalism as the dominant economic system must be ended.

Read more about the Green New Deal | News | Contact Us