#EarthDay to #MayDay: Tell Biden and Schumer to "Follow the Science, Not the Fossil Fuel Money" 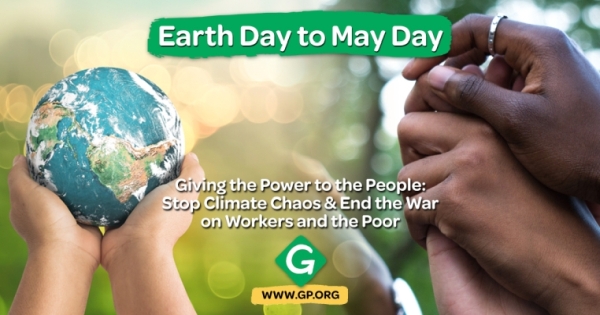 President Biden’s rumored climate goals of cutting greenhouse gas emissions 50% by 2030, reported in the press two days before his Earth Day Summit, is a step in the right direction but falls woefully short of what the science says must be done to avert a climate catastrophe.

Democrats love to lecture that "half a loaf of bread is better than none" but the President is offering half of a parachute when we’re about to be kicked out of an airplane.

The science has long been clear: 7 years remain, at the world’s present rate of greenhouse gas emissions, before surpassing the limit required to keep warming below the 1.5℃ threshold that will trigger catastrophic climate change. Extreme weather, species extinction and fracturing ice sheets threatening massive sea level rise are all accelerating.

That means a goal of zero greenhouse gas emissions by 2030. Aiming short of that is a plan to fail, before we even start.

The Green Party’s plan for a Green New Deal — to transition to 100% clean, renewable energy while ensuring living wage jobs and economic security for everyone — calls for an annual, multi-trillion dollar investment that will include:

We must slash the dangerous, bloated military budget (that devours over 60% of Congressional expenditures), enacting a carbon tax on polluters, and increasing taxes on the wealthy.

Congress must pass a ten-year, $4.1 trillion per year green economic stimulus to create 30 million jobs and accelerate the transition to 100% renewable energy by 2030. By comparison, Biden’s $2 trillion infrastructure stimulus barely scrapes the surface of urgent climate needs, with only $400 billion for specific climate measures, and even that is spread out over 8 years.

We must prioritize a Just Transition to guarantee good wages for existing fossil fuel workers and to invest in frontline communities that bear the greatest risk, both at home and abroad, who’ve long been the principal victims of fossil fuel pollution and climate change. The Green New Deal revitalization will include environmental reforms beyond energy and climate goals, such as stricter EPA guidelines for disposal of toxic waste and agriculture regulations for pesticides, herbicides and use of genetically modified organisms (GMOs).