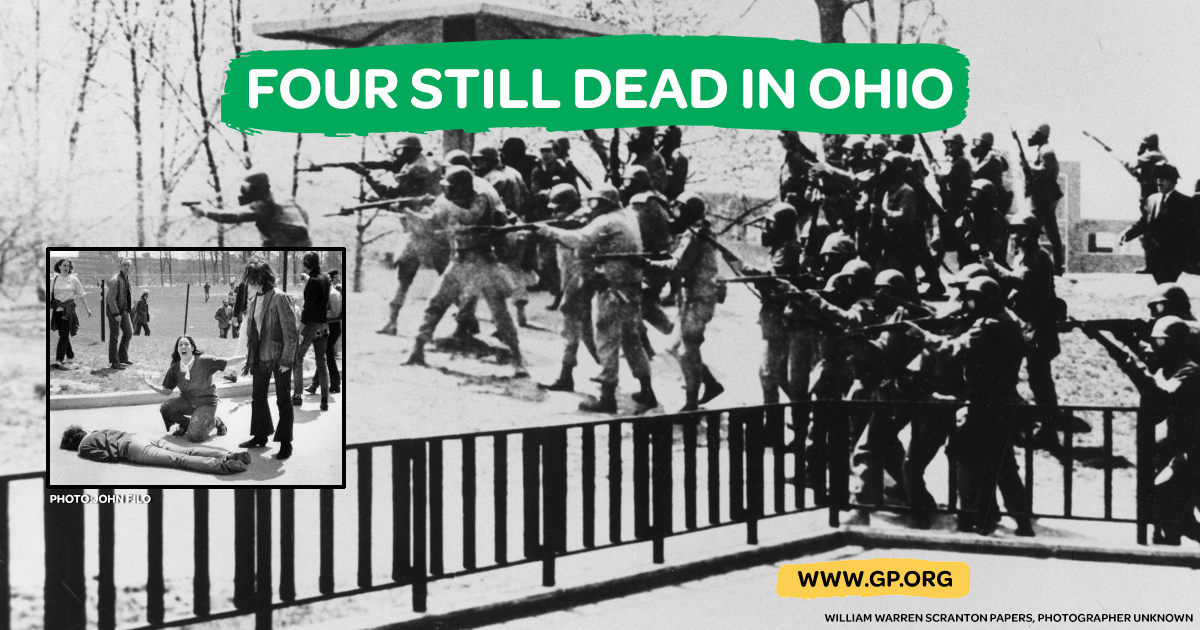 Back when "tin soldiers and Nixon" were "cutting us down" in 1970, a group of Ohio State University students and campus activists started an underground newspaper in Columbus. Driven mostly by the murder of four students at Kent State – Allison Krause, Jeff Miller, Sandy Scheuer and Bill Schroeder – shot during a demonstration that was opposing President Nixon's illegal attack on Cambodia and the Vietnam War, the Columbus Free Press was born.

Not surprisingly, the Free Press was the first western newspaper to expose Cambodia's killing fields thanks to international law professor John Quigley's reporting from Southeast Asia. In the first issue of the Free Press, the October 11, 1970 issue, a Free Press opinion attacked a special grand jury's decision not to indict Ohio National Guardsmen for the Kent State killings.

The Free Press wrote at the time: "The jury conveniently disregarded the FBI report which stated that the guardsmen were not 'surrounded,' that they had tear gas, contrary to claims of guardsmen following the shooting." The Free Press went on to point out the obvious facts: "…a film of the shootings shown on a northern Ohio TV station on the night of May 4th the slope, then turning, kneeling, firing a volley, and rising to fire a few more scattered shots before regrouping and going over the hill. Panic may have aided in the shootings, but it was not the cause.

THE GUARDSMEN FIRED ON ORDER, and the men who gave the order and the others who carried it out are free." Of course, the same could be said of George W. Bush and Dick Cheney who waged an illegal war against the people of Iraq and murdered over a million civilians, yet still walk free. And the war endured under President Obama. The Kent State precedent of letting known murderers move among us set the stage for the smiley-face pro-torture policies of the Bush years.

Former Free Press Editor Steve Conliff did his best to bring Governor James Rhodes to justice for inciting the National Guard to violence against peace demonstrators. At the 1977 Ohio State Fair, Conliff pied Big Jim, exemplifying the underground press motto – If you don't like the news, go out and make some of your own. Hardly the people's tribunal longed for by the Free Press staff, but nevertheless, great political theater. Local Free Clinic physician Pete Howison performed an experiment at Conliff's trial, proving that pie-ing did not constitute a violent assault. Conliff was found not guilty.

Rhodes was pied by proxy again in 1990 on the 20th when his statute, then on the Ohio Statehouse grounds, took a direct hit to the face by a strawberry cream pie, thrown by Howison. A photo of the red goop symbolically dripping down Rhodes' face appeared in the next Free Press issue. In 1992, the Free Press moved into an East Broad Street office that had an unusual wall in the back erected only three-quarters of the way up to the ceiling. When the office started leaking after a rainstorm, I climbed over the wall to determine the damage. Ironically, I found the original ACLU legal files containing documents from their lawsuit against the National Guardsmen at Kent State. The morgue photos of the dead students are seared into my brain.

When Jim Rhodes died, the Free Press made a Freedom of Information Act (FOIA) request from his FBI file. Here we learned the dirty truth of Rhodes' ties to the mob and the FBI's use of that information, some would call it blackmail, to win concessions from the governor. As the Free Press wrote in 2003, a January 14, 1963 memo noted that: "He [Rhodes] is completely controlled by an SAC [Special Agent in Charge] contact, and we have full assurances that everything we need will be made available promptly. Our experience proves this assertion."

The FOIA file revealed that the SAC contact was none other than Robert H. Wolfe, publisher of the Columbus Dispatch. Dispatch reporter Bob Ruth had earlier disclosed to the Free Press that Rhodes had run a gambling operation in the OSU campus area. His headquarters during the 1930s was allegedly Gussie's State Tavern, across the street from the law school. Serendipitously, the building would later house the shop Tradewinds, one of the early headquarters of the Free Press.

The FBI would cut the corrupt numbers man Rhodes all the slack he needed because: "He is a friend of law enforcement and believes in honest, hard-hitting law enforcement. He respects and admires [the] FBI." In 2007, the Free Press decried "The lethal media silence on Kent State's smoking guns" in an article I co-wrote with Harvey Wasserman. When tape-recorded evidence surfaced 37 years after the fact proving the original Free Press editorial to be correct, the mainstream for-profit corporate media, including the Dispatch, ignored it.

Rhodes' good friends in the FBI had in their possession a tape that documented that the guardsmen were ordered to fire. Prior to the shootings, Terry Strubbe, a Kent State student had hung a microphone out of his dorm window and captured 20 seconds of sound, including the gunfire. In an amplified version of the tape, a Guard officer is heard shouting: "Right here! Get set! Point! Fire!" Those, like the Free Press, who argued that there was an order to shoot the students were dismissed per standard mainstream media protocol as "conspiracy theorists." It's never too late to embrace the truth.

Rhodes was a mobster being blackmailed by the FBI who agitated his guardsmen against the students and was in the middle of a heated primary campaign for U.S. Senate. The day before the shootings, Rhodes is on record stating that student peace demonstrators were the "strongest, well-trained militant revolutionary group that has ever assembled in America. They're worse than the brown shirts and the Communists and the night riders and the vigilantes. They are the worst type of people that we harbor in America."

The Free Press demands a Truth Commission on the Kent State shootings. Let all sides present their evidence, even the well-trained propagandists and coincidence theorists who specialize in blaming the victims, usually for political or monetary gain. Four remain dead in Ohio and justice remains unserved.