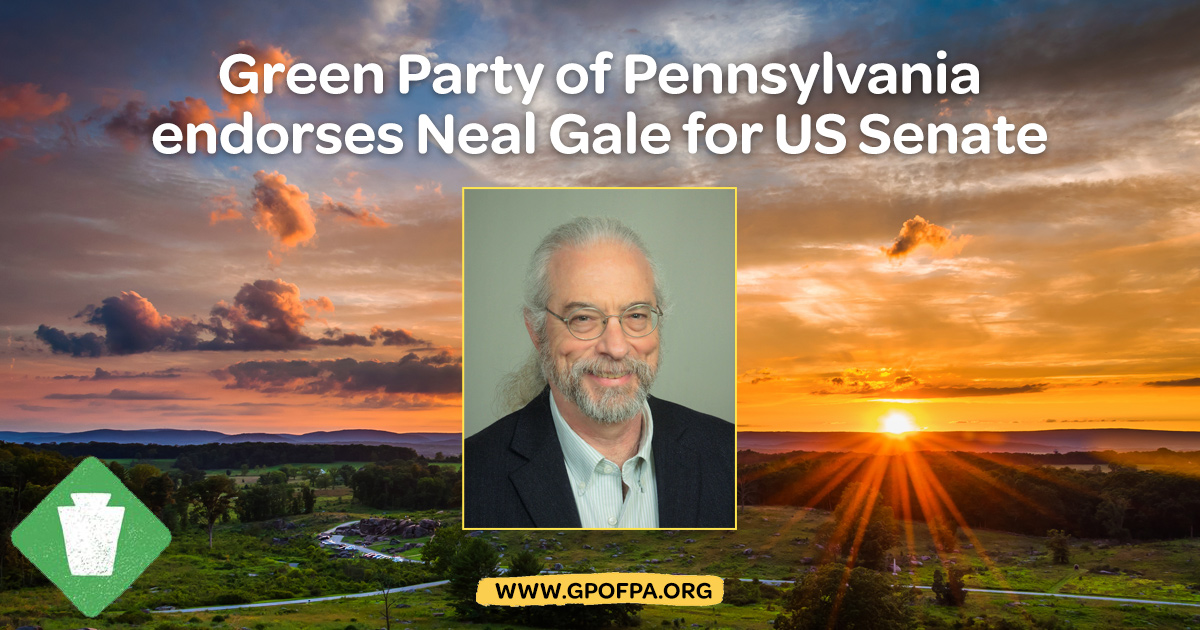 Scranton, Pennsylvania -- The Green Party of Pennsylvania (GPPA) endorsed Neal Gale as candidate for the U.S. Senate in Pennsylvania at their state convention on March 18. Gale said, "We have to be able to listen and talk to everyone regarding our vision of what this state and country can be. And that vision must include all citizens from every political persuasion."

Neal Gale is calling his campaign for the Senate, "One Family, Many Voices." He encourages voters to see themselves as nonpartisan stewards of the Commonwealth and its environment. Neal Gale believes in grass roots democracy urging citizens to get involved with politics especially as it relates to climate change. He desires that voters see themselves as protectors of the environment in Pennsylvania.

Neal Gale has more than 38 years' experience in energy efficiency, managing a low-income, energy affordability program. He lives with his wife and daughter in Abington, Montgomery County, and has been a resident of the state for 46 years.

"We need someone," said Gale, "who will stand up in the U.S. Senate to declare a state of emergency regarding our changing climate and the devastating impact it is already having on our communities, our state, around the country and across the globe."

As a candidate from the Green Party, Neal Gale is set apart from both Senator Casey and Senator Toomey. Consistent with Green Party values, he is staunchly against the resource-driven wars of late, believing government resources can be used more wisely.

"Both major political parties in Congress have just supported an alarmingly bloated military budget which will fund endless proxy wars by the U.S." Gale continued, "The Green Party is the only political voice for those who object to taxes being funneled to these wars in our name."

"As a Senator," Gale told the Green Party delegates, "I will have the power to initiate legislation that expresses the will of the people to protect the already compromised environment, reduce spending on the U.S. war machine and make more sound economic decisions for the economy."

For more information about Neal Gale for U.S. Senate or to become a volunteer, please contact 215-758-2361 or [email protected].