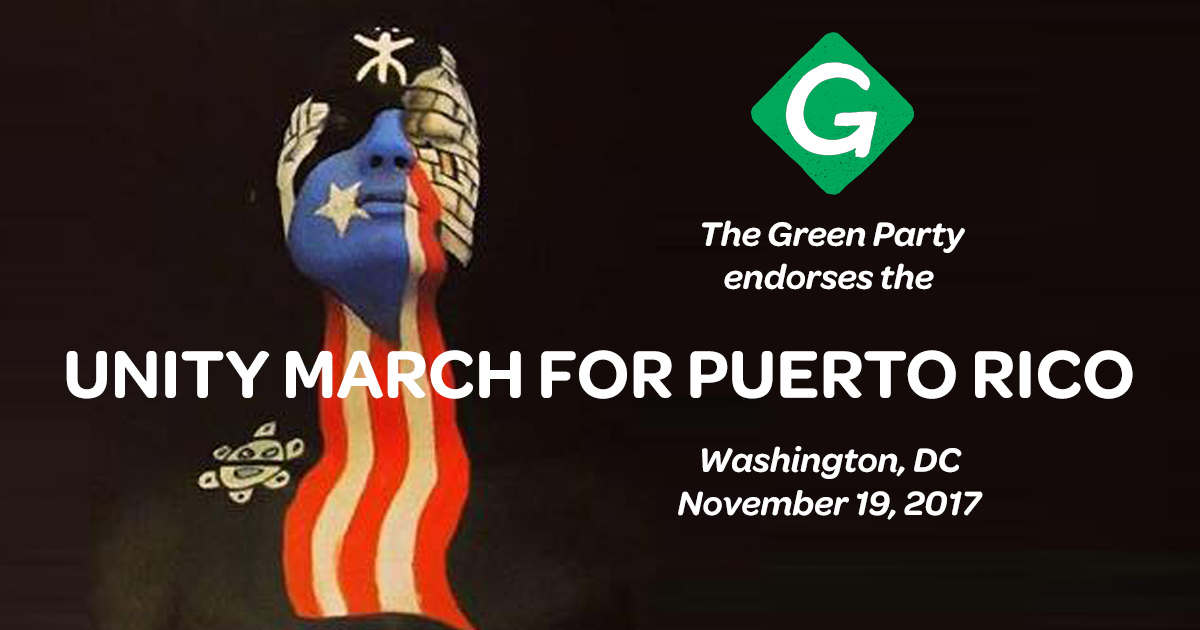 WASHINGTON, D.C. -- The Green Party has endorsed the Unity March for Puerto Rico, which will take place in Washington, D.C. on Sunday, November 19.

Green Party co-chair Darlene Elias will speak at a rally associated with the march. Ms. Elias spoke about the liberation of Puerto Rico before the U.N. Decolonization Committee on June 19, 2017.

Participants in the Unity March, including a Green Party contingent, will gather on the West Lawn in front of Capitol Building at 9:30 a.m., at 1st Street NW between Independence Avenue NW and Constitution Avenue NW, and march to the Lincoln Memorial. See also the Facebook page for the march.

The Green Party of the United States has called for cancellation of Puerto Rico's debt ($74 billion in 2016) and an end to austerity policies imposed on the island and endorses independence, decolonization, and self-determination for Puerto Rico.

The Green Party calls for massive relief -- not loans -- to help rebuild Puerto Rico, the Virgin Islands, Texas, and other areas suffering severe damage from Hurricanes Harvey and Maria. On Oct. 25, Green Party leaders declared their support for a demand from the Poor People’s Economic Human Rights Campaign for "international human rights observers [to be] sent to Puerto Rico to witness the extent of the devastation caused by Hurricane Maria and whether the recovery efforts are putting poor people before profits or are further contributing to Puerto Rico’s economic crisis."

According to the home page for the Unity March, "The mission of Unity March for Puerto Rico is to stand in solidarity – ONE people - ONE voice- against unjust laws that have been systematically oppressive and crippling to the people of Puerto Rico and the socio-economic growth and sustainability of the island.

"We are asking that our leaders ACT NOW and make the necessary legislative changes to uplift the people of Puerto Rico and hearten, support and sustain the economic growth of the island.