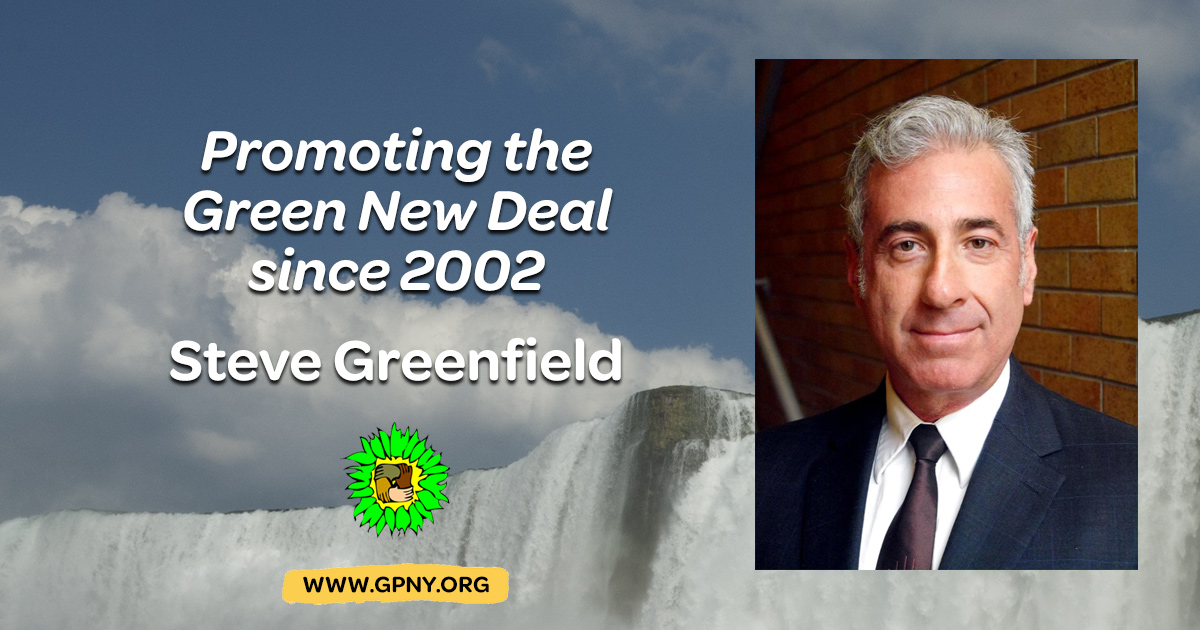 New Paltz, NY – On Wednesday night, August 29th, at the New York League Of Conservation Voters 19th District Congressional candidate forum in Callicoon, to which Green Party candidate Steve Greenfield, the only candidate with an extensive, specific, and fundable environmental platform, was not invited, Democrat Antonio Delgado's opening statement was nearly word for word what Greenfield had been handing out on a leaflet on the sidewalk just before the event, that described a sweeping renewable energy infrastructure development plan, right down to the title "Green New Deal."

Delgado had never mentioned it before, in over a year of campaigning, and despite the sudden change of rhetoric, remains opposed to The Off Fossil Fuels For A Better Future Act, HR-3671, the only pending legislation approximating the initiation of the idea, and specifying a project timetable.

"This is clear validation of the theory of bringing activism to the ballot booth, and in equal part a repudiation of "spoiler" theory. There can be no vote "siphoning," only vote appeal and attraction. If someone wants the votes an idea can attract, all they have to do is promote the idea. It's just that simple," Greenfield said. "Limiting ballot access, and news media and advocacy groups barring exposure to candidates outside the two major parties, prevents the kind of progress we saw tonight, serves the interests of those who do not want such progress made, and keeps half of America's voters at home. We should embrace multi-party elections."

After the forum, Greenfield and Delgado briefly spoke. "I shook his hand, told him the idea sounded great, and good-naturedly asked him where he got the catchy name," Greenfield reported.

Greenfield, who ran for Congress once before in 2002, had been touting the plan back then, calling it "transition to a post-fossil fuel economy." He observed, "had a bill with a 16 year timetable, like the OFF Act, been adopted the next year, it would be in the punch list phase now, with the next project queued up. Delgado will not specify a timetable, or a revenue stream to fund it. Without that, it's just talk. I've been consistent on this matter for 16 years now, and will remain so. Climate change is not waiting while we debate incrementalism. The crisis is here, now. The only changes we get are the ones for which we vote."