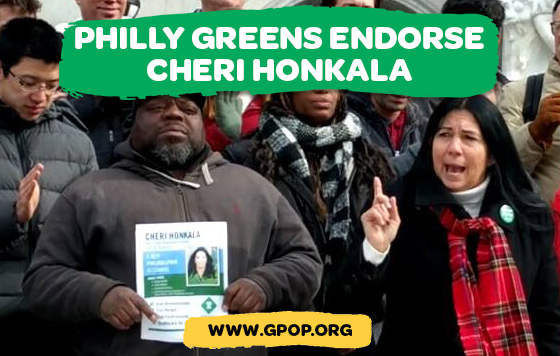 Cheri Honkala, candidate for Pennsylvania State Representative in District 197, has been endorsed by the members of the Green Party of Philadelphia (GPOP) at their January 25 General Membership Meeting.

Green Party of Pennsylvania endorsed Cheri Honkala at their State Convention on January 29. Honkala will campaign as the Green Party candidate in a Special Election scheduled for March 21. She ran for Sheriff of Philadelphia in 2011 and for Vice President of the U.S. in 2012.

"Democrats have been playing games with our lives in Philadelphia and especially inDistrict 197, and I plan to do everything I can to change that in Harrisburg," Honkala said at the GPOP meeting in Roxborough.

Honkala, a formerly homeless, single mother, co-founded the Kensington Welfare Rights Union in 1991 and, in 1998, launched the Poor People's Economic Human Rights Campaign, where she currently serves as the National Coordinator.

"Cheri has worked tirelessly on behalf of families who face homelessness and poverty long before she ever considered running for office," said Galen Tyler, chair of the GPOP City Committee. "She knows their pain and the real struggles they face everyday because she has walked in their shoes."

Chris Robinson, the GPOP membership secretary, declared, "The Green Party is proud to run a candidate with Honkala's qualifications, dynamism and unbridled opposition to poverty."

The Special Election is scheduled for Tuesday, March 21, to fill the seat left vacant by convicted felon Leslie Acosta (Democrat), who resigned in January after pleading guilty to a federal felony charge of conspiring to commit money laundering.