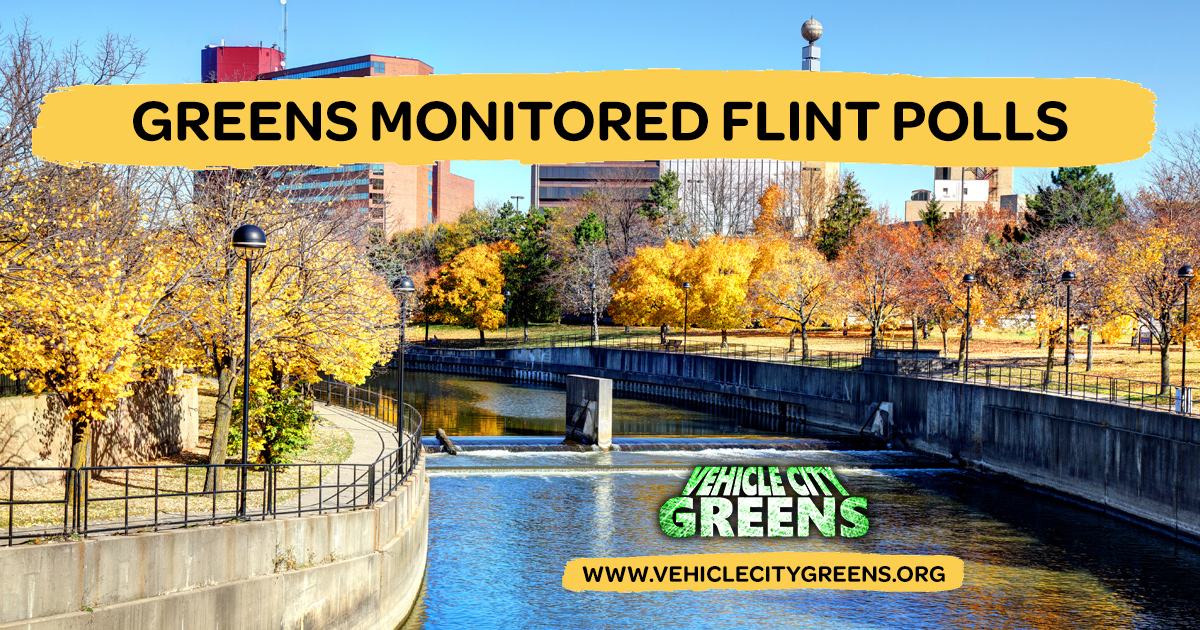 "The Green Party is serious about the issue of election justice," said Group Leader John Early. "The laws of the State of Michigan allow political parties to have oversight over the election process. We want election workers to know that they are being held accountable to run the election in a fair and accurate manner and for voters in Flint to know that the Green Party intends to support their right to democratic and honest elections."

"Election challengers are important because elections need to be monitored. We have to assure that our elections are being conducted with integrity," remarked Carlos Valdez, a volunteer from Flint.

Valdez observed problems with a voting machine in the 11th Precinct. Election workers told Valdez that they would prefer to work with paper ballots and records and less computerization. "We are here because we want to ensure democracy is functioning as it should," he said. "Voting is a civic duty and I came here today to make sure that everyone's voice is heard." Valdez noticed one voter being turned away in the 8th Precinct because records showed the voter was registered in another city. The voter was not offered a provisional ballot.

"We observed some minor issues at some precincts, however there were no issues found at many precincts" said Erin Fox, contact person for the local group. Fox served as a challenger in Wards 1 and 3. "The machine counts matched the numbers in the books at all but one location that I visited, and we were able to work that discrepancy out rather quickly," he said. "We were happy with the receptiveness of the Election Chairs to work with us to iron out minor issues. In spite of the fact that poll workers are not used seeing Challengers in Flint, we were able to work constructively and cooperatively to address the issues that our volunteers uncovered."

The group plans to staff all Flint wards with volunteers during the 2018 General Election. You can learn more about the local group by visiting www.vehiclecitygreens.org