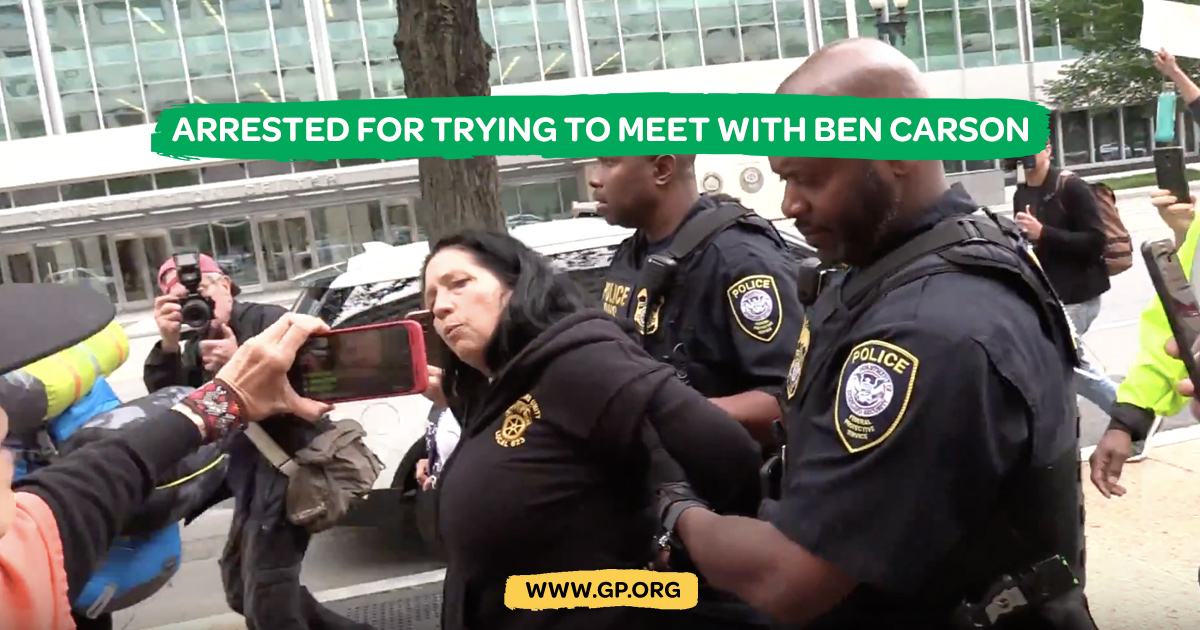 Washington D.C. – During the afternoon of June 11th, Cheri Honkala was arrested by the Department of Homeland Security while leading a demonstration for public housing.

The following reports are courtesy of The Trinity River Lookout.

Cheri Honkala made it out of jail last night. I found out the charges earlier today. The security at HUD and DHS charged the poverty and homeless activist with trespassing on "private property" which was paid by and for the people of this country through taxation. This was a federal building that operates for the American people; but when the impoverished and the homeless demanded a meeting to discuss legislation that threatens their livelihoods and push more souls out of their homes and on the street, HUD officials determined that the best course of action was to push out the activists with false promises and to arrest the organizer.

Thankfully she is out now, while this article dictates news that the activist knew two days ago, but to those who have not kept up with every crumb of information that comes out this might be wonderful news. This arrested did not dissuade nor stopped the powerhouse that is Cheri Honkala. After meeting with her today she was just as heartfelt and dedicated as she was yesterday during HUD.

In fact her and other activists went up to the chamber of commerce with a demand of a meeting. Unfortunately they weren't allowed into the building and the security forced them off the stairs. No one got arrested. Another tidbit of info that came out yesterday, through conversations I had with the activists was that their encampment was taken down.

Due to the Park rangers and other law enforcement who broke the permit made to legalize the encampment on Dupont Circle. They came in mass lined up in rows, surrounding the Dupont Circle, acting like vultures trying to arrest the homeless who is apart of Cheri's crusade against poverty and homelessness, thankfully no one got arrested.

During the last day of their occupation of Dupont Circle, a group of people brought food to the homeless, and the group got together to say their goodbyes and to pray. It was an emotional moment for many.

Later that day Cheri went to WPFW 89.3 to co-host the homeless marathon where the homeless around the world told their stories of struggle. They had people from London to D.C. call in. I also had the opportunity to interview Cheri Honkala, more on that later in the month.

Today marked the last day of the Poor People's Economic Human Rights Campaign, on the 50th anniversary of Martin Luther Kings Jr. march up to D.C., made not up of politicians, nor rich entrepreneurs, nor lobbyists, nor corporations nor even the middle class. But by the actual impoverished and the homeless around Philadelphia, California, Florida, and from other places around the United States.

All they wanted was to be heard and the federal departments refused to listen; while the mainstream media ogles on the White House and spy with glee across the sea towards Russia. Oblivious to the struggles of the American people. Those who Washington have deemed as second and third class citizens not as important as the lavished who occupies the high rises in downtown or the corporate elite who help oil the wheels of our water down democracy.

Some might have heard of the Poor People’s Economic Human Rights Campaign and their perilous march from Philadelphia to D.C., suffering from a few arrests to a protestor being taken to the hospital due to existing medical conditions earlier this morning. But one event that happened during the protest/occupation of the Housing and Urban Development building troubled many.

Cheri Honkala, a long-time activist, vice president nominee for Jill Stein in 2012, a single mother, and an all around Badass was arrested after the security of HUD deceived her and other protestors. Around 10:00 am in D.C. multiple activists including homeless and poor people met up at L’enfant, an enormous shopping center right next to the HUD to plan and coordinate the occupation of HUD. Those who went in carried signs under their shirts detesting HUD for their outrageous and appalling legislation that has wormed it way through thanks to Ben Carson.

Once the activists went through the front door, opposition from the security was fast. Cheri and a Californian activist named Tiny went through the security checkpoint and stood there demanding to see a higher up to explain the legislation that the HUD puts forth. The security guards gave them a demand, get half of your group outside the building and a HUD official will talk to Cheri. Half the group left, then the security guards demanded that the press (Journalists and live-streamers) vacate the building, which we were very hesitant to do, but everyone was hesitant of the security.

While most of the activists stayed inside the area between the lobby and outside to prevent being shut out. Homeland security showed up and ordered everyone outside. Once everyone besides a few activists who were allowed inside due to past agreements between the security and the activists, the guards locked the door to the building effectively shutting everyone out. Took them awhile as the security guards apparently did not know how to lock their own building up.

A little while after we saw Cheri walk into a hallway with numerous security personnel. When she walked back into view a few minutes, Cheri realized that they were leading her to a side door to kick her out. She stopped and promptly the DHS stooges arrested her. They forced her into the police cars with activists yelling and trying to question the DHS to figure out where they were taking her. Cheri stated she could not feel her left arm. The activists called up a lawyer and escorted him to the police station where Cheri was being processed.

More to come when more information becomes available about Cheri’s arrest. DHS have not stated why they arrested her.