On Monday Paste, published an article I wrote in which I asserted that the Clinton campaign was engaged in illegal coordination with super PACS.

That piece, titled, “John Podesta Discussed Super PAC Coordination in Email with Hillary Clinton,” which covered an email exchange between Clinton, her campaign chair, Podesta, campaign manager, Robby Mook, general counsel, Marc Elias, and communications director, Jennifer Palmieri, discussing how to deal with Republican coordination with super PACs the day after The New York Times published an article about how partisan divides among the FEC’s six commissioners paralyzed the agency. In the exchange, Elias and Podesta make several comments regarding the Clinton campaign’s own coordination, which hinted at illegality. For example, Podesta asserts the need to get “Priorities functional,” and Elias weighs in that any action taken against the GOP should be measured so as not to backfire on “Priorities, et al.”

“It would be hailed by the reform groups,” he writes, “but is a significant step in legal escalation and will certainly result in similar action against Priorities et al.”

Now, a newly released memo, uncovered in the latest Wikileaks dump of Podesta’s emails by The Young Turks’ Emma Vigeland, and sent to Hillary Clinton by Marc Elias following that email exchange, has shed new light on the story.

Attached in an email sent two weeks after the exchange I reported on, this new piece of evidence describes in detail the planned coordination engaged in with both Priorities USA Action (Priorities) and Correct The Record (CTR), two super PACs clearly affiliated with the campaign, and provides an interesting perspective.

CTR has long been criticized for its announcement that it would engage in coordination with the Clinton Campaign. Citing a legal loophole, CTR enraged campaign finance reformers with what they considered to be illegal activity, announcing AstroTurf efforts over social media to assist Hillary Clinton. In June I wrote a piece about this supposed loophole.

Under the Code of Federal Regulations, activity is coordinated with a candidate, campaign or committee when it satisfies what is known as the three-pronged analysis: Payment, content, and conduct. When that happens, unless exempted, it is treated as an in-kind contribution or coordinated expenditure. We can spare ourselves the nitty gritty of each of these prongs because CTR has openly acknowledged that its activities meet the requirements to be considered coordinated. Beyond that, we have emails that all but confirm it, like this one Jordan Chariton of The Young Turks turned up: 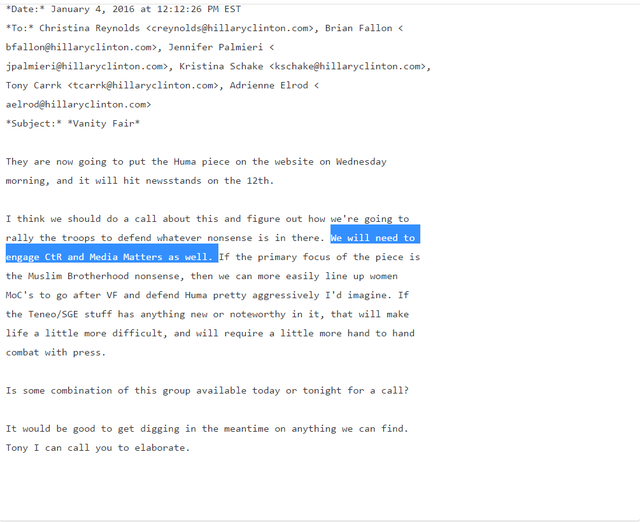 That said, it insists that its activities are legal due to the uncompensated internet activity exemptions found in § 100.94 and § 100.155 of the code. The language is essentially identical whether referring to contributions and expenditures…here’s what is says, slightly paraphrased:

When an individual or a group of individuals, acting independently or in coordination with any candidate, authorized committee, or political party committee, engages in internet activities—sending or forwarding electronic messages, providing a hyperlink or other direct access to another person’s Web site, blogging, creating, maintaining or hosting a Web site; paying a nominal fee for the use of another person’s Web site, and any other form of communication distributed over the Internet, etc—for the purpose of influencing a federal election, the individual’s uncompensated personal services related to such Internet activities are not considered a contribution or an expenditure respectively.

Author’s note: Be aware that the preceding paragraph is a slightly edited version of the exact wording of the law. It is not intended to be plagiarism, but rather the most accurate/most accessible way to present the information to my readers.

As I, and many others, noted at the time, this uncompensated internet activity loophole did not appear to apply to CTR given the fact that the super PAC’s staff is/was paid.

The Campaign Legal Center, a watchdog group The Intercept previously reported on, filed a complaint against the super PAC, raising this very point:

The factual record demonstrates that the vast majority of Correct the Record’s expenditures have been for activities like opposition research, message development, surrogate training, reporter pitches, media booking, video production, “rapid response” press outreach, and other “earned media.” Any such expenditures made in “cooperation, consultation, or concert, with, or at the request or suggestion of” Clinton’s campaign committee constitute in-kind contributions to the campaign. 52 U.S.C. 30116(a)(7)(B)(i); 11 C.F.R. § 109.20.

The newly uncovered Elias memo however, suggests that, at least for some of its online activities that would fall under the code’s umbrella definition of ‘coordinated,’ the super PAC does compensate its employees.

Correct the Record (“CTR”) announced this week that it will operate in coordination with Hillary for America. CTR will disseminate all of its communications via email, its own websites, and “free” social media channels (e.g. Facebook, Twitter, YouTube). It will not pay for digital communications and it will not pay for broadcast advertisements, phone banks, mass mailings, or canvassing programs.

But this revelation raises further questions. Who is organizing these activities if not paid staff? Is the unpaid execution carried out by staff who are otherwise paid? How would that even work?

I reached out to CTR in reference to these inquiries, but did not hear back.

Regardless, even if the answers to these questions were favorable to CTR, the super PAC is not out of the woods yet—as David Keating, the president of the Center for Competitive Politics, a nonprofit that supports deregulation of campaign finance, points out.

Referencing the complaint, Keating tells me, “It’s not clear to me that Correct the Record limited its activities to the Internet-only speech contemplated by the memo.” He did add, however, that in his opinion, Elias’ memo seemed accurate.

The legality of CTR’s activities and plan is questionable at best.

The new Elias memo also discusses the activities of Priorities, the super PAC named in the email chain I reported on Monday.

Under this theory, the campaign could collaborate on television ads sponsored by Priorities USA Action more than 120 days before the primary in each state, as long as the ads lacked express advocacy, its functional equivalent, or republished campaign materials. The advertisements would focus on a public policy issue; praise your position on the issue or criticize an opponent’s; and urge viewers to take an action in support of your position (or in opposition to your opponent’s). The advertisements would not focus on your qualifications or fitness for office, and would not refer to elections, candidacies, political parties, or voting by the general public. Finally, while your campaign may have significant input on such a communications program, Priorities ultimately would have to direct and control it.

While we believe that such a program is legally permissible, it would be breaking new ground – more so than what CTR is doing.

In the course of our conversation, Keating, who overall takes little issue with Elias’ memo, cautions that others may disagree with this point. There is a reason Elias writes that the campaign would be “breaking new ground.”

The language of the content prong in the three-prong test for coordinated communications, is broad. Specifically, 11 CFR 109.21©(2) provides ample ammunition for those who would contradict Elias’ assessment that the law only applies to express advocacy:

A public communication, as defined in 11 CFR 100.26, that disseminates, distributes, or republishes, in whole or in part, campaign materials prepared by a candidate or the candidate’s authorized committee, unless the dissemination, distribution, or republication is excepted under 11 CFR 109.23(b). For a communication that satisfies this content standard, see paragraph (d)(6) of this section.

The FEC’s website lends credence to this challenge by listing express advocacy as but one type of communication that can count as coordinated. 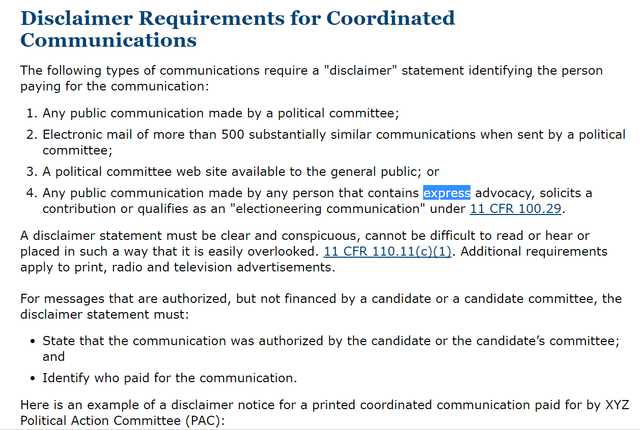 And so here again we find questionable legality in the planned coordinated activities of the super PAC. Meanwhile, from the Wikileaks releases it is plain to see coordination did occur.

Elias concludes his memo by insisting that the campaign is doing nothing wrong, but it is apparent that this confidence is based on the facts discussed in the Times piece which triggered the email chain I initially reported on: The FEC is gridlocked between its three Republican commissioners, opposed to regulation and enforcement, and the two Democrats and one independent who favor cracking down. If that balance remains, Clinton’s campaign is in the clear.

But the campaign will not always be able to avail itself of these extraordinary circumstances, as Elias makes clear in the initial email exchange. “The statute of limitation is 5 years” he writes, “and the composition of the FEC will change in the next two years due to turn over at the Commission.”

Accountability could occur with a simple change of one of the Republican commissioners. Ironically, the Democratic presidential candidate is unlikely to initiate this replacement as such a move would make her susceptible to legal suit and potential punishment (at least until the five year statute of limitations runs out).

And so, for at least the foreseeable future, the FEC’s hands are tied. This where Jill Stein comes in.

Jill Stein’s role as savior of our electoral system

Readers may have noted that in the initial email exchange in my previous article, the Clinton campaign’s general counsel says the following:

4. Per John’s question below — there is one legal tool we could use that might slow them down. The law has a little noticed or used provision that says that if a complaint has been filed and it is either dismissed or not acted upon within 120 days the entity that filed the complaint can sue the FEC to force it to proceed with enforcement. If the FEC fails to move forward, then the complainant is permitted to bring their own lawsuit to enforce the law directly. IF it were announced that this was the path we intended to take, it would both make news and perhaps give pause to the groups. Is this something we want to push forward? If so, would we want the DNC to do it? The campaign? Or would we prefer it be done externally? It would be hailed by the reform groups, but is a significant step in legal escalation and will certainly result in similar action against Priorities et al.

Significantly, however, not all complainants would be able to maintain a successful action in court. Federal courts have consistently held that a complainant must have proper “standing” to maintain a claim – that is, the complainant must show that the FEC’s failure to act has caused the respondent an injury-in-fact that could be redressed by the Court’s grant of the requested relief. Hillary for America could establish what is known as “competitor’s standing” if it filed a complaint against a Republican presidential candidate or Super PAC supporting a Republican presidential candidate and then sought judicial action in response to the FEC’s failure to act. Likewise the DNC or another political committee that endorses candidates, would likely have standing. But if the complainant were a nonprofit organization that did not endorse presidential candidates, it might have a harder time establishing standing.

Taken together, these paragraphs provide a how-to guide for a third party candidate, like Dr. Jill Stein of the Green Party, who supports regulating campaign finance and having fair elections, to take potentially devastating legal action against Clinton (and possibly Trump, as noted in my original piece).

If Stein pursues this path, it could upend the entire political system as we know it-especially given the emails indicating Clinton knew of the coordination. If she or her campaign were to be held accountable, it would undoubtedly send a shock wave through Washington.