Meet Cliff Willmeng, Who Could Be First Socialist Elected in Boulder County 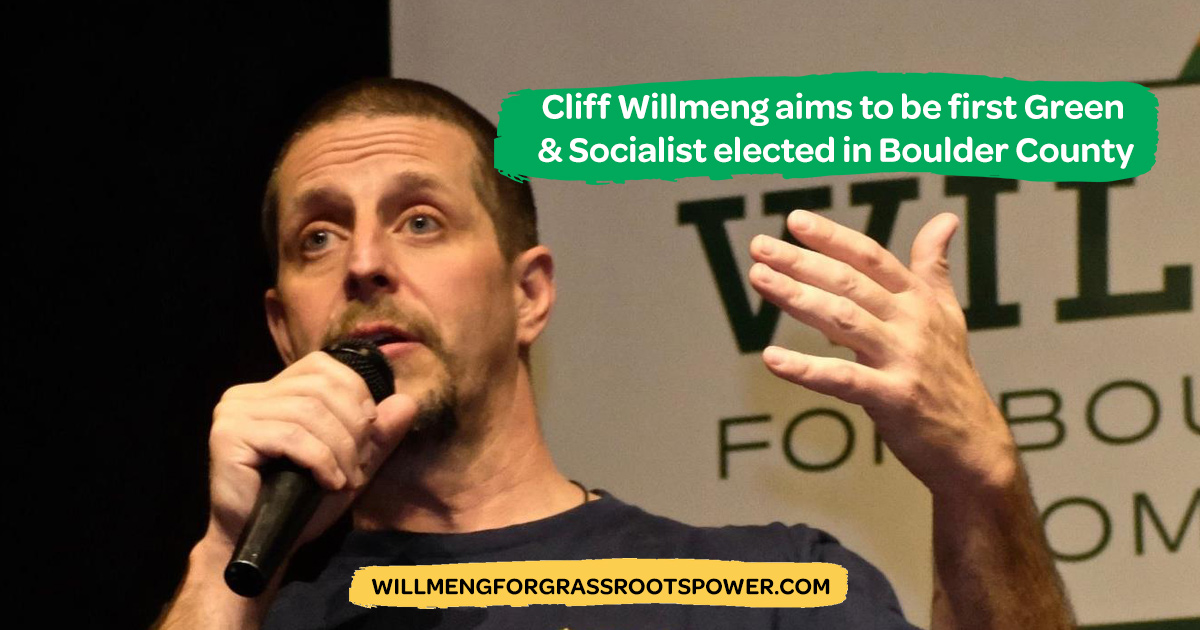 Cliff Willmeng is the Green Party candidate for Boulder County commissioner. He's also a socialist, and he sees his possible win in the November election as "a game changer... . Coming into office as Boulder County's first socialist would be historic. I don't know how else to describe it."

In discussing what a socialist Boulder County might look like for a recent Westword post, Boulder County Democratic Socialists of America co-chair Austin Bennett noted his organization's endorsement of Willmeng and Theresa Stets, a hopeful in House District 12. Bennett also stressed Boulder County DSA's close relationship with East Boulder County United, which Willmeng helped found, as well as his belief that local government would be improved if typical working folks had a fighting chance to win at the ballot box there.

Willmeng, who'll take part in a meet-and-greet event in Lafayette tonight, August 15, and an August 23 community forum in Longmont, fits this last description. "I'm a registered nurse, and within that capacity, I'm also a union member of UFCW Local 7 and a vice-president of that same union."

In addition, Willmeng is married with two kids, ages eight and ten. When the family relocated from the Chicago area to Lafayette nine years ago, he recalls, "I had a background in political activism, fighting against U.S. military involvement in Central and South America, and I took part in the World Trade Organization protests in Seattle in 1999. But when my wife and I moved here, it was with the belief that we were going to become boring suburban parents — and we completely failed at that."

True enough. In Colorado, Willmeng has been heavily involved in local environmental issues and says that "through the absolutely heroic efforts of the public, we politically forced fracking to a halt" in Lafayette. Not that this fight is over. "Where we live, we're right up against the Weld County border — and Boulder County government, as well as the State of Colorado and the oil and gas industry, anticipate that there will be at least 1,800 oil and gas wells mainly located on the eastern edge of Weld County, where Lafayette sits."

Moreover, he continues, "the elementary school where my kids go is currently in the drilling plan — because they drill horizontally. When you submit what's called a spacing plan to drill in an area, you have to say, 'We're going to extract oil and gas from this area.' And when you look at the plan, it goes right under the school, right under the rec center and open space. It even goes under my mom's house."

His mother is Merrily Mazza, who preceded him into public office. Also a Green Party candidate, she was elected as a Lafayette City Council member in November 2013 and reelected four years later. She's best known for sponsoring Lafayette's Community Bill of Rights, which banned oil and gas development within the city limits.

After the measure lost in a court challenge backed by the Colorado Oil & Gas Association, Mazza put forth the Climate Bill of Rights, another ordinance that forbade fracking. It passed and currently remains in effect.

In 2015, Willmeng tried to follow in Mazza's footsteps by way of his own bid for a spot on the Lafayette City Council, but he characterizes it as "far less of a serious campaign, simply because we had almost no time to put it together." He considers his attempt to become a Boulder County commissioner to be "a much more organized and considered effort. We started the campaign in January."

In some ways, he remains surprised by this turn of events. "If you would have told me five years ago that I would be running for political office, I would have thought you were crazy," he concedes. "This isn't something we had any ambition for or even thought about, really. But I'm running for office because the situation demands it. I've been conscripted in some ways."

When asked to define his brand of socialism, Willmeng says, "the fastest and most succinct description that I use is that it means a democratically run economy and world. We view the vast majority of global and local problems as stemming from a very undemocratic system that is run on the basis of private profit. And we understand that given the crisis of the environment and the climate, the massive attacks on working-class people and the repression of people of color, all of these things relate to a system that operates with human and environmental needs as an afterthought, if not in direct opposition to those considerations. This plays out at every level of government — and Boulder County is no different from that."

His platform as a county commissioner candidate "starts off with the environment. Turning Boulder County into an oil field would be so damaging to every aspect of our lives. So we talk about banning fossil-fuel extraction, and there are a couple of other projects that we want to put a stop to, including the expansion of the Gross Reservoir and the Martin Marietta gravel mine in the St. Vrain Valley. I'm also running as a rank-and-file union member, and the working class in Boulder County and nationally has been completely ignored or made to feel invisible. So we want to talk about family medical leave for Boulder County workers, nurse-to-patient ratios and creating living wages that can keep up with Boulder County's living costs."

Additionally, he continues, "we talk about restructuring county government so we can have home-rule status that would allow direct decision-making for the community, expanding the number of commissioners, county support for regenerative agriculture, infrastructure projects like public transportation and rail, and also public banking," a concept recently lauded in this space by Denver mayoral candidate Kayvan Khalatbari.

About the latter, Willmeng says, "the more you learn about it, the more compelling it becomes. It's like a public option to health care, because it removes the weight of private profit from all those funds. Boulder County has a budget of $430 million — so a public bank could create all kinds of stuff, from organic farms to light rail to refinancing of student loans and refinancing mortgages across the county. It would inject titanic amounts of funding into all of those programs. And while it would come at the cost of corporate banking, that's a fight we want to be in."

The major-party candidates for Boulder County commissioner are Republican Gary Cooper, a real estate broker, and Matt Jones, who Willmeng notes is "a Colorado state senator who's been a professional politician for many years."

As part of its effort to compete, Willmeng's campaign has issued the following video:

In Boulder, Democrats tend to win by default, but Willmeng isn't interested in switching teams. In his words, "If we felt our issues could be adequately addressed, or even remotely addressed, through the Democratic Party, we wouldn't be running for office. The fact is, the Democratic Party in Boulder County is part of the same corporate apparatus you would see in any other part of the country, and that needs to change. The cost of that type of collaboration with corporate interests and the needs of negotiating against the needs of the local environment — it's got to change, and change substantially. I used to be in the Democratic Party, and if I felt for a moment that the changes we need could come through that organization, that's where we would be. But we've concluded it's far too politically compromised to reflect the needs of the environment and the people at this stage."

As such, "our obligation is to get our ideas out to the community on an enormous scale," he maintains. "The political class in Boulder County is very comfortable. They don't want competition for ideas. So we have to drive the narrative, and the only way you can do that is through walking in the communities, going door to door and getting the ideas out there in the public. And that's all starting to happen, which is great. We're feeling an enormous amount of support and a kind of acceleration." In addition to the Boulder County DSA's backing, he's been endorsed by Our Revolution, which he calls "the Bernie Sanders folks in Boulder," and numerous unions.

Regarding Willmeng's assertion that he would be the first elected socialist in Boulder County, a spokesperson for the local election bureau confirms that no Green Party member has been voted onto the commission to date. Likewise, party affiliations that include the word "socialist" are absent from its system.

To Willmeng, the socialist label is far less stigmatizing today than it might have been in the past. He marvels at "how open to new political strategies people seem to be right now. Maybe it's just because the old ways are so obviously not working anymore. But the real challenge for this campaign is getting the ideas out fast enough, connecting with people, having conversations and discussions, and engaging in what everybody all agrees on. And we're learning how ready people are for authenticity in political life. That's a walk we need to walk."

Tonight's meet-and-greet with Cliff Willmeng gets underway at 7:30 p.m. at 589 Wild Ridge Lane in Lafayette. Learn more here. The Boulder County Community Rights Forum is scheduled to take place from 7 to 9 p.m. on Thursday, August 23, at 7891 Hygiene Road in Longmont. Cliff Willmeng is among those slated to participate. Click for more details.