Green Party of Michigan nominating convention in Flint on May 5 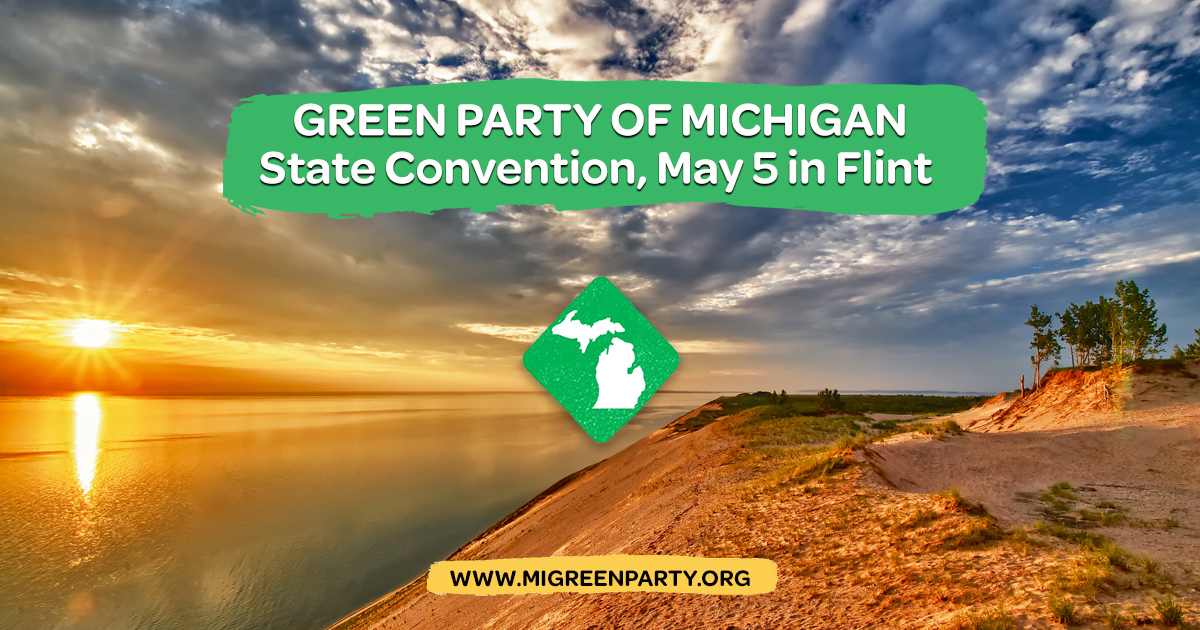 (Flint, Mich) -- The Green Party of Michigan will hold its 2018 state nominating convention in Flint on Saturday, May 5. Registration begins at 9 am. The convention takes place from 10 am to 5 pm at the University of Michigan-Flint, Harding-Mott University Center, 400 Mill St, Flint MI 48503. Candidates seeking the Green Party nomination for federal, state, and local partisan elected offices (or endorsement for non-partisan offices) will be present, vying to represent the party in the November 2018 election.

A press conference with nominated candidates will take place at the end of the convention at 4:30 pm. The convention agenda and brochure is available here.

Green Party members to gather in Flint from across the state to nominate federal, state, and local candidates

Press conference with candidates at 4:30 pm

This will be the Green Party of Michigan's tenth convention since it earned its place on the Michigan ballot in 2000. Conventions and county caucuses are how the Green Party and other alternative parties nominate candidates for the November general elections.

The state party's elections coordinator Eric Siegel points out that the state-law-required convention/caucus system doesn't bring Green nominees the publicity of taxpayer-financed primary elections. "Every candidate we nominate has to show a solid commitment to the party's values and platform," said Siegel.

Those values include the Four Pillars of all US Greens: grassroots democracy, social justice, ecological wisdom, and non- violence. The Green Party of Michigan applies its values to key issues of the day in its 2016 Platform, which will be available at the convention.

The Green Party of Michigan's 2016 platform can be seen at the website www.migreenparty.org Green Party members who would like to be considered for a possible Green Party nomination for partisan elective office should contact Elections Coordinator Eric Siegel prior to May 5 at [email protected] for the vetting questionnaire which must be filled out prior to the convention.

The keynote speaker at the event is Rev. Edward Pinkney, of Benton Harbor, who was wrongly convicted of election laws and exonerated by the Michigan Supreme Court just this week.

For other information about the Green Party of Michigan, visit:
http://www.MIGreenParty.org/