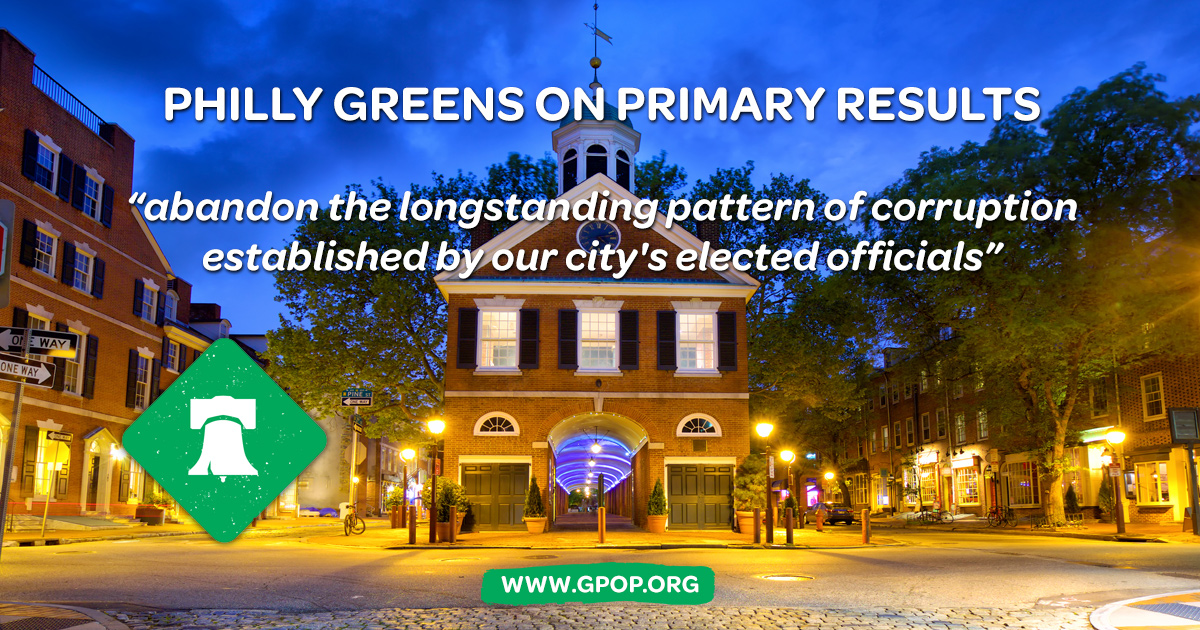 With preliminary results of the 2017 Primary Election now in, and given the Democratic Party's stranglehold on our city's politics, it is clear that Larry Krasner will be Philadelphia's next District Attorney. It is the Green Party of Philadelphia's hope that Krasner will abandon the longstanding pattern of corruption established by our city's elected officials, as most recently exemplified by our present District Attorney, Seth Williams.

The Green Party of Philadelphia (GPOP) calls upon Krasner, if elected District Attorney, to bring an end to a criminal justice system that criminalizes poverty and race while letting white-collar corporate crimes go unpunished. The Green Party recognizes that Krasner's platform includes many reforms which are in line with our party's key values, and we hope that he honors these pledges in office, specifically:

In a city that is 43% African American, the Green Party calls for a District Attorney who reflects the truth that "Black lives matter" not only in his rhetoric, but also in his actions.

In a city where (according to the ACLU of Pennsylvania) 25% of pedestrian stops by police are made without reasonable suspicion and 80% of those pedestrians are people of color, the Green Party calls for a District Attorney who will push for an end to stop-and-frisk and who will refuse to bring cases resulting from these illegal, racist practices.

Only a few weeks after Philadelphia police arrested 22 people in Frankford for marijuana, the Green Party calls for an end to the failed War on Drugs and for the legalization of drug possession.

Only days after Philadelphians raised nearly $58,000 for the "Mama's Bail Out Day" campaign, the Green Party calls for the elimination of a cash bail system that is designed to keep low-income people behind bars.

Finally, the Green Party calls for a District Attorney who will never pursue the death penalty – a barbaric practice that brings neither closure nor healing, but only more pain and victims.

In addition to restoring the idea of "justice" to our criminal justice system, Philadelphia's next District Attorney must guarantee voters' right to fair elections. We witnessed an astonishing attack of this right in March's special election in PA House District 197, which was rampant with election fraud and voter intimidation.The Green Party demands that the next District Attorney continues the investigation into the special election and takes concrete steps to ensure election integrity.

Finally, we must highlight the urgent need for electoral reform as demonstrated by this election.

Krasner won the primary with 38% of the vote, representing only 6% of the city's registered voters. A system where a candidate can win office, despite only a minority of voters casting their ballots for him, is an insult to democracy. Therefore, the Green Party calls for Instant Runoff Voting (IRV), where voters rank candidates in their order of preference and a candidate only wins if they obtain majority support.

We must also acknowledge the legalized bribery that is our campaign finance system. Total spending in this election is expected to double what was spent in Philadelphia's last competitive primary for District Attorney. Indeed, Krasner's campaign was supported both by grassroots efforts and by a super PAC funded by George Soros; we hope that his actions as District Attorney will be influenced by the people of Philadelphia and not by an outside billionaire. Therefore, the Green Party calls for the full public financing of elections and for stricter limits on campaign spending and contributions.

The Green Party is an independent political party founded on the four pillars of grassroots democracy, nonviolence, ecological wisdom, and social justice. For information about the Green Party of Philadelphia, please call 215-843-4256 or email [email protected]. Follow us on Twitter at @GreenPartyofPHL and on Facebook at www.facebook.com/GreenPartyOfPhiladelphia.