This Mother's Day: Skip the Flowers and Volunteer Some Time to Oppose War! 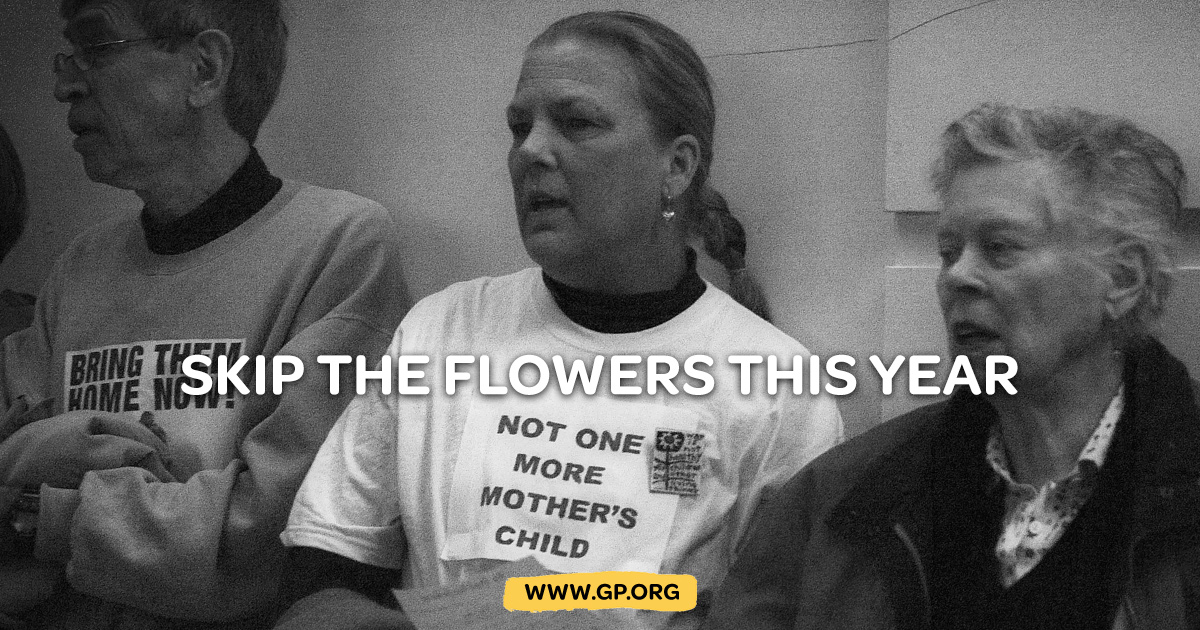 It's great to have a day dedicated to honoring and appreciating motherhood. But instead of buying a card and flowers, how about doing something more meaningful — like honoring motherhood by volunteering some time for the peace movement?

Hey, flowers are great — in nature. But it is not really honoring motherhood, and certainly not Mother Earth, to support the commercial practice of growing tons of pesticide-laden flowers in Ecuador and Colombia, then consuming tons of fossil fuels to ship them to U.S. consumers — so that they can look and smell pretty for two or three days before being thrown in the trash. And unless labor conditions have improved in the last few years, the ephemeral joy that your mother might experience from a bouquet comes with a bitter irony. More than likely, the true costs include the suffering and pesticide contamination of mothers in Colombia or children in Ecuador.

Granted, there are fair-trade options available, and kudos to outfits like One World Flowers for providing them. But at a time when the global eco-system is in crisis from the reckless combustion of fossil fuels, it is frankly unconscionable and stupid to consume fossil fuels to ship masses of flowers to U.S. consumers so that they can buy 48 hours of transitory stimulation — especially when you and your Mom can just go outside and smell some blossoms or flowers in their natural state!

"Mother's Day began as a holiday that commemorated women's public activism, not as a celebration of a mother's devotion to her family.

"The story begins in 1858 when a community activist named Anna Reeves Jarvis organized Mothers' Works Days in West Virginia. Her immediate goal was to improve sanitation in Appalachian communities. During the Civil War, Jarvis pried women from their families to care for the wounded on both sides. Afterward she convened meetings to persuade men to lay aside their hostilities."

Julia Ward Howe, the prominent American abolitionist, feminist, poet, and author of "The Battle Hymn of the Republic," also helped care for the wounded on both sides during the Civil War, and the widows and orphans they left behind. The devastation she witnessed inspired her to call out for women to "rise up through the ashes and devastation," urging a Mother's Day dedicated to peace. Her advocacy continued as she saw war arise again in the world in the Franco-Prussian War, prompting her to write what became known as The Mother's Day Proclamation. In the Proclamation, she admonished mothers to:

"Say firmly: 'We will not have great questions decided by irrelevant agencies. Our husbands shall not come to us, reeking with carnage, for caresses and applause. Our sons shall not be taken from us to unlearn all that we have been able to teach them of charity, mercy and patience.'

"We women of one country will be too tender of those of another country to allow our sons to be trained to injure theirs. From the bosom of the devastated earth a voice goes up with our own. It says 'Disarm, Disarm! The sword of murder is not the balance of justice.'"

Howe also called for a "general congress of women, without limit of nationality . . . to promote the alliance of the different nationalities, the amicable settlement of international questions, the great and general interests of peace." She translated her Proclamation into several languages and distributed it widely, then went to London in 1872 to promote an international Woman's Peace Congress. She initiated a "Mothers' Peace Day" observance on the second Sunday in June and it was observed on that date for a number of years. Anna Jarvis supported Howe's efforts to observe Mother's Peace Day.

After Anna Jarvis died in 1905, her daughter, also named Anna Jarvis, wished to memorialize her mother's life and started campaigning for a national day to honor all mothers. This ultimately led to the current holiday, celebrated on the second Sunday in May. It was proclaimed as such by President Woodrow Wilson in 1914 — three years before he broke his promise to keep the United States out of World War I.

Jarvis later came to protest against the commercialism of the holiday, and those who "would undermine Mother's Day with their greed." By 1943, she had become so distraught over the commercialization of the holiday that she decided to get a petition together to rescind Mother's Day. She ended up in a sanitarium — with members of the card and florist industry actually paying the tab to keep her there.

Today, there is a great need to reclaim the original purpose and spirit of Mother's Day, as the world is steeped in unrelenting wars. Our own nation has been at constant war for over 16 straight years, although you wouldn't know it from listening to the corporate news media in this country. This is partly because it isn't really "news" any more (except when the media want to hype a new attack, such as the recent missile strike against Syria), partly because most of the U.S. acts of aggression are conducted by aerial warfare, with very few U.S. casualties, and they don't care that millions of people in other countries are being slaughtered or turned into refugees — but mainly because war serves the interests of most of America's ruling class, which includes the wealthy owners of the giant media conglomerates.

One woman who is trying to revive the original purpose and spirit of Mother's Day is Cindy Sheehan, who lost her own son, Casey, to that utterly criminal enterprise known as the Iraq War, in 2004. Sheehan is one of the leaders of a group of peace activists organizing a Women's March on the Pentagon, this October 20th and 21st. Volunteering some time and effort to build this march would be a much more appropriate way of celebrating Mother's Day than blowing some money on throwaway flowers and a throwaway commercial card.

I frequently see people periodically asking on social media, "where is the peace movement these days?" It's around — but like war itself, the corporate media ignore us, so it's hard to get attention. There are lots of efforts being made to protest against and otherwise organize against war. In addition to the Women's March, the Chicago Anti-War Coalition is planning a major protest on August 25th, to mark the 50th anniversary of the 1968 Democratic National Convention, when Mayor Richard Daley's police brutally attacked anti-war protestors in the streets while the pro-war leadership of the party was busy defeating a pro-peace insurgency in the convention itself.

Another coalition is attempting to halt, or protest against, President Trump's plan to hold a military parade in the nation's capital this November 11th. This coalition also seeks to reclaim the historical name of what is now called the Veterans' Day holiday: Armistice Day.

There are other organizations working to build a stronger peace movement in the U.S. The United National Antiwar Coalition recently conducted anti-war protests in over 40 cities around the country. The Green Party of the United States runs anti-war candidates for Congress and the Green Party Peace Action Committee provides resources and information for candidates. World Beyond War, the Black Alliance for Peace, and U.S. Labor Against the War are among some of the other great organizations trying to turn the tide against war and the U.S. War Machine.

Any social movement requires human energy to be successful. Instead of asking where the peace movement is these days, you should be asking yourself what you are doing to put an end to the senseless carnage and incalculable mass human suffering of war — now being carried out in your name, by your government.

Chances are, one or more of these organizations is active near you. The peace movement will be one person stronger if you get involved. This Mother's Day, how about giving the gift of peace — by making a promise to work for it?

Rich Whitney is an attorney, actor, disk jockey, environmental and peace activist, and former Green Party candidate for Illinois governor — among other things.