Greens vote: No county funds to Amazon to move its new offices HQ2 to Arlington 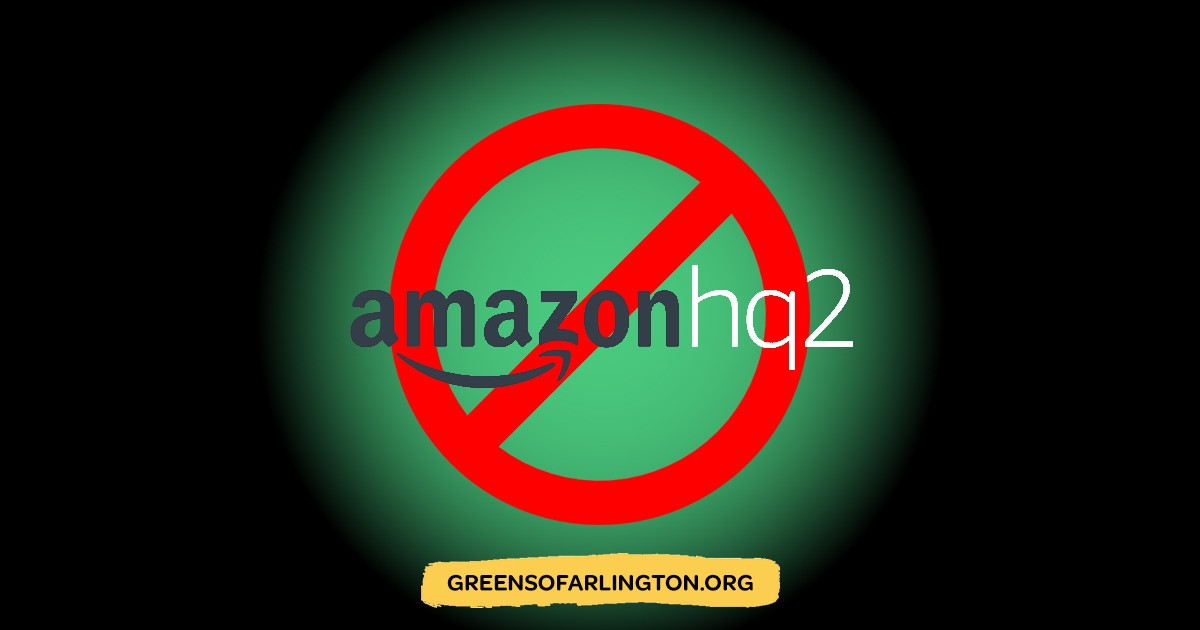 At their June 6 meeting, the Arlington Green Party voted to oppose any county funds for Amazon to move its new office to Arlington. Greens are concerned with the secretive and hidden negotiations between the County Government and Amazon to provide that company with potentially billions of public dollars in order to open a large office complex in Arlington or nearby Alexandria.

Greens are very concerned that these public funds will detract from funds now used to support our schools, libraries, public safety, affordable housing assistance, recreation, and the other public programs that make Arlington a great community already. It is bad for democracy to keep the people in the dark. 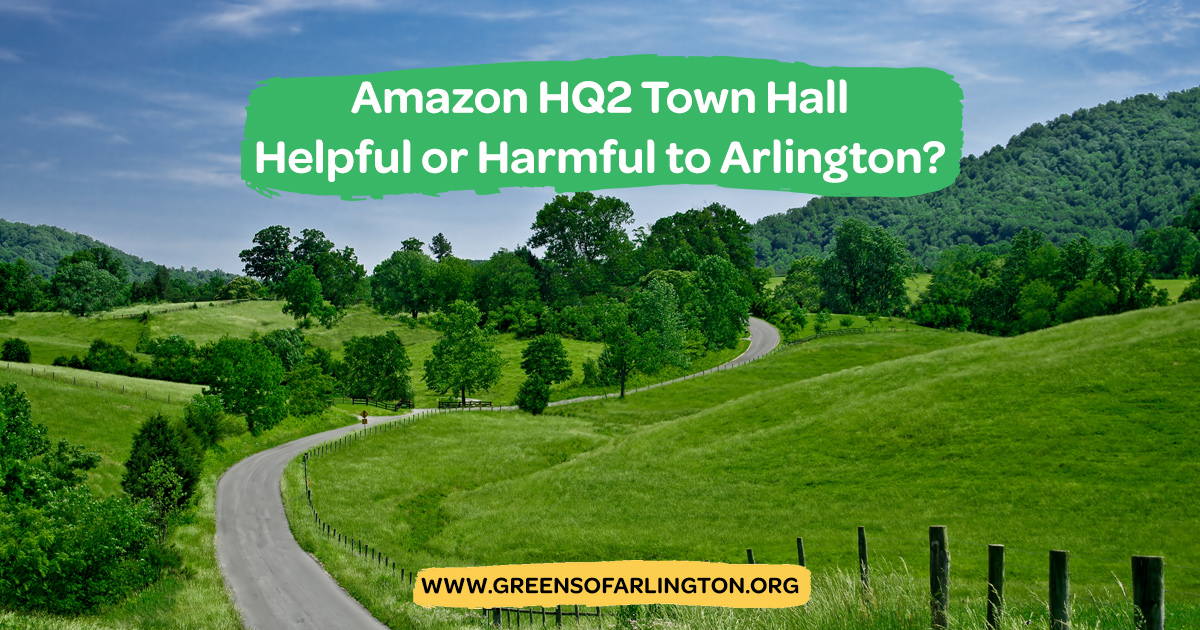 Hosted by Our Revolution Arlington, and co-sponsored by the Arlington Greens. 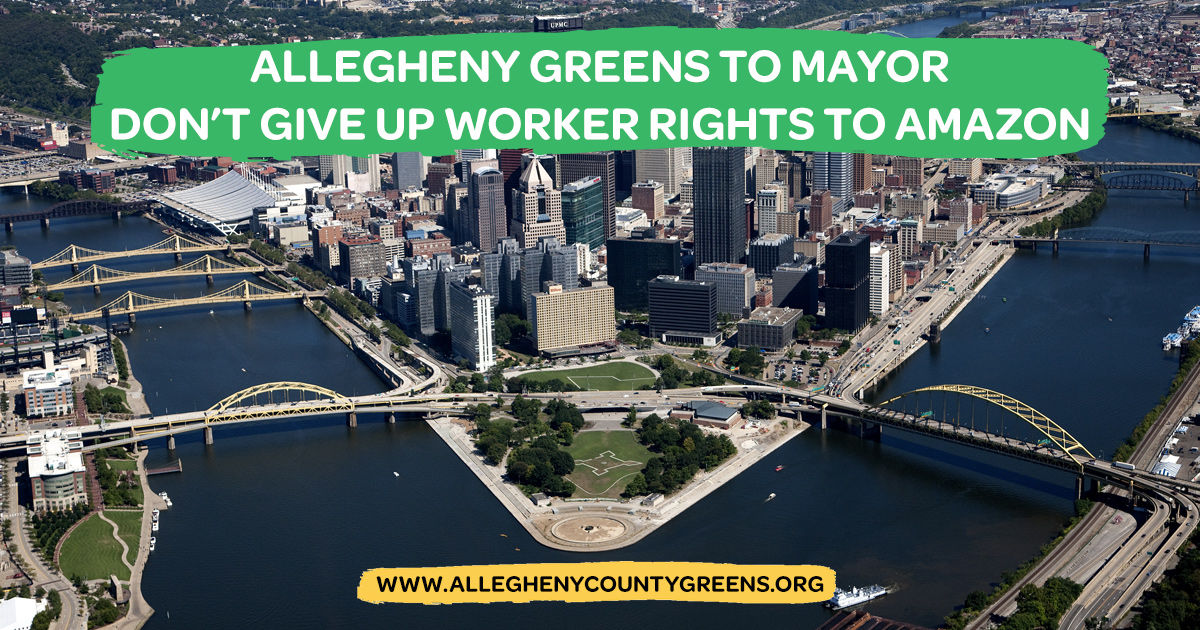 PITTSBURGH -- The Green Party of Allegheny County (GPOAC) understands that Pittsburgh Mayor Bill Peduto and Allegheny County Executive Rich Fitzgerald will submit a proposal tomorrow in attempt to convince Amazon to establish a second headquarters in the Pittsburgh area, as was recently reported in the Pittsburgh Post-Gazette. Tomorrow is the deadline for municipalities to submit their proposals in response to Amazon's RFP. Amazon will announce its decision where it will locate its second headquarters in 2018.

GPOAC is a political party with a mission based on four pillars: social justice, democracy, ecology and peace. We are grassroots activists using collective action to affect change at the local, regional, national and international level.

Green Party to Amazon: Stay Away from Philly 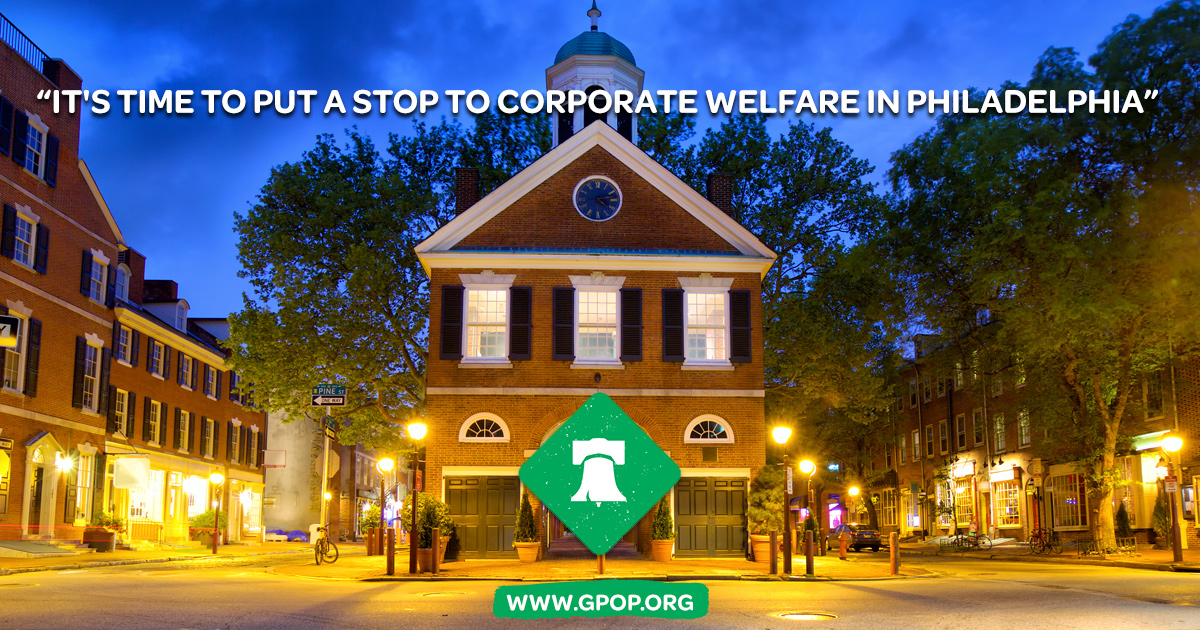 PHILADELPHIA, PA – On October 19, cities across the country will submit their proposals to become the home of Amazon's new $5 billion headquarters. The Green Party of Philadelphia (GPOP) City Committee condemns Mayor Jim Kenney's decision to enter Philadelphia into this competition while ignoring the harsh reality of the poor and working class citizens of Philadelphia. Far from improving our city, an Amazon headquarters would only exacerbate the crises we already face.

Amazon, which made $136 billion in revenue in 2016, is demanding tax breaks from the city it selects as its new home. Philadelphia cannot afford any more corporate welfare. The city has already given Comcast a ten-year property tax abatement in addition to tens of millions of dollars for Comcast's new Center City building. It seems Mayor Kenney, a willing participant in Amazon's bribery, can somehow put money on the table for Amazon but can't seem to do so for the people of Philadelphia.