The Green Party of Pennsylvania declares victory in the general election 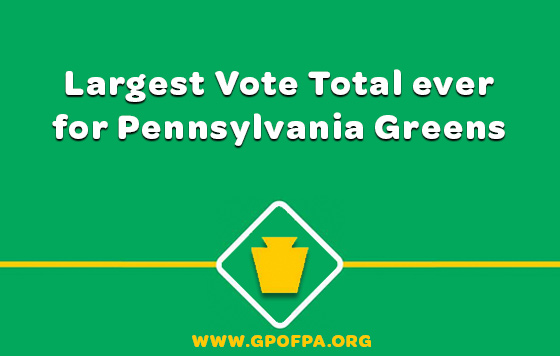 The Green Party of Pennsylvania's status is elevated from Political Body to Minor Party as a result of the General Election. Row Office candidates Kristin Combs, Treasurer and John J Sweeney, Auditor General, reached 3% of the vote total in their respective races.

"We entered this race with a very specific goal: win 2% to make sure we start 2017 in the best position possible," said State Treasurer candidate Kristin Combs. "Thanks to Pennsylvania voters, we not only met our goal; we nearly doubled it. I can't wait to get working on the next round of local elections."

"At least 165,000 people voted Green. That is the largest vote total the Green Party has ever achieved in Pennsylvania," said Auditor General candidate John J Sweeney. "I was shocked when I discovered it exceeds Ralph Nader's 2000 total by over 60,000. That is 60% more than Nader's 103,392 votes."