On 5th Anniversary of Hurricane Sandy, Green Party Calls for NYC to Commit to 100% Clean Renewable Energy by 2030 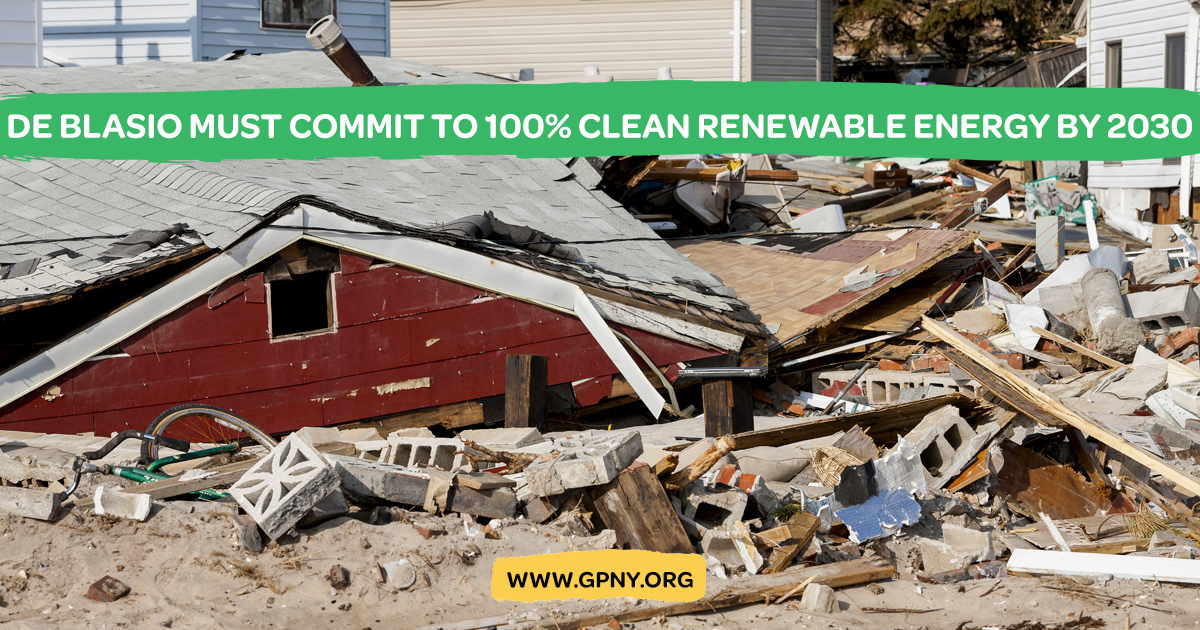 On the 5th anniversary of Hurricane Sandy, the Green Party is calling upon NYC to commit to 100% clean energy for all uses by 2030.

Despite being one of the three most vulnerable cities on the planet to sea level rise from climate change, the city under Mayor de Blasio still only calls for an 80% reduction in greenhouse gases by 2050. Recent studies now say that sea level rises of more than 6 feet are possible by the end of the century, and that NYC will experience 500-year floods (more than 7 feet) every five years or so by 2030.

As global warming fuels ever stronger hurricanes, it will be increasingly difficult for communities to recover from such extreme weather. The vast majority of Puerto Rico still is without power more than a month after being hit by a category 5 hurricane.

"Under de Blasio, the city has dawdled in taking action to reduce global warming and improve resiliency while many residents are still struggling to recover 5 years after Sandy. Sandy caused more than $65 billion in damage; we shouldn't have to wait until another Sandy hits before we take action. De Blasio is even less committed to environmental action that his Republican predecessor," noted Akeem Browder, the Green Mayoral candidate. The Greens also cited the numerous problems and delays with the City's Build it Back program.

The Green candidates for Mayor (Akeem Browder), Comptroller (Julia Willebrand), and Public Advocate (James Lane) all called for the city to divest billions of dollars in the pension funds that is invested in fossil fuels. All three offices have votes on at least some of the city's 5 public pension funds. Instead, the city has dragged out a study on the carbon footprint of the pension funds for almost 2 years as a way to evade taking a formal vote on divesting.

"Scott Stringer has been actively hostile to the need to divest our city pension funds from the fossil fuel companies that are driving catastrophic climate change. While the State Attorney General investigates Exxon for lying to investors and the public about climate change, Stringer spends him time pushing shareholder resolutions calling upon Exxon to study the issue. Failing to divest from fossil fuels is a bad financial decision that puts our pensions at risk," said Julia Willebrand, the Green candidate for City Comptroller.

Worldwide, more than $5 trillion worth of investments are now pledged to be divested from fossil fuels by more than 700 institutions including a number of municipalities and universities in NYS. The NYC pension plans are among the three largest in the country, with more than $3 billion invested in fossil fuels.

"We need New York City to be a world leader on both climate action and climate justice," said James Lane, the Green candidate for Public Advocate. "As we saw with Hurricanes Sandy and Katrina and as we are seeing during this hurricane season, it is always the poor and communities of color that are most harmed by climate disruption. With Greens in office, it would be the People making the decisions, not Wall Street and the real estate and fossil fuel industries," he added.

The Greens support public ownership and community control of the energy system. As an interim step, it supports the city starting a Community Choice Aggregation program like Westchester that would enable local residents rather than Con Ed to determine where it gets it energy from, promoting renewable energy while lowering costs.

The Greens said if elected they would take legal and legislative action to require the Cuomo administration and the utility companies to provide upfront financing to enable hundreds of thousands of consumers to do cost-effective energy upgrades as required under the Green Jobs Green NY state law. The Greens faulted the de Blasio administration for failing to take steps to accelerate the development of off shore wind off of the City and Long Island which would meet the city's energy needs at a lower cost than continued reliance upon fossil fuels. It would also immediately solarize (including geothermal, energy efficiency, etc.) all public buildings and would require all vehicles to be emission free within the next 10 to 15 years.

De Blasio has resisted efforts to accelerate the city's transition to 100% clean energy. The City's goal of reducing greenhouse gas emissions by 80 percent by 2050 was the standard under the Kyoto Protocol decades ago. At the recent Paris summit on climate change, more than 100 developing countries stood up against the industrial polluting nations like the United States and successfully argued to lower the targeted cap for global warming from 2 degrees centigrade to 1.5 degrees. The lower goal requires doubling the pace for reducing greenhouse gas emissions to at least 6% a year.

De Blasio has instead pushed the old climate goal of 80 by 50. He has refused to adopt a Climate Action Plan with clear action steps, timelines and benchmarks for achieving even the city's lower goals. After Trump said he would remove the U.S. from the Paris accords, the U.S. Conference of Mayors called upon cities to adopt their own climate goal of 100% clean renewable energy by 2035.

The Greens said that it agreed with the Climate Works for All coalition that it was time for the City to require mandatory energy retrofits for buildings, which account for three-quarters of the city's carbon footprint. De Blasio instead has continued to tinker with the unsuccessful effort by Bloomberg started a decade ago to promote voluntary retrofits for large buildings.

The Green Party recently called for an immediate $40 billion state investment in mass transit statewide to reduce the carbon footprint from transportation, which accounts for more than a third of the state's carbon footprint. The MTA's Capitol Plan calls for $105 billion over 20 years for capital improvements - though transit advocates estimate the system could use an additional $12 billion annually. The Party has described the MTA's annual payments for its $35 billion debt as an ATM machine for Wall Street.

The Green Party supports using the existing Stock Transfer Tax to provide funds for mass transit and climate action rather than rebating $15 billion plus annually to Wall Street speculators. When first initiated over a century, the proceeds from the tax went to the city. Then several decades ago, the state transferred the revenue to itself, and then a few years later began to rebate the tax.

The Party also supports a wealth tax and congestion pricing, the dueling proposals from the Mayor and Governor. Both the state and federal government need to significantly increase its funding for mass transit. The Party supports a state carbon tax to require polluters to pay for the damage they cause by burning fossil fuels; part of the proceeds would go to mass transit.

"The devastation we have seen in the last month not only from massive hurricanes but from record heat waves and wildfires should be a wake-up call for elected officials. We need a similar mobilization to what we did after Pearl Harbor. We need to say no to all fossil fuels and yes to wind, solar, geothermal and energy efficiency. We need to promote a Just Transition that addresses workers and vulnerable communities, and ensures that low-income New Yorkers can participate in our energy future," said Gloria Mattera, state party Co-Chair.