The Green Party stands for ... 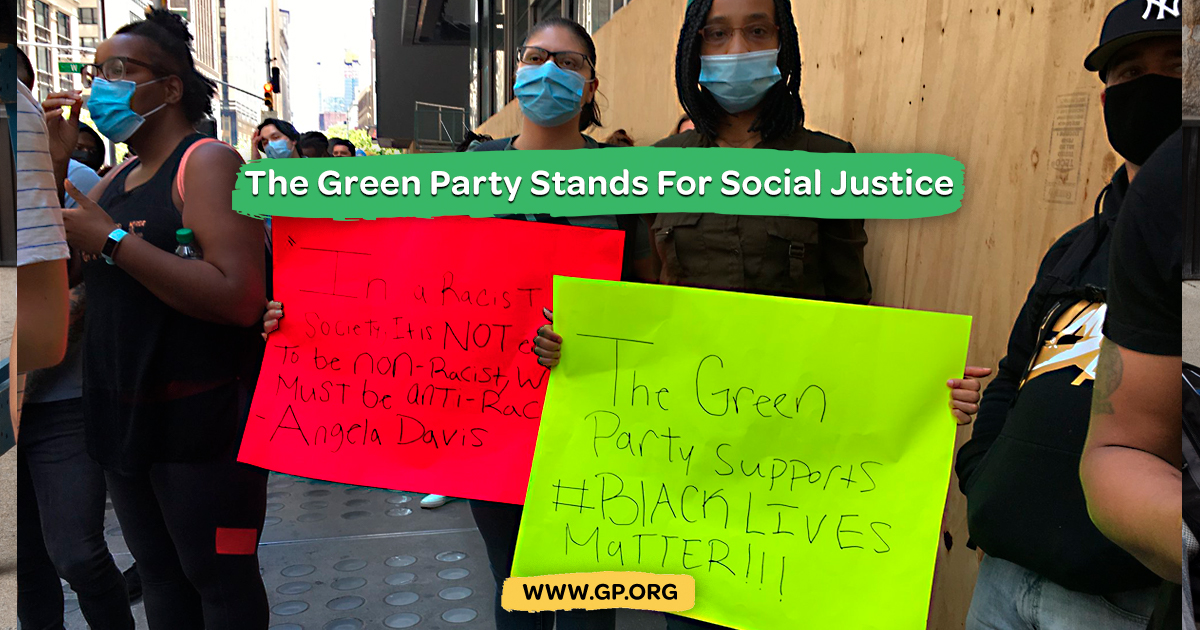 The content below feature excerpts from our platform along with articles from gp.org that illustrate our commitment to various social issues.
Please note that each headline directs viewers to additional content. 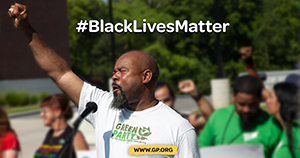 THE GREEN PARTY STANDS WITH #BlackLivesMatters

The development of the United States has been marked by conflict over questions of race. Our nation was formed only after Native Americans were displaced. The institution of slavery had as its underpinnings the belief in white supremacy, which we as Greens condemn. In slavery's aftermath, people of color have borne the brunt of violence and discrimination. The Green Party unequivocally condemns these evils, which continue to be a social problem of paramount significance.

Read more about our Black Caucus

THE GREEN PARTY STANDS IN SUPPORT FOR CLEAN WATER 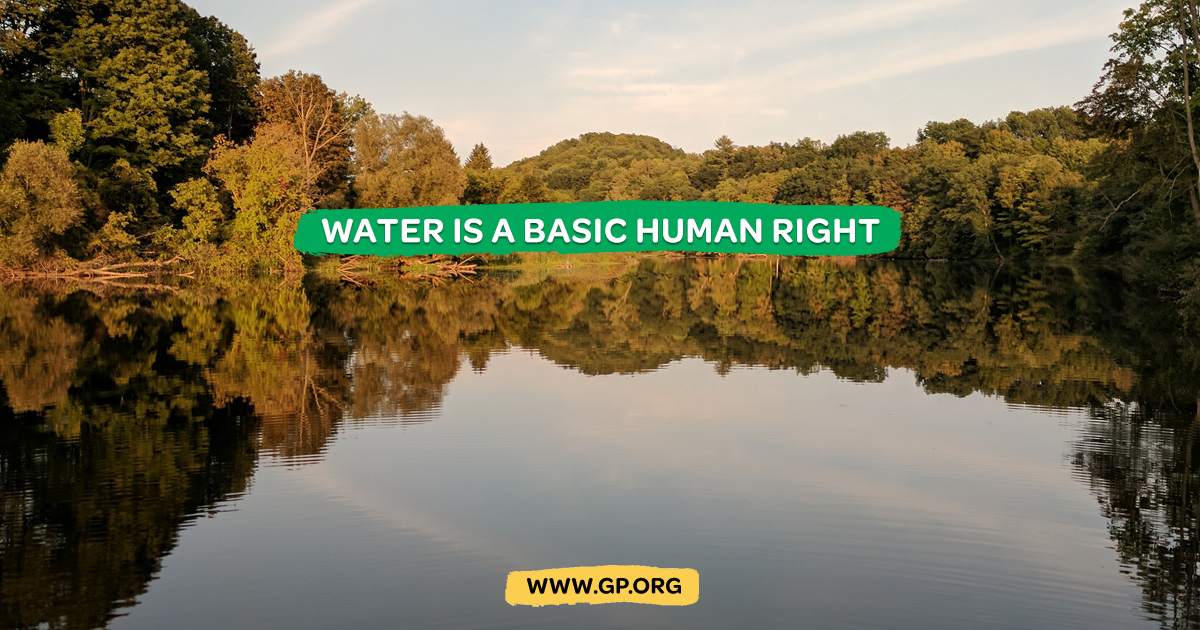 Read about our Eco-Action Committee 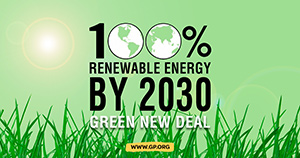 THE GREEN PARTY STANDS IN SUPPORT FOR THE GREEN NEW DEAL

THE GREEN PARTY STANDS IN SUPPORT OF LEGAL STATUS FOR IMMIGRANTS

We stand firmly for social justice for all those living in this country regardless of their immigration status. Above all, policy and law must be humane. Anything less would be inconsistent with our Green Values, and with our nation's values.

Read about our Latinx Caucus

THE GREEN PARTY STANDS IN SUPPORT OF MEDICARE FOR ALL

We support single-payer universal health care and preventive care for all. We believe that health care is a right, not a privilege. Our current health care system lets tens of thousands of people die each year by excluding them from adequate care, while its exorbitant costs are crippling our economy. 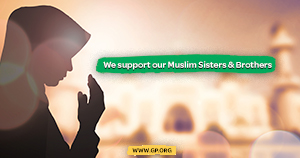 THE GREEN PARTY STANDS IN SUPPORT OF OUR MUSLIM SISTERS & BROTHERS 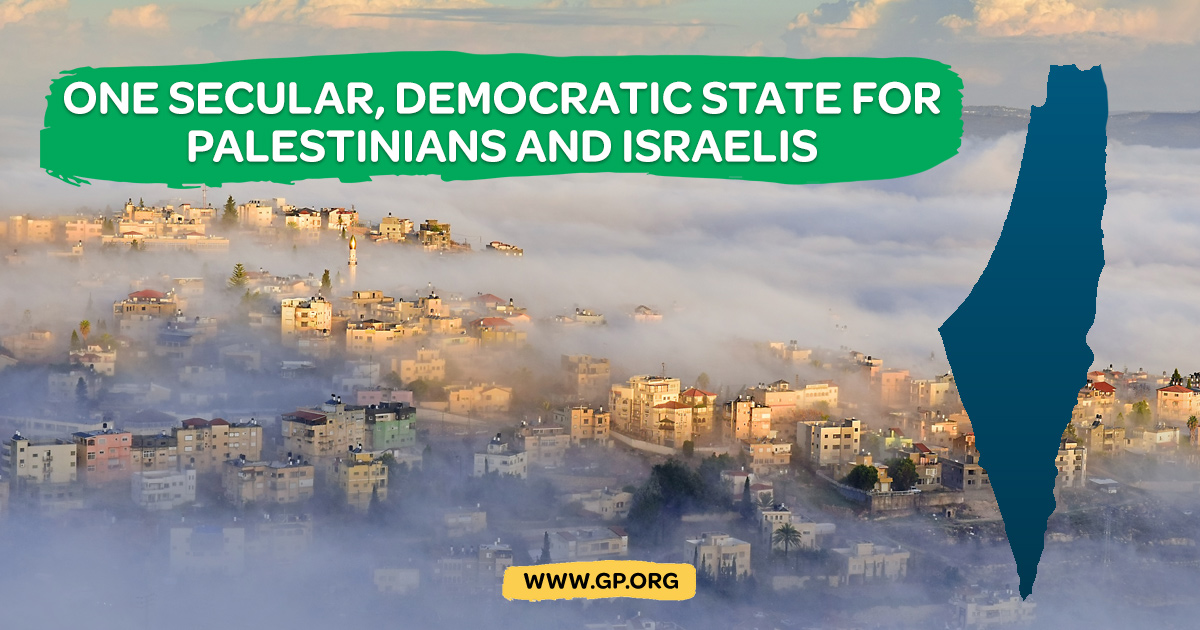 THE GREEN PARTY STANDS IN SUPPORT OF ONE SECULAR, DEMOCRATIC STATE FOR PALESTINIANS AND ISRAELIS

Read about our Peace Action Committee 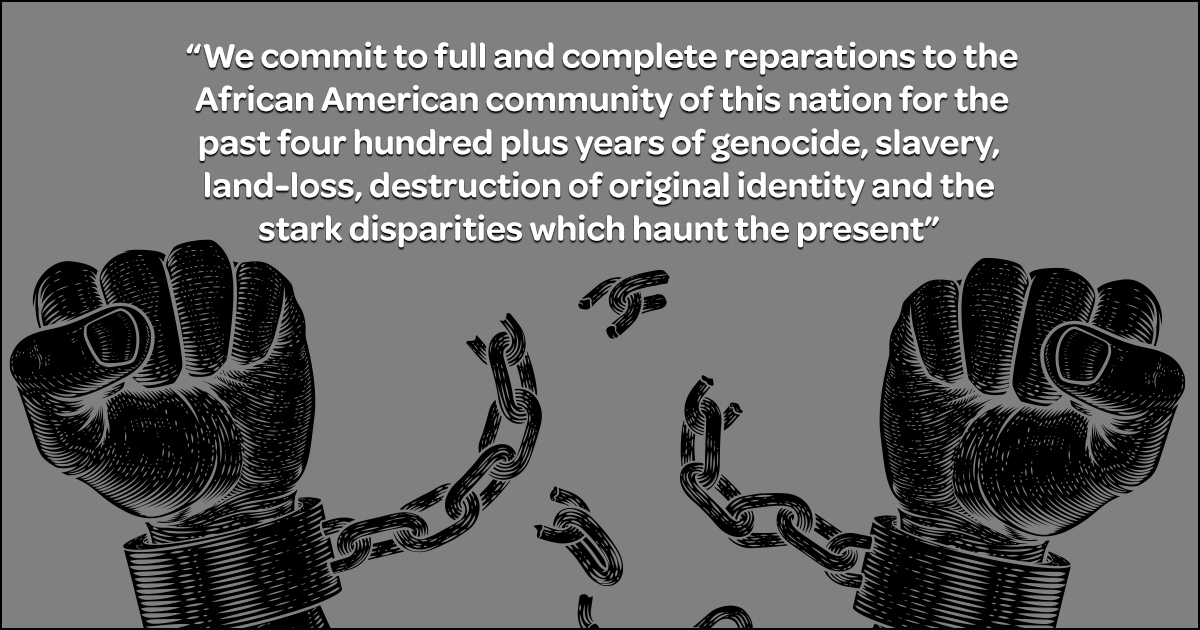 THE GREEN PARTY STANDS IN SUPPORT OF REPARATIONS

The development of the United States has been marked by conflict over questions of race. Our nation was formed only after Native Americans were displaced. The institution of slavery had as its underpinnings the belief in white supremacy, which we as Greens condemn. In slavery's aftermath, people of color have borne the brunt of violence and discrimination. The Green Party unequivocally condemns these evils, which continue to be a social problem of paramount significance.

Read about our Reparations Working Group 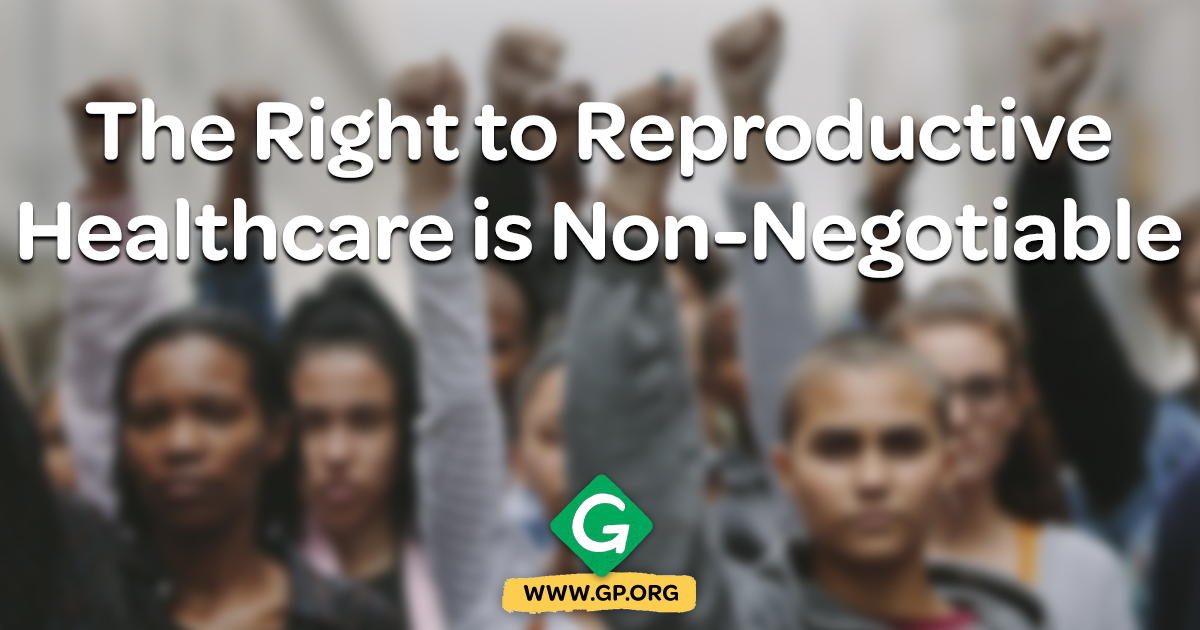 Roe v. Wade was a settled Constitutional legal interpretation. It was a step forward for women's basic human rights. Then we all figure that we have this basic building block to work from. We were thinking of fair wages, equal opportunity for jobs, and education.

The Green Party’s national platform calls choosing whether to have a child “intensely personal” and asserts the right to safe and legal access to abortion as “non-negotiable.” Greens call for a wide array of universally affordable and easily available contraceptive options for women and men. 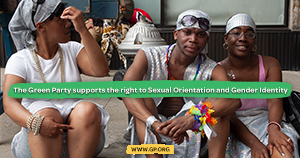 Read about our Lavender Caucus

THE GREEN PARTY STANDS IN SUPPORT OF PUERTO RICAN SELF DETERMINATION

Therefore we stand for the right of the people of Puerto Rico to self-determination and independence in conformity with United Nations Resolution 1514(XV) of 1960.

Read about our International Committee 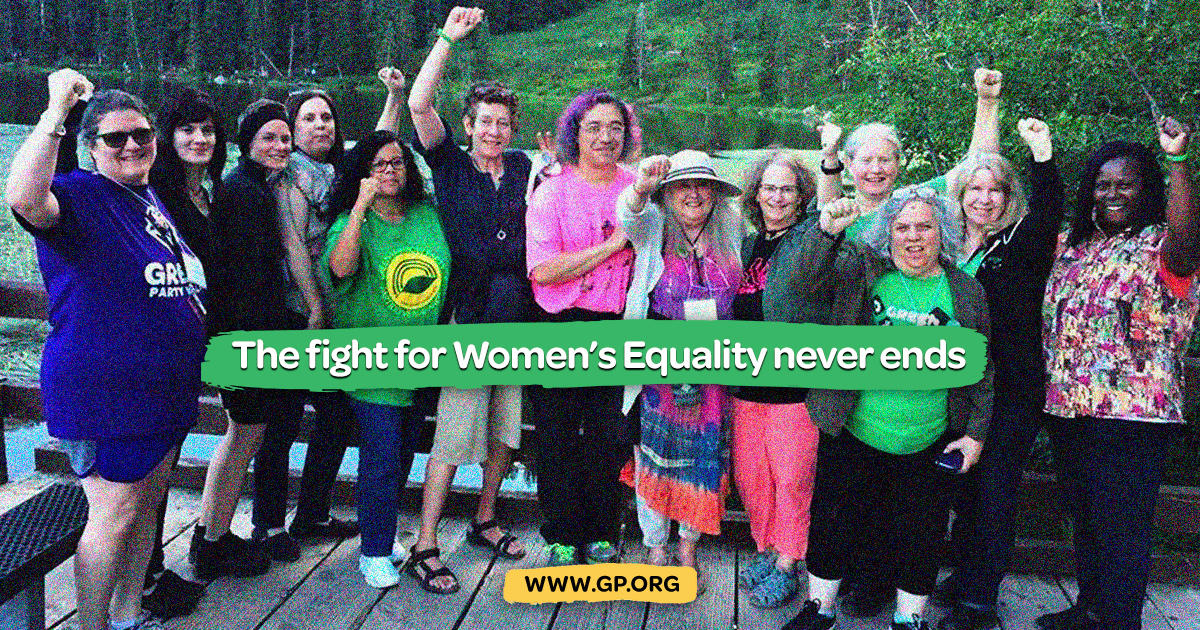 THE GREEN PARTY STANDS IN SUPPORT FOR WOMEN'S EQUALITY

Since the beginning of what we call civilization, when men's dominance over women was firmly established, until the present day, our history has been marred with oppression of and brutality to women. The Green Party deplores this system of male domination, known as patriarchy, in all its forms, both subtle and overt — from oppression, inequality, and discrimination to all forms of violence against women and girls including rape, trafficking, forced sex which is also rape, slavery, prostitution and violence against women within marriage and relationships and in all institutions. The change the world is crying for cannot occur unless women's voices are heard. Democracy cannot work without equality for women, which provides equal participation and representation. It took an extraordinary and on-going fight over 72 years for women to win the right to vote. However, the Equal Rights Amendment, first introduced in 1923, has still not been ratified by 2012, representing a continuous struggle of 87 years with no victory in sight.

We believe that equality should be a given, and that all Greens must work toward that end. We are committed to in- creasing participation of women in politics, government and leadership so they can change laws, make decisions, and create policy solutions that affect and will improve women's lives, and we are building our party so that Greens can be elected to office to do this. In July 2002 the National Women's Caucus of the Green Party of the United States was founded to carry out the Party's commitment to women.

Read about the National Women's Caucus 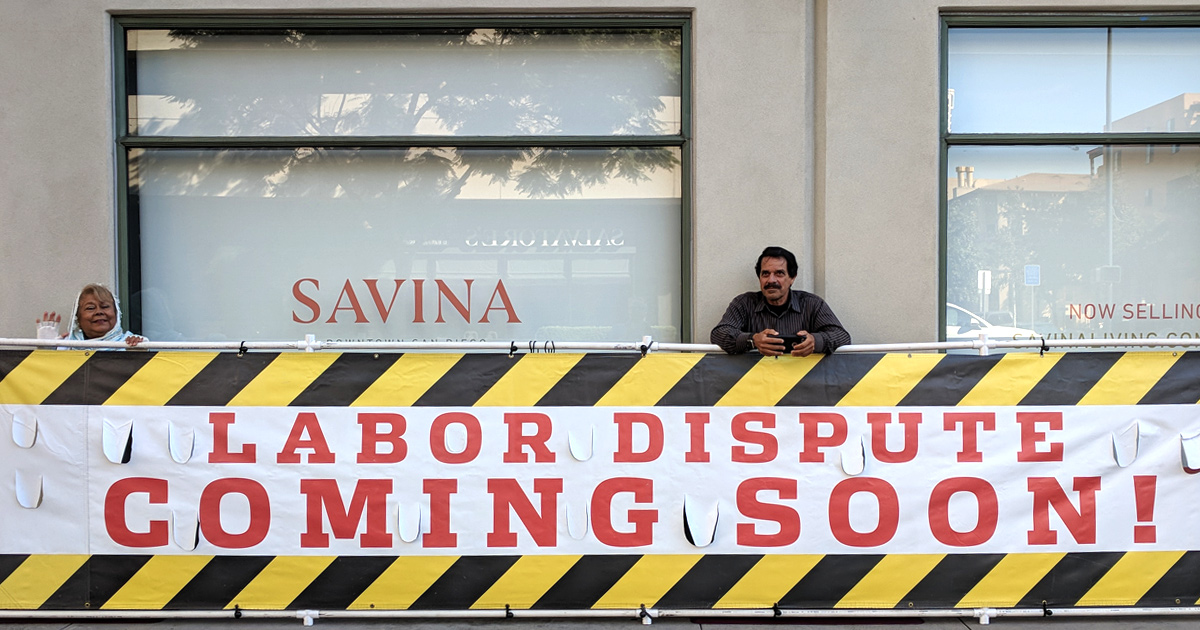 THE GREEN PARTY STANDS IN SUPPORT OF WORKING PEOPLE 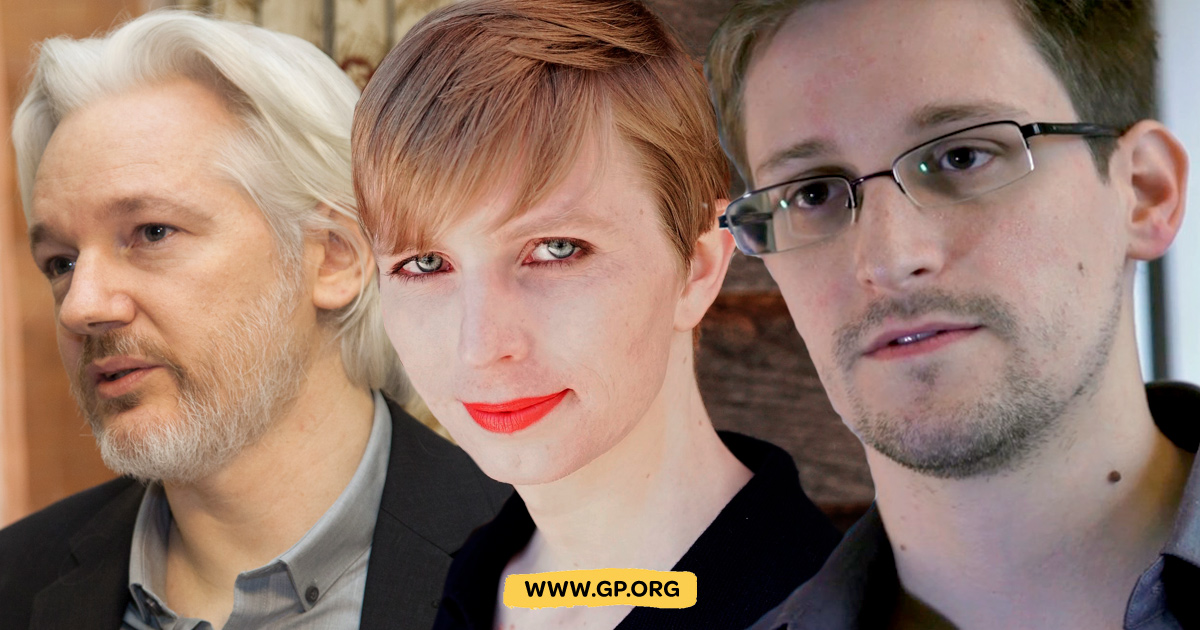 THE GREEN PARTY STANDS IN SUPPORT OF WHISTLEBLOWERS

Independent, critical media are essential to an informed and healthy democracy.

Citizens must have ready access to news and information to make responsible informed choices as voters and to carry out their other duties of citizenship.

The United States' original communications policy was the 1st Amendment. Freedom of the press was guaranteed in the Constitution because an exchange of ideas and an unfettered debate were considered essential components of a democratic society. Today, however, government policy is designed less to enhance public deliberation than to boost the profitability of media corporations.

Our media laws and rules promote the formation of huge media conglomerates while discouraging competing voices. As a result, the mainstream media is increasingly cozy with the economic and political elites whom they should be investigating. Mergers in the news industry have accelerated, further limiting the spectrum of viewpoints in the mass media. With U.S. media overwhelmingly owned by for-profit conglomerates and supported by corporate advertisers, investigative journalism is in an alarming decline.

Read more about our stance on free speech