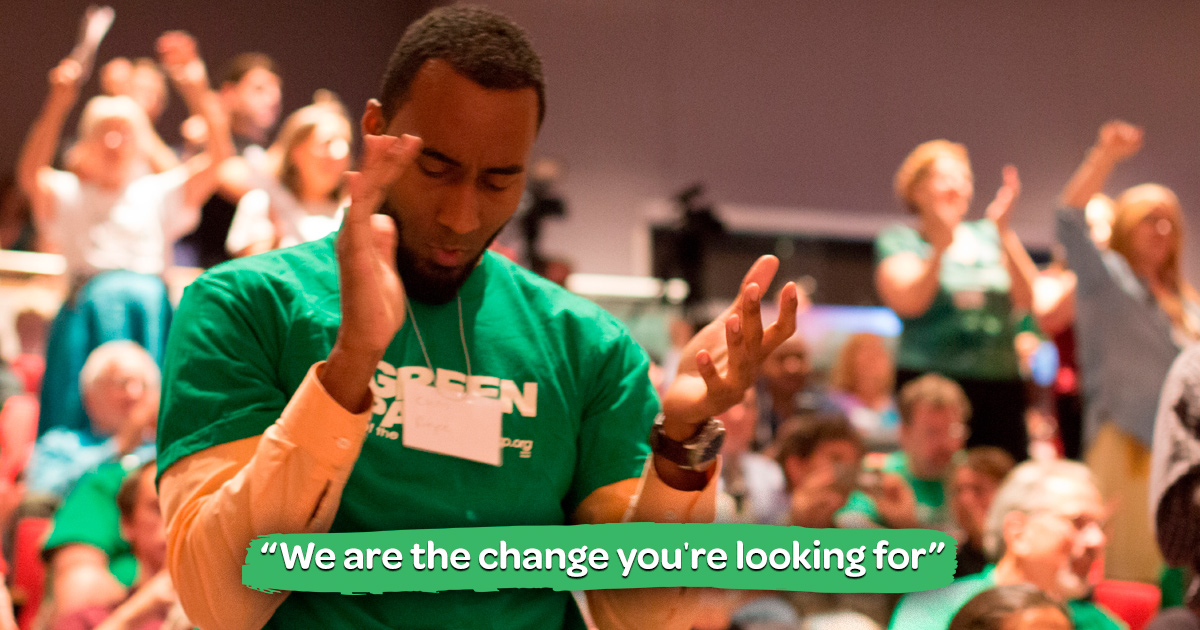 Welcome to the Green Party of the United States (GPUS), an independent political party that is connected to American social movements, and is part of a global Green movement that shares key values, including our Four Pillars: Peace and Non-Violence, Ecological Wisdom, Grassroots Democracy, and Social Justice, and our Ten Key Values.

We are a federation of state parties. We have a presence in most states. Find your state party here.

Currently we have more than 100 elected officials around the country, mostly at the municipal level, working to enact Green policies. We run many candidates who put Green issues on the table in elections at every level.

We don’t take corporate money. We are working to build clean government that works for all of us – not just the 1%. We are fighting for the future.

Learn more about why a third party is necessary, how we need to fix our political system, and the issues we're fighting for.

Don't forget to sign up and join the fight.

How To Plug In

Be sure to check out your state party.

Please let our web manager know if you find a broken link.

While we have Green groups in many areas, we recognize that you may live a long way from an active group. If you're interested in taking direct action or starting new campaigns,we've developed these Facebook groups to help like-minded people find one another and start organizing.

You are our on-the-ground organizers. It is our hope that the plans you devise with one another here become the activities you bring to life In your local community.

Perhaps you want to pick a day of action, where the people in your Issue Group all table at the same time in towns and cities across the US. Maybe you’d like to organize letter to the editor campaigns and create templates to share within the group. Or maybe you’ve had a plan burning in the back of your mind but need some help getting it off the ground.

That’s what these Issue Groups are for: helping each other develop plans to take action, engage the community, and demand change in the areas that most interest you. These aren’t discussion groups. Everyone there already knows why the issue is important. It’s the next step, the what and the how, that we want you to decide.

GPUS does not have an individual membership structure, though we encourage people to become Sustaining Donors and commit to supporting the party in that way.

The Green Party starts at the grassroots level, with local groups, who might represent a neighborhood, town, or county.

People may become members of their state Green Parties, through whatever process each state party may have. As of 2014, 30 states plus the District of Columbia have partisan party voter registration; the other states do not. Where a state has partisan registration and voters can register Green, such registered voters may be considered party members.

The Green Party is an “established” party in some states, but not others; rules governing third party access to the ballot vary widely from state to state.

Each state party that is affiliated with GPUS sends representatives to the GPUS National Committee (NC), which is the highest decision-making body in GPUS. There are 150 seats on the NC. State parties are represented proportionally in the NC, based on a formula that measures each party’s relative size and strength. Affiliated caucuses also have representation on the NC.

The GPUS Steering Committee (SC), along with the party’s staff, oversees and helps execute the day-to-day administration and operations of the party. The SC is made up of seven members plus the party’s Treasurer and Secretary, for a total of nine members. Steering Committee members must be National Committee delegates, alternate delegates, or former delegates/alternates from their state parties. They are elected by the National Committee for two-year terms, with a two-term limit.

This section is under construction.

Greens Around The World

With members in over 90 countries, the Greens are the world's fastest growing political family. We work for change inside and outside the world's parliaments and have elected representatives in all corners of the world at local, state and national level, and in the European Parliament. The Global Greens are organized into four federations, in the Americas, Africa, Europe and Asia-Pacific.

The Global Greens was founded at the first Global Greens Congress, held in Canberra, Australia in April 2001. This was the culmination of a 30-year journey from the beginning of the world's first Green parties in 1972. These were in the Australian state of Tasmania (the United Tasmania Group) and in New Zealand (the Values Party). Others followed quickly: in 1973 PEOPLE (later the Ecology Party) was set up in the UK and in other European countries Green and radical parties sprang up in the following years.

By 1992 there were enough Green parties to hold the first Planetary Meeting of Greens, in conjunction with the Rio Earth Summit in Brazil. In 1999, the Milenio Verde conference in Oaxaca, Mexico, was attended by 150 Greens from 24 countries.

The next Congress is scheduled for Europe in late 2016 or early 2017; the location is still to be determined.

Hundreds of MPs elected to national parliaments.
90 Green Parties from around the world.
Four Regional Federations, plus a growing network of Global Young Greens (GYG) [Link]

On May 2, 2011, Green Party leader Elizabeth May became the first elected Green Party MP to sit in the House of Commons.

The Green Party of Canada was founded in 1983, and had grown to 10,000–12,000 registered members as of October 2008. The Green Party of Canada advances a broad multi-issue political platform that reflects its core Green values of ecological wisdom, social justice, grassroots democracy and non-violence. It has been led by Elizabeth May since August 26, 2006.
The party broke 1% of the popular vote in the 2004 federal election, when it received 4.3% and qualified for federal funding. Its support has ranged between 3.1% and 14% since the 2006 federal election. In the 2008 federal election, the Green Party of Canada was invited to the debates for the first time and achieved a high mark of 6.8% of the popular vote. With just under a million votes, it was the only federally funded party to receive more votes than in 2006.


Green Party of England and Wales

The Green Party of England and Wales is the largest Green party in the United Kingdom and contains various regional divisions, including the semi-autonomous Wales Green Party. The party has one Member of Parliament in the House of Commons, Caroline Lucas, who represents the constituency of Brighton Pavilion. Lucas was the party's first leader, serving from 2008 until 2012, when she was succeeded by Natalie Bennett. The Green Party also has one life peer, three Members of the European Parliament, two members of the London Assembly, and a small number of councillors on various local councils in England and Wales.

The Green Party of England and Wales was created in 1990 when the former Green Party split into separate parties: Scottish Green Party, Green Party in Northern Ireland, and England and Wales. The party is affiliated to the Global Greens and the European Green Party. It has often been viewed as a "single issue" environmentalist party, but while it still maintains its environmental policies and political ecology, it also has a history of support for communitarian economic policies, including well-funded, locally controlled public services within the confines of a steady state economy, and it supports proportional representation. It also takes a progressive approach to social policies such as animal rights, LGBTIQ rights and drug policy reform, and believes strongly in nonviolence, basic material security, and democratic participation.

The Greens became part of the Irish government for the first time following the Irish general election, 2007, having agreed upon a programme for government in coalition with Fianna Fáil and the Progressive Democrats.

The Green Party of Ireland operates in both the Republic of Ireland and Northern Ireland. It was founded as the Ecology Party of Ireland in 1981 by Dublin teacher Christopher Fettes. The party became the Green Alliance in 1983 and in 1987 was renamed to its current title in English. Its leader is Eamon Ryan, its deputy leader is Catherine Martin and its chairman is Roderic O'Gorman.

The Scottish Green Party has two MSPs in the Scottish Parliament and fourteen councillors in 5 of the 32 Scottish local councils.

The Scottish Green Party was created in 1990 when the former Green Party split into separate parties for Scotland, Northern Ireland, and England and Wales. The party is affiliated to the Global Greens and the European Green Party. While associated mainly with environmentalist policies, it has a history of support for communitarian economic policies, including well-funded, locally controlled public services within the confines of a steady-state economy, is supportive of proportional representation and takes a progressive approach to social policies. It is the only party other than the Scottish National Party to both support Scottish independence and have representation in Scottish Parliament.

Federally, the Greens have ten senators and one member in the lower house, 23 elected representatives in state and territory parliaments, more than 100 local councillors and close to 10,000 party members.

At the 2010 federal election the Greens received a four percent swing to finish with 13 percent of the vote in the Senate, a first for any Australian minor party. The Senate vote throughout the states was between 10 and 20 percent. The Greens won a seat in each of the six states at the election, again a first for any Australian minor party, which brought the party to a total of nine senators from July 2011 and gave the Greens the sole balance of power in the Senate. The Greens also won their first House of Representatives seat at a general election, the seat of Melbourne with candidate Adam Bandt. The Greens support a minority Labor government in the A.C.T. Legislative Assembly.
The Australian Greens, are commonly known as The Greens. The party was formed in 1992 and is today a confederation of eight state and territory parties. Other than environmentalism the party cites four core Green values: ecological sustainability, social justice, grassroots democracy and peace and non-violence.

Party constituencies can be traced to various origins – notably the early environmental movement in Australia and the formation of the United Tasmania Group (UTG), one of the first Green Parties in the world, but also the nuclear disarmament movement in Western Australia and sections of the industrial left in New South Wales. Co-ordination between environmentalist groups occurred in the 1980s with various significant protests. Key people involved in these campaigns included the party's former leader Bob Brown and former leader Christine Milne who went on to contest and win seats in the Tasmanian Parliament and eventually form the Tasmanian Greens.

The Green Party of Aotearoa New Zealand is the third largest political party in the New Zealand parliament with 14 seats. It focuses firstly on environmentalism, arguing that all other aspects of humanity will cease to be of concern if there is no environment to sustain it. Ecological economics, social justice, participatory democracy, and non-violence make up the balance of its platform. The party has both a male and female co-leader. The party is currently co-led by MP Metiria Turei and Russel Norman.