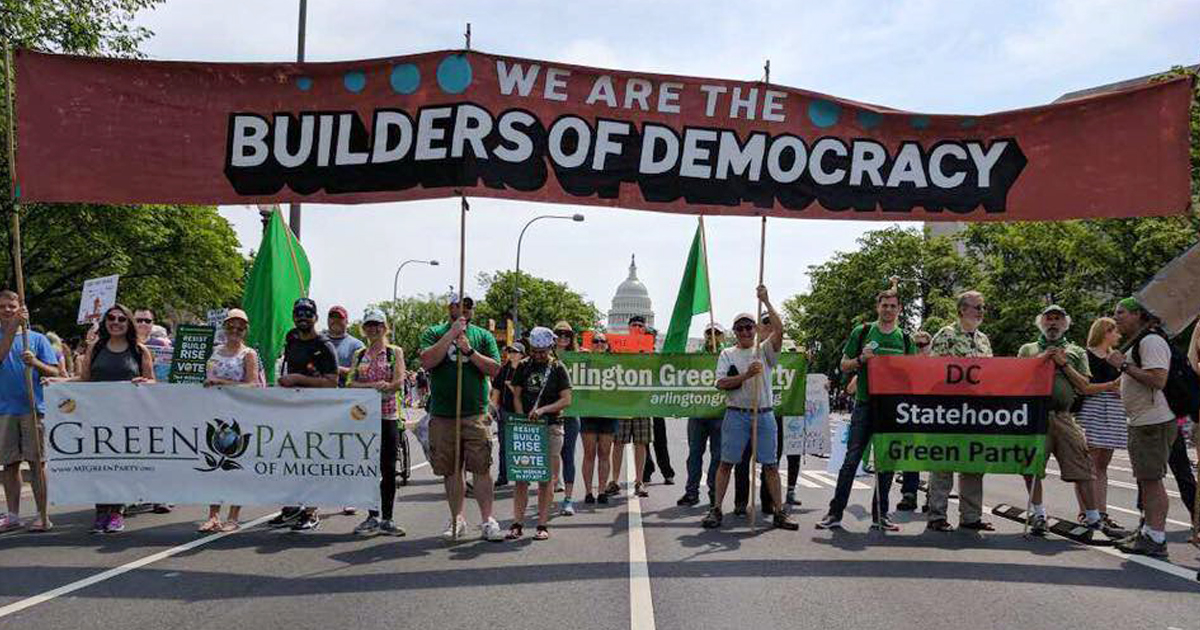 Our nation was born as the first great experiment in modern democracy. We seek to rescue that heritage from the erosion of citizen participation. Moreover, we seek to dissolve the grip of the ideology, intoned by big-money interests for more than twenty years, that government is intrinsically undesirable and destructive of liberty and that elected officials should rightly "starve the beast" by slashing all spending on social program, in the name of freedom. We challenge that tactic by calling on all Americans to think deeply about the meaning of government of the people, by the people, and for the people. In a democracy, individuals come together to form structures of governance that protect and advance the common good. We the citizens are the government, and we the citizens can direct it to fulfill its finest goals and purposes. Our citizens must not permit usurpation of their authority by acts of individuals and government agencies that isolate or insulate government from their oversight and control. We, the People, have a responsibility to participate in self-government through all the means that our Constitution provides.

Citizens of a democracy must have the information and ability to determine the actions of their government. Vast concentrations of wealth and power that have occurred in recent years are inherently undemocratic. The deregulation of corporate activity and the decentralization and underfunding of the regulatory structures that remain—accompanied by the centralizing of big money —has been a disaster for our country. The true owners of the public lands, pension funds, and the public airwaves are the American people, who today have little or no control over their pooled assets or their commonwealth.

The power of civic action is an antidote to the corporate control of so much of our lawmaking and regulating. The pervasive abuse imposed by corporate power increasingly undermines our democracy, but the Green Party seeks to rekindle the democratic flame. As voting citizens, taxpayers, workers, consumers, and stakeholders, we unite to exercise our rights and, as Thomas Jefferson urged, to counteract the "excesses of the moneyed interests." Toward this end, we consider serious reform of campaign funding to be essential, as well as curbs on the influence of corporations on lawmakers and regulatory agencies.

The Green Party considers American democracy to be an ongoing, unfolding project that is dynamic and creative in nature. We are committed to the strengthening of our civil society, including the many mediating institutions at the community level that have always characterized our democracy. We seek to heal the alienation and apathy that has been cultivated in the citizenry by the power brokers of the status quo. Righteous anger about the crippling of our democracy is rising in the land, and the Greens offer constructive alternatives. In addition, we seek to repair the plummeting opinion of the United States in the international community resulting from our arrogant, narcissistic foreign policy of recent years. A growing and grave imbalance between the citizens of this country and the interests that extract power from the citizens is an imminent danger to our security and national and global social stability. We strongly feel that our country should view itself as a member of the community of nations... not above it. The United States could well play a leadership role in that community but only if we become committed to an eco-social vision of peace, national self-determination, and international cooperation.

Our goal is to become an important political force in this country, and to present candidates for election at every level of government.

Greens will crack down on political corruption and strengthen the voice of the people at all levels of government.

Everyone deserves the opportunity to influence the governmental decisions that affect them. But the defining characteristics of modern politics in the United States are a corrupt campaign finance system that enables corporate and wealthy elites to purchase political outcomes; and an abundance of anti-democratic electoral, ballot access and debate rules designed to minimize participation and choice.

To achieve genuine citizen participation, citizens must share in the power of governing. Greens seek to bring vibrant grassroots democracy to every part of the United States.

Greens seek to repair U.S. electoral system, from how elections are financed, to conducting them in more fair and representative ways, to ensuring accountability and transparency on all levels of government. In particular, Greens believe that the U.S. winner-take-all voting system is fundamentally flawed, resulting in low voter participation, little choice or competition in countless elections, and far too few women and minorities in elected office.

The failure to fulfill the promise of democracy leaves millions of people in our country too discouraged to vote and others who chose to vote seemingly trapped among false and limited choices. A system that promotes full and fair representation would draw millions of people in the United States into civic life and could revive democracy in this country.

Community is the basic unit of green politics because it is personal, value-oriented, and small enough for each member to have an impact. Community involvement is a foundation for public policy.

Social diversity is the wellspring of community life where old and young, rich and poor, and people of all races and beliefs can interact individually and learn to care for each other, and to understand and cooperate. We emphasize a return to local, face-to-face relationships that humans can understand and care about. Among Greens, our guiding principle is to think globally and act locally. Community needs recognize a diversity of issues, and local control recognizes a variety of approaches to solving problems, ones that tend to be bottom-up not top-down. Green politics does not place its faith in paternalistic big government. Instead,

Greens believe face-to-face interactions are essential to productive and meaningful lives for all citizens.

The Green vision calls for a global community of communities that recognize our immense diversity, respect our personal worth, and share a global perspective. We call for an approach to politics that acknowledges our endangered planet and habitat. Our politics responds to global crises with a new way of seeing our shared international security.

We will conceive a new era of international cooperation and communication that nurtures cultural diversity, recognizes the interconnectedness between communities, and promotes opportunities for cultural exchange and assistance.

We call for increased public transportation, convenient playgrounds and parks for all sections of cities and small towns, and funding to encourage diverse neighborhoods. [See section C.Transportation in chapter III] We support a rich milieu of art, culture, and significant (yet modestly funded) programs such as the National Endowment for the Arts and National Endowment for the Humanities. [See section E. Education and the Arts in chapter II]

Independent, critical media are essential to an informed and healthy democracy.

Citizens must have ready access to news and information to make responsible informed choices as voters and to carry out their other duties of citizenship.

The United States' original communications policy was the 1st Amendment. Freedom of the press was guaranteed in the Constitution because an exchange of ideas and an unfettered debate were considered essential components of a democratic society. Today, however, government policy is designed less to enhance public deliberation than to boost the profitability of media corporations.

Our media laws and rules promote the formation of huge media conglomerates while discouraging competing voices. As a result, the mainstream media is increasingly cozy with the economic and political elites whom they should be investigating. Mergers in the news industry have accelerated, further limiting the spectrum of viewpoints in the mass media. With U.S. media overwhelmingly owned by for-profit conglomerates and supported by corporate advertisers, investigative journalism is in an alarming decline.

In response, Greens will strengthen citizens' influence over the broadcast media, break up the dominant media conglomerates and boost the number of community and non-profit news outlets, all to fortify the media's crucial watchdog function and to help create a more diverse and lively exchange of ideas in America.

Since governments too often have an interest in controlling the flow of information, we must constantly guard against official censorship. In our society however, large corporations are a far more common source of censorship than governments. Media outlets kill stories because they undermine corporate interests; advertisers use their financial clout to squelch negative reports; powerful businesses employ the threat of expensive lawsuits to discourage legitimate investigations. The most frequent form of censorship is self-censorship: journalists deciding not to pursue certain stories that they know will be unpopular with the advertisers.

At the start of a new century, we stand poised between the geopolitical conflict of East versus West; a future marked by the aftermath of the catastrophic events of September 11, 2001; the dangers of global terrorism; the U.S.-led invasion of Afghanistan followed by the unprovoked invasion and occupation of Iraq; the escalation of conflict in the Middle East; and the continued research and development of nuclear weapons and the stockpiling of bio-chemical weapons.

In the area of trade, third- and fourth-world economies and resources are being ravaged and our own economy and job security undermined by global corporatization, which concentrates greater power in the hands of fewer interests who are unaccountable to the vast majority of the world's people.

As we overcome continued conflicts and violence, we realize the difficulties inherent in encouraging democracy and of advancing the cause of peace. We face a more complex set of challenges in how our nation defines its national security. Greens support sustainable development and social and economic justice across the globe. Reducing militarism and reliance on arms policies is the key to progress toward collective security.