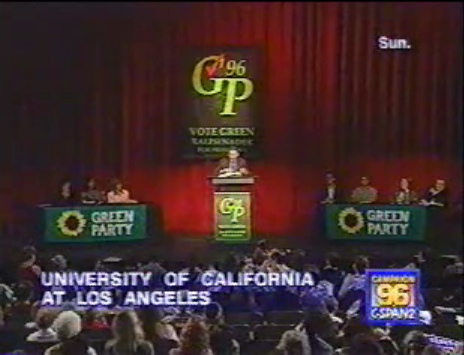 Short version of Winona LaDuke's acceptance speech for Vice-President for the Green Party in 1996. Filmed on the White Earth Reservation in Northern Minnesota where LaDuke lives. A short and long version was prepared, in case of time constraints. This rare short version footage was not broadcast. Instead the longer version was played on the large movie screen in the theatre where the convention took place and was carried live on C-SPAN.
Time: 02:21

Nader accepts the presidential nomination and goes on to discuss a number of themes relevant to his candidacy. These include the need for a new majoritarian party in the face of Democrat and Republican similarity; the need for balancing duties as public and private citizens; and the need to return the notion of justice to the center of politics.

Nader discusses problems facing the country. These include the concentration of power and wealth; declines in real wages; lack of universal health care; NAFTA, GATT, and the problem of lowest-common-denominator harmonization demanded by free trade regimes; the tendency of the middle class to turn on the poor when the country is in decline; the lack of facts about corporate welfare in debates about public welfare; and skewed budget priorities.

Nader outlines solutions to the problems facing the country. These include developing alternative energy sources; following up on pilot housing projects to solve homelessness; a universal single-payer health care system modeled on Canada's; fast, reliable, and pollution-free public transportation; the use of pest management control, crop rotation, and organic farming; shift toward citizen and liberal education; upgraded labor laws; tax checkoffs to prevent pharmaceutical corporations from getting big gains from publicly-funded research; public funding of elections; improved ballot access for third parties; establishing the initiative, referendum, and recall in every state; adding a binding 'none of the above' option to the ballot; 12 year legislative term limits; and the reconstruction of civic community.