Michigan voters will have 30 green nominees to support 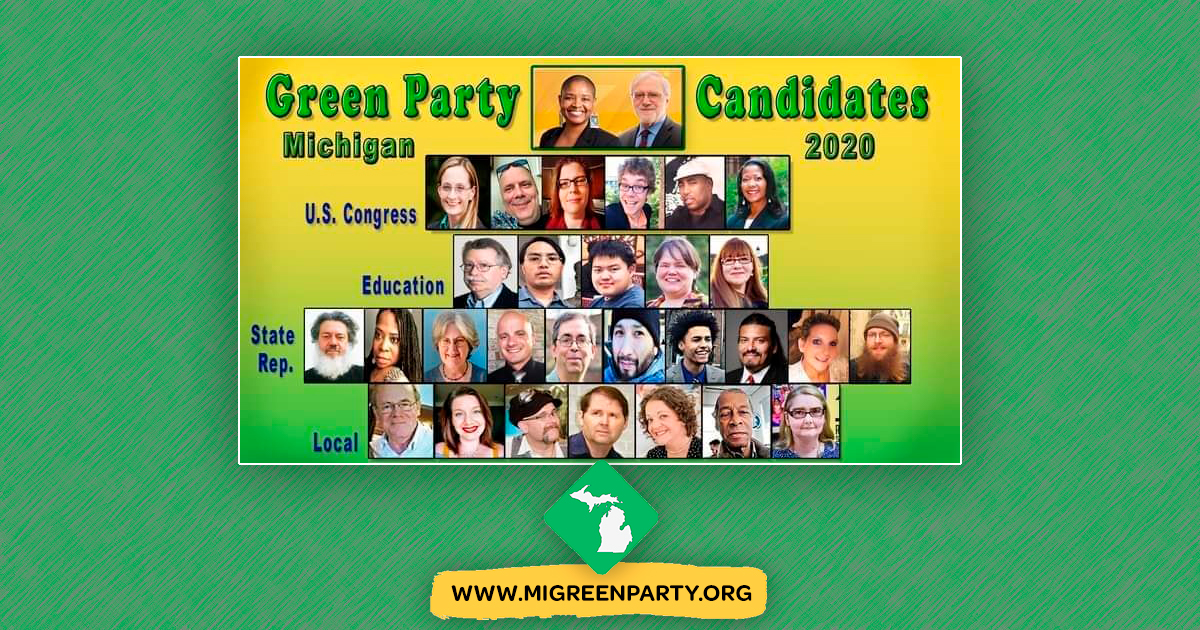 GRAND RAPIDS, Mi – The Green Party of Michigan (GPMI) still has thirty nominees for this fall's general election, eight on ballots statewide, after a late challenge to one local candidate was withdrawn.

After a consultation with the State Bureau of Elections in Lansing, the Wayne County Clerk's Office reversed an earlier decision and agreed that Evelyn Pridemore had filed her nomination paperwork correctly -- so she will be on the ballot for Redford Township Clerk.

All Michigan voters will have at least the eight statewide Green nominees to vote for:

And GPMI has nominated 16 more candidates across Michigan -- three for Congress, eight for the state legislature, and five for county and local offices. Four would serve Oakland County, and two each in Isabella, Kalamazoo, Kent, Midland, and Washtenaw Counties.

Elections Co-ordinator John Anthony La Pietra, who led GPMI's effort to reach out to the Bureau of Elections and the Wayne County Clerk's Office, thanks both offices for agreeing quickly to secure Pridemore's spot on the ballot. "I'm glad the county won't have to re-print or re-mail absentee ballots sent out with a Green Party candidate left off them -- as it did in 2010."

State law says GPMI can only nominate its candidates at a state convention or county caucuses, which must be held by the August primary date, La Pietra said. A caucus of Wayne County Greens nominated Pridemore July 25, so her forms were properly filed the next business day with the County Clerk. Township candidates seeking spots on the primary ballot are required to file with their township clerks.

A full list of Michigan's 30 Green nominees, with the latest contact information available for their campaigns, is available here.

For more information on the Green Party of Michigan, its platform, and its Ten Key Values -- and how *you* can get involved -- please visit the party's Website and the GPMI Facebook and Twitter pages.