A duty to find a better way 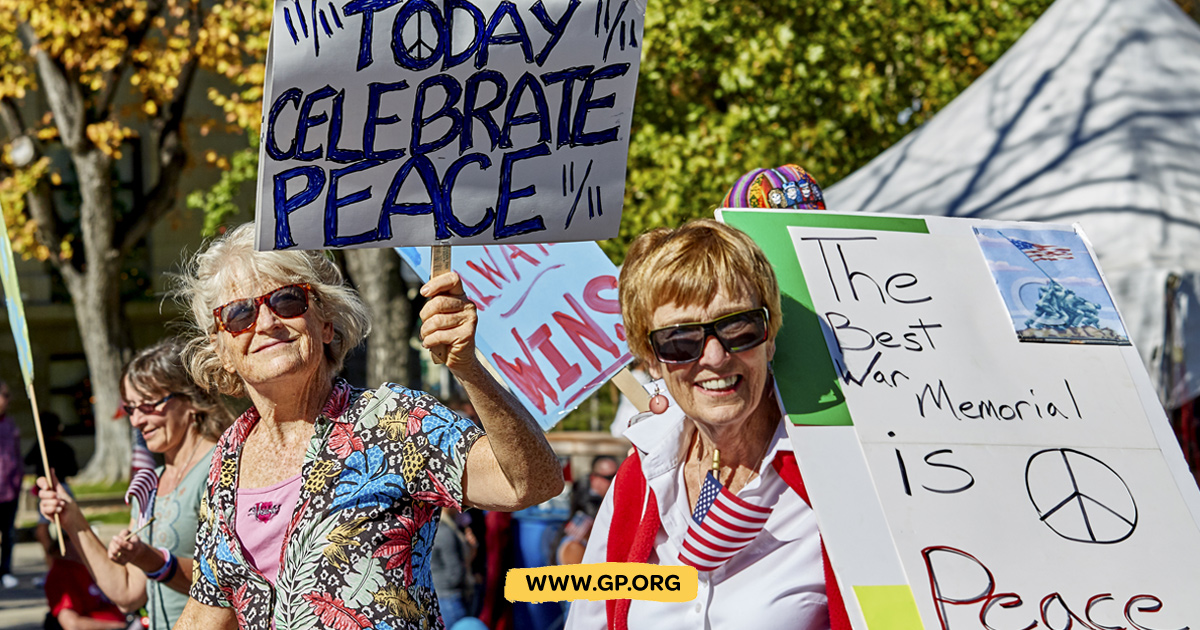 I came from a military family. In 1940 my dad and his twin brother went into the Navy, right out of high school. Dad was at Pearl Harbor when it was bombed. Since he wasn't "in for the duration," his service in the Pacific lasted til 1946, and then he tried civilian life for a couple of years, before putting in time in the Army and completing twenty years. During which I attended 13 schools, before I finished 9th grade, none of them on army bases, most of them in tiny farm villages, where the Nike missile base was a barracks for the privates, the missile "silo" was a cramped metal trailer, and the two families with kids were temporary and outsiders.

We were all girls in my family, and, except for my aunt Marianne, who was a navy nurse, the military didn't want women, so we were not expected to sign up. And I'm the only one, from my family, who went out and held signs. I was one of 6 students who held the first anti-war protest at the UA, in 1967, protesting job recruitment by Dow Chemical, makers of napalm. We ended up camping overnight, in front of the Old Admin Bldg, because the Dow men snuck out a back door that we didn't even know existed. A frat boy, who came up to throw cherry bombs at us, and otherwise torment, demanded to know if I "had a brother in Nam," because, otherwise, I had no right to an opinion. I said to him that I had classmates and friends, but he insisted that a brother, or maybe a husband, was the only ticket.

My husband's family was also military. In the part of Appalachia that they came from, no one was drafted-- they were Volunteers. They never saw a plane close-up, til they climbed on one to learn to fly it. John's dad was stationed at DMAFB, here in Tucson, when he met John's mom, who was a school teacher in Oracle, earning a master's at the UA. They married here, on a 3 day pass, but then he got called back, so a girlfriend went with her on the honeymoon trip to the Grand Canyon. The train tickets had already been purchased.

At the end of his military career, they came back to Tucson, and he ran the compulsory, for men, ROTC classes, at the UA. John recalls spending time, as a ten year old, roaming the campus museums during the summers, while his dad sat in his office at Old Main. But Edwin had retired from that, too, by the time a group of us took over Old Main. Actually, it was a fast and peace vigil, at the fountain, called by the Quakers and joined by the other student religious groups, which is why I was there, representing the Lutherans. Only, by then, there were lots of students who were past holding signs, mostly angry males, and one of them discovered that the door to Old Main was open.

When he went in, many followed, and the organizers decided it was better to be in there, talking, than to let desperate people decide this by themselves. A group of us stood and debated what Martin Luther King would have wanted, and someone pointed out that King was [the previous year, while I was in San Francisco's Visitation Valley, being a missionary] killed, so his ideas were "Dead!" The Quaker who had started the vigil pointed out that we would all die eventually, and that would not decide whether our ideas were right or wrong. Unbeknownst to us, as we trotted out our consensus model and debated what we should do, two guys tore through the back rooms and ransacked the ROTC files.

Meanwhile, the Lutheran minister was called in to negotiate us out of our sit in. The University wanted to call in the National Guard, in case we intended to burn the building down. The Rev pointed out that we were less likely to do that while we were still inside the building, and that patience should be shown. It was a Saturday, the campus was practically empty. Just wait. And he was right. Having gotten into this building take-over with no plan, those of us who thought that our point had been made, constructed an exit strategy [something our elders were not capable of.] We decided to leave so that we could go over to the nearby flagpole, and put the flag at half mast. The university police stood by, and let us. We prayed for the dead, then dispersed. Nobody got shot-- at least not on the UA's campus, not that day.

John's older brother had always wanted to be in the military. After a few false starts, and a quick marriage [to another military brat, whose Dad had flown glider planes into Europe on D-Day], Dave graduated as the best pilot in his class, and was sent to the relatively safe hinterlands of Texas, to teach the guys who would actually fly in Viet Nam, and the odd politician's son, who would never see war close up. Fifty-fifty odds that one of his students was George W Bush.

But Dave realized that he would never be promoted up the ladder if he didn't see combat. He tried to sign up, but they wouldn't let him go. [Like my dad, who had volunteered to go to Korea, but was too good at his job of fixing officers' jeeps in Japan, so was blocked]. To get around that, Dave learned French, so he could fly surveillance for the Vietnamese Armed Forces, who spoke French to their air traffic controllers. His unarmed plane was shot down, and he was killed, the last name on the monuments for Tucson and the UA. John, as a student, was marching against the war, among the huge throngs. He was the one with the brother, over there.

It was years before John and I met, although we must have been a more than one large crowded room at a given time, here in Tucson. When we met, I was a widow, and he had never married. We were both involved in politics, with big differences, but we also had a lot in common. He introduced me to his sister-in-law, who lived in Tucson and had never remarried, and to her two now-grown kids, who were 3 and 5 when Dave was killed, and who now had lives elsewhere. Gail had raised them well in some ways, and, like a lot of military kids, they raised each other. After Dave's death, she helped a Vietnamese refugee family resettle. And then she made a journalism career for herself, which began with a Memorial Day article, for the Arizona Daily Star, condemning the war.

When Gail eventually became disabled with a brain tumor, John and I changed our lives to become her caregivers. That is the part of the war that extends forever-- that the one who should be there to help, years later, is, instead, a name on a Wall.

Memorial Day is not Veteran's Day. I keep telling people, "Stop thanking veterans-- today is not about that." Memorial Day is remembering the loss that we all suffer when we send somebody to die. It especially belongs to the families, but life is so intertwined, that you can become family, years later, feel the loss, as though it were today. I've touched Dave's name on the Wall/s, and I've touched the places where he should have been, and was not, and the differences that it made, to people I care deeply about, and people who will never even know that he existed.

I marched in a lot of marches over the years, stood in a lot of vigils. With my Church Women sisters, I helped tie a ribbon around the Pentagon. I've been cheered, been ignored, been spit on by old men with VFW hats. Been told I needed a brother, before I had permission to care. Before John marched, he wrote Dave, asking how he'd feel about his younger brother coming out against the War. Those last letters back were haunting, and gave permission.

But Memorial Day is permission for all of us. It is permission to say that we have an obligation, a duty, to find a better way, because their deaths were in our name. Praise of their courage, in a speech or a flag colored bumper sticker, is actually pretty cheap. Throwing one beloved corpse upon the next, to justify having thrown the first, is sad beyond grief. The truest word is that they all died because we did not work hard enough to build a world where war is avoided, acknowledging that peace is the better option.

They planted a Peace Rose on Dave's grave, but it was gone by the time we buried Gail beside him. The next year, after Gail died, John and I took my Dad back to see Pearl Harbor again. Many briefly thanked him for his service, when they realized he had been there. That's okay. But I want there to be at least one day, when we remember those who did not survive war, when we pledge ourselves, with more than a peremptory gesture, to the harder work of making peace. That is what Memorial Day is to me.