Agriculture as a Weapon of Domination 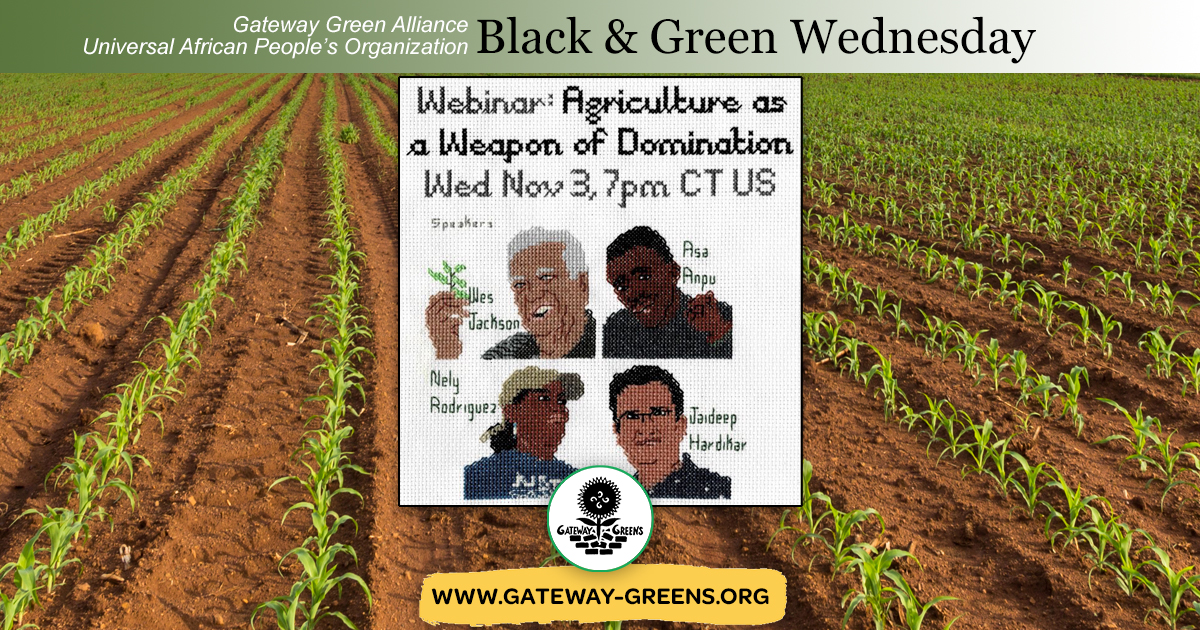 The webinar will begin with Wes Jackson explaining the 10,000-year-old problem of agriculture: cultivation of annual grain crops which compromise soil ecosystems and organic matter. Perennial grain crops and cropping systems can make food-producing ecosystems as resilient as natural ecosystems.

Asa Anpu will cover what colonialism means to the colonized, especially with regards to food deserts imposed by settler “farmers” on Black people within South Africa and how the Uhuru Movement is challenging this.

Nely Rodriguez will share how a small group of farmworkers joined with the Fair Food Program to completely change conditions of their labor, from eliminating wage theft to modern-day slavery. US allies can support farmworker rights through the Boycott of Wendy's.

Jaideep Hardikar will address problems facing small and marginal farmers who comprise 83% of India farm households, commercialization of the countryside due to steady withdrawal of state support, and the growing network of people's collectives and agro-ecological approaches.

Moderator Delilah Barrios hosts "As All Get Out" on The Populist Voice channel.

The webinar is NO COST, but you need to REGISTER to attend.

Click HERE to Register for Webinar or copy link into your browser:
https://us06web.zoom.us/meeting/register/tZIsduitpjMsGNU0a8Wqpyj4VEVM1FsFg8Md

After registering, you will receive a confirmation email containing information on joining the meeting.

Wes Jackson, co-founder of The Land Institute, has a doctorate in genetics from North Carolina State University and has written Altars of Unhewn Stone, Becoming Native to this Place, Nature as Measure, and Hogs Are Up, Stories from the Land with Digressions.

Asa Anpu is an African from Occupied Azania (South Africa), who was born in 1992, became a revolutionary in 2013, and joined with the Uhuru Movement to spread the message that colonized people must overturn colonialism in every possible way.

Dr. Aisha Fields will answer questions on behalf of Asa Anpu. She is International Director of the All African People's Development & Empowerment Project (AAPDEP) which builds dual power programs in African communities worldwide under the leadership of the African People's Socialist Party.

Jordan Lake will interpret for Nely Rodriguez. She is a co-coordinator of the Student/Farmworker Alliance, bringing young people from across the country into CIW's struggle, and mobilizes farmworker allies within the Campaign for Fair Food, currently targeting Wendy's.

Jaideep Hardikar is a journalist, writer and researcher in Nagpur, India. He is a Roving Reporter with the People's Archive of Rural India, a fellow of the New India Foundation, and the author of Ramrao and A Village Awaits Doomsday.

Delilah Barrios will moderate the program. She hosts "As All Get Out" on The Populist Voice channel and is the Green Party candidate for Texas Governor as well as being active in its Latinx caucus and Indigenous caucus.