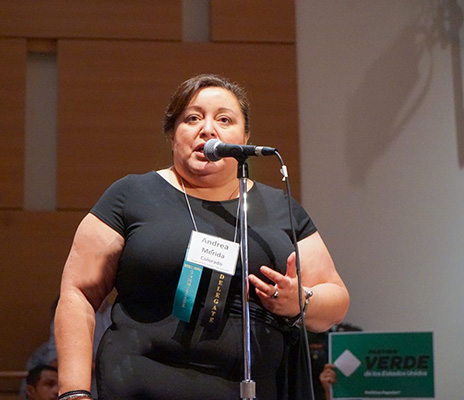 Andrea Mérida Cuéllar is a Denver-based education and social justice activist, hailing originally from Rochester, NY but living in Denver, CO since the early 1970s. The daughter of Guatemalan immigrants with their own lifelong commitment to social justice, Andrea has served her community in many ways, from student leadership to service in the U.S. Army, to service as an elected member of the Denver Board of Education and now as a national co-chair of the Green Party of the United States and co-chair of the Green Party of Colorado. Until August 2016, she was the only Latinx person in national political party leadership.

During her tenure as a member of the Denver school board, serving as Denver's first-ever Green elected official, she was the prime driver of a landmark civil rights ruling regarding English learners in the Denver Public Schools. As a result, now even charter school students in Denver must be provided with support to learn English in public schools, where previously charters were allowed to cherry-pick from among students by English proficiency level.

Andrea still lives in Denver, where her blended family lives in Denver's Westside, spending her time both in politics and in managing and singing in her husband's funk band, Gumbo le Funque.  Andrea's musings can be found at her website and on her Huffington Post column.

Andrea is a member of the BRPP (Rules), Outreach and Media committees.  She is a co-founder of the GPUS Latinx Caucus which gained accreditation in 2015.  She is active in Denver's #BlackLivesMatter movement and steering committee member of 15Now Colorado.  She is fluent in English and Spanish.