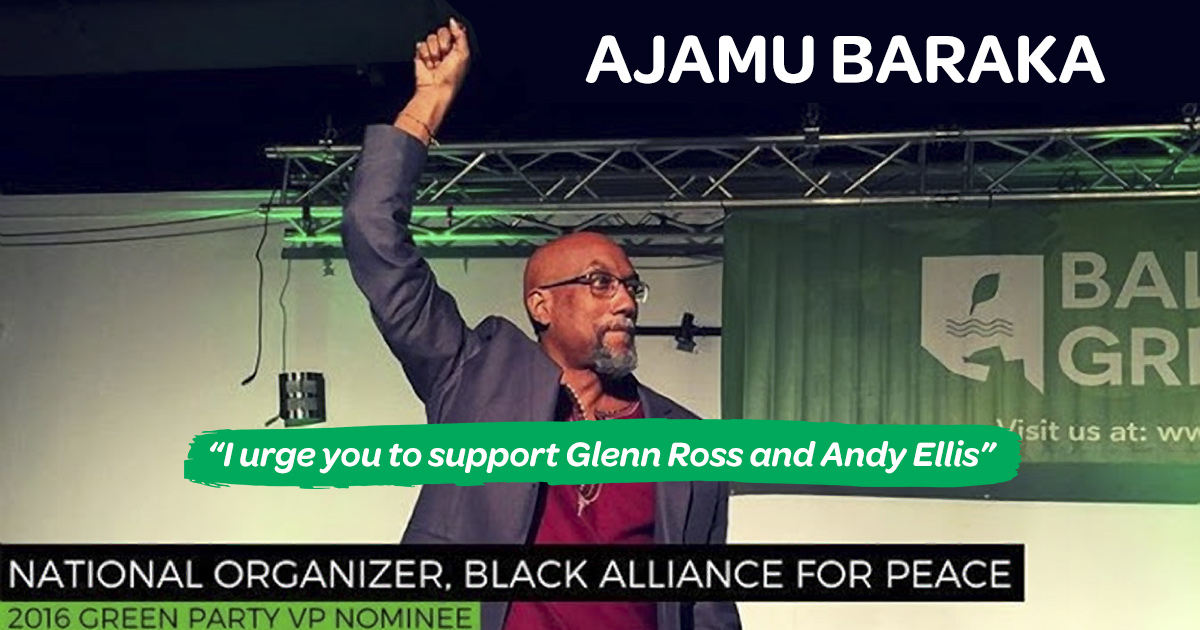 Since I ran for vice president in 2016, I have traveled the United States and talked with many Greens and others. A key to getting to the next level as a political party is showing we can challenge Democrats and win. If Greens successfully challenge leaders of the Democratic Party, suddenly many people who are fed up with the corruption of the Democratic Party and its subservience to big business interests will see they have an alternative.

That is why I am so excited about the campaign that Glenn Ross and Andy Ellis are running in Baltimore for the House of Delegates. It is a multi member district where three candidates are elected and they are challenging two long-time incumbent Democratic Party leaders. One is the Majority Whip, he takes funding from big business like the bail bonds industry and uses it to line up votes for legislation that serves their profits. The other is a Baltimore machine politician who tells voters what they want to hear, then votes against their interests. She did this on a recent mandatory sentencing bill, saying she opposed it then voting for it.

Imagine if we wake up on November 7th to the news that the Majority Whip in Maryland lost to a Green Party candidate.

It will be the result that makes the Green Party the second party in Baltimore and will encourage others to challenge Democrats who have been the only party to win election in the city for more than 50 years.

In Maryland, where the Democrats have dominated the state for decades, suddenly progressives will not be stuck in the Democratic Party. There will be a viable alternative.

And, throughout the country, Greens will see an example. They will know -- we can win.

That is why I am urging you to support the team of Glenn Ross and Andy Ellis. Donate here.

Andy and Glenn are doing the daily work of knocking on thousands of doors in their district. They and their team of young Greens, are making sure there is person-to-person contact with voters. They have researched the voting trends in their district and know which neighborhoods to focus on.

I've visited Baltimore multiple times when I ran on the Stein-Baraka ticket and after the election. I've always been impressed at the energy in the Baltimore City Green Party. It is racially diverse and young, combining this with experience. I'm not surprised to see this kind of race developing in Baltimore.

Andy and Glenn are a great compliment to each other. Glenn has been a community organizer for decades in Baltimore City, who educates people around environmental racism through the "Urban Environmental Toxic Tour and has been recognized as the Best Community Activist by the Baltimore City Paper.

These are two candidates that deserve our support. Donate to them now.

Glenn and Andy have a plan to win and are doing the work to accomplish it. Over the next two months they need to keep paying their young Green staff member, print signs and other materials, send postcards and build their social media advertising campaign. Their goal is to raise $36,000; so far they have raised $12,000. Your support will make a big difference.

You can donate online at https://www.greenteam45.com/donate or you can mail a check made out to "Green Team 45 Slate" to Glenn and Andy's Campaign office at 509 N. Milton Ave. Baltimore MD 21205 .

Thank you for your support.
Ajamu Baraka