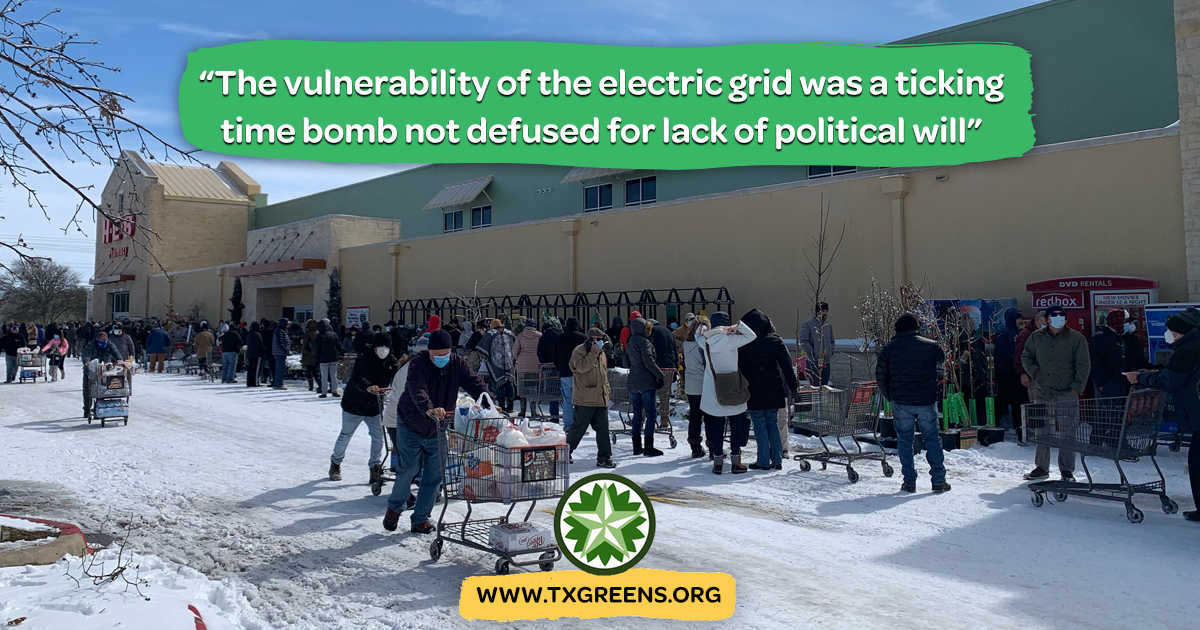 There is bipartisan responsibility for utility failures during Texas' arctic freeze, resulting from privatization, regulatory capture by industry interests & profit motive that erodes the public infrastructure. Though the crisis occurred under Republican leadership, ERCOT was established in 1970 and the Public Utility Commission began deregulating in 1995, during Democratic administrations. The duopoly parties are too invested in capital interests and have failed to prioritize the public interest.

The vulnerability of the electric grid was a ticking time bomb not defused for lack of political will, and it's not the only one set to go off.

Just one pressing example, the threat of devastating storm surge through Galveston Bay and the petrochemical facilities operating in the region, is like looking down the barrel of a loaded gun every hurricane season. Netherlands-style infrastructure initiatives have been popularly discussed as the "Ike Dike", but again, political will to protect millions in the Gulf Coast region has not materialized.

Local officials try, generally, to do their best to manage the crises thrust upon us all, but there is a limit to what can be dealt with on an emergency basis. We need real political leadership to make decisions in the public interest, like ensuring grid reliability through proper connectivity, regulation, and weatherization; or implementing large-scale climate mitigation initiatives, or providing fundamental public health & economic supports during the covid crisis. On SO many fronts, our leadership is failing us.

How can we find the political will to put these monumental social needs ahead of entrenched capital interest? That question is at the heart of what motivates Greens to fight for ballot access, to try to create a party where eco-social, intersectional perspectives can be represented unequivocally. The duopoly parties maintain an unconstitutional stranglehold on the electoral processes of this country, making a project such as building an electoral alternative extremely difficult. Still, Greens demand representation for our political perspective.

At every turn, Americans are left to fend for themselves. Texans are proud of our resilience because we are forced so often to rely on it. In these difficult times, our communities band together in a way that undercuts the poisonous red vs. blue narrative, so nurtured by media. We ask those whose first instinct after the freeze was to spin blame toward renewables or dehumanize victims for voting team red or team blue, to think again about our diverse communities and our need to heal together as one society. We ask you to open your hearts to one another so our society can honestly discuss our social needs.

As President Joe Biden's first month in office shows us, positive-sounding campaign promises will be abandoned, and nothing will change much as the agenda of empire grinds on. We pursue a foreign policy seeking to dominate fossil fuel energy reserves in the antiquated geo-political strategic context. Instead of dropping more bombs and broadening our military engagement, we should be redesigning our systems off of fossil fuel dependency & closing production lifecycles to find a way to live within sustainable limits.

Such changes will undoubtedly be painful to the balance sheets of industries heavily invested in the status quo, but we can not allow the outsized influence of organized money to continue to drive us off the ecological cliff. Our military is the largest polluter in the world. We must turn away from militarism and make prudent choices now to grow toward an inclusive, just, & sustainable society. Greens are attempting to contribute to that vision. Will you support our efforts?