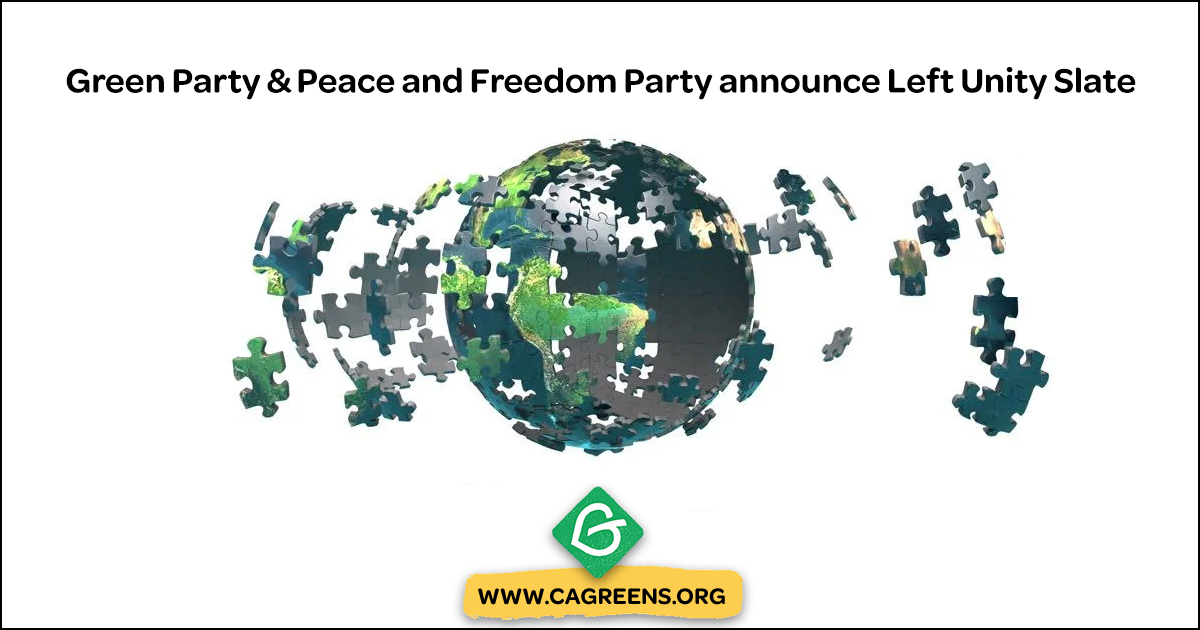 The Green Party of California delegates have voted to endorse a “Left Unity Slate” composed of Green Party and Peace and Freedom Party candidates for the June 2022 Primary Elections:

SACRAMENTO, CA – A historic decision, this united strategy was based on the many shared values between the Green and the Peace and Freedom political parties. Among these values are guaranteed access to healthcare, also known as expanded and improved Medicare For All, truly affordable housing, union-wage jobs, public ownership of energy, ending wars for profit, and a comprehensive climate plan, including a just transition to 100 percent renewables.

Since the 2020 presidential elections when the Green Party’s Howie Hawkins and Socialist running mate Angela Walker formed the first “Left Unity'' campaign, the movement for a united left has gained support among independent voters. “We need to unite the many against the few that finance the two big capitalist parties,” Hawkins said <https://www.youtube.com/watch?v=ubJnxaSA-Ck> during his campaign. “We need our own political voice. We need our own independent power.”

Insurance Commissioner candidate Nathalie Hrizi said, “Our campaign calls for a single-payer healthcare system that removes the insurance companies altogether. A state single-payer system would guarantee health care for all people, with the state government paying all medical bills. It would be like Medicare for all. Contrary to right-wing propaganda, Medicare is far more efficient than private insurers."

"The question always comes up about how do we pay for what we need,” said Laura Wells, candidate for CA Controller. "There are solutions. We can implement Public Banking so that our state and localities stop paying high interest to Wall Street banks. We can save money with a rational healthcare system, which Democratic leadership again stalled despite having a super-majority and a budget surplus. And we can certainly tax the rich! Nobody needs to be a billionaire, and Forbes tells us California has 189 of them, up 24 from the year before. That makes no sense, the rest of us are already paying fees and fines and tuition and taxes. Tax the rich."

“If we had electoral reform, such as multi-winner ranked-choice voting, a candidate-based form of proportional representation, California’s voters would have a bigger voice in policies that are critical to their lives,” said Gary Blenner, candidate for CA Secretary of State. “For example, we would be leading the way in implementing a single-payer healthcare system rather than allowing the Democrats to wipe it off the table.”

“Through this early endorsement step, the Green Party plans to help Greens from across the state get engaged in the campaigns of these endorsed candidates early and help build support for these corporate-free campaigns that do not accept contributions from corporations and their industry lobbyists,” said Greg Jan, Statewide Candidate Subcommittee member, and Green Voter Guide editor.

Additional candidates, including Governor, will be considered for endorsement in early December.