Green Party statement on the impasse between Catalonia and Spain 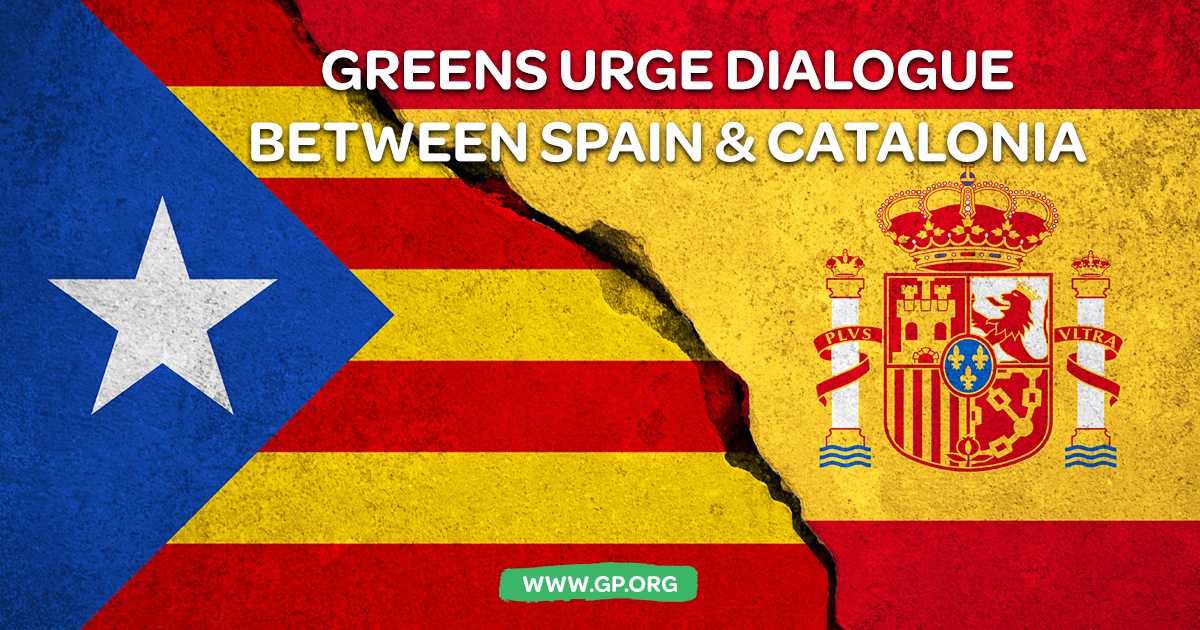 WASHINGTON, D.C. -- The Green Party's International Committee, on behalf of the party, has issued a statement on the crisis in Catalonia. The text of the statement is appended below.

The Green Party condemns Spain's brutal suppression of Catalans who tried to vote in the referendum for independence on Oct. 1 and calls for peaceful negotiation without threats of reprisal to solve the impasse and for the release of political prisoners and withdrawal of sedition charges.

Greens urge dialogue for a peaceful resolution, condemn Spain's violent suppression of Catalans who tried to vote in independence referendum

Greens urge global support for the political rights, including the right to dissent and seek self-determination, of the Catalan people and nonviolent resolution of the crisis.

Statement from the International Committee of the Green Party of the United States
Wednesday, October 18, 2017

Whereas the Spanish central government has shown outrageous brutality and disproportionate violence against the Catalan people as they peacefully tried to cast their votes across the region in a popular referendum held this past October 1 on the question of Catalan independence from Spain, and

Whereas this same government is again now proving incapable of providing a negotiated, sustainable and mutually acceptable solution to the legitimate political, economic, and cultural grievances and aspirations of large sectors of Catalan civil society, as clearly expressed in the results of said referendum;

Therefore, the Green Party of the United States fully supports the present call by the acting Catalan parliamentary leadership for a direct, two month long, unconditional dialogue with the central government in Madrid to try to reach a negotiated agreement in response to the present impasse in the political, and legal status of Catalonia in relation to the Spanish state and its peoples, as presently constituted.

The Green Party of the Unites States also vehemently opposes the Spanish central government's decision to implement Article 155 of the constitution in response to the present impasse in Catalonia. This action, if carried out, would de facto "illegalize" the presently elected Catalan autonomous government and place all of its critical authorities under the Spanish central government's authority.

We strongly believe this will only serve to exacerbate the present tensions and risk a very dangerous escalation of an already delicate situation that could further fracture and galvanize not only Catalan society, but Spanish society as a whole.

We furthermore call for the support of the popular call across Catalonia for the Spanish authorities to immediately release political prisoners, Jordi Sánchez and Jordi Cuixart, and for the Spanish attorney general's office to withdraw all charges of sedition against all acting Catalan government officials for their nonviolent actions in defense of the right of Catalans to peacefully cast a vote during the October 1 referendum.