Islamophobia an effective club to distract from klepto-plutocracy 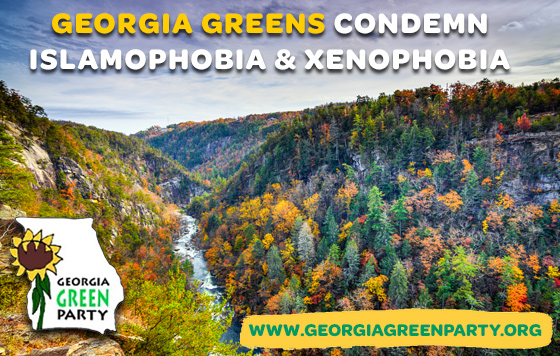 "Islamophobia and Xenophobia have become quite the effective club in the bully's arsenal to distract us from the klepto-plutocracy which has its hands on the levers of this country, and its finger on the button to its nuclear weapons arsenal", said Hugh Esco, a thirty-six year resident of Georgia who serves as Mr. Dixon's co-chair. "As long as we remain distracted by the myths of American Exceptionalism and white supremacy, we miss the economic power grab over the wealth produced by the workers of the world, for the benefit of the sixty-two and their political allies." A recent Oxfam report, 'An Economy for the 1%', reports that 'In 2015, just 62 individuals had the same wealth as 3.6 billion people – the bottom half of humanity. This figure is down from 388 individuals as recently as 2010.'

In his first week in office President Trump killed 50 in Yemen with drone strikes, a practice normalized by his predecessor, former President Barak Obama. He has also been holding daily photo opportunities to sign (so far twelve) executive orders and executive memoranda on a range of subjects. Additional executive orders have been publicly discussed.

The Los Angeles Times on Wednesday published a six page draft for one presumably being considered by the administration, intent on 'protecting the American people from terrorist attacks by foreign nationals admitted to the United States'. It proposes to suspend the enforcement of existing visa-issuance rules to 'Nationals of Countries of Particular Concern', while also revising signficantly the process for handling other visa applications, to require significant new procedural cooperation by nations of origin in the process, and significant new procedural hurdles for applicants.

"This is vetting so extreme, as to not slow, but stop visas altogether. This 'Countries of Particular Concern' is a euphemism for nations being bombed or occupied by the U.S. military", said Esco, who has twice run for Lieutenant Governor of Georgia on the Green Party ticket. "First our tax dollars are misallocated for imperial wars of foreign aggression and occupation, then we blame those we occupy for organizing armed resistance to our nation's acts of state-sponsored terrorism, and then we shut down entry for the refugees our policies create, justifying it all with irrational fear-mongering for the faith relationship a quarter of our global neighbors have with our Creator."

In Trumps inaugural address last Friday, the 45th President stated: "We will reinforce old alliances and form new ones - and unite the civilised world against radical Islamic terrorism, which we will eradicate completely from the face of the Earth."

"Islamophobia provides us permission to assume that all muslims are dangerous violent extremists. When will we be at least as concerned for those victimized by our own nation's state-sponsored terrorism against sovereign nations around the world?" asked Esco. "Why do we not surveil the Catholic and Lutheran churches. Wasn't the 2012 Sandy Hook massacre by Adam Lanza, 'a lone Catholic terrorist', and the 2015 massacre at Mother Emanuel AME in Charleston by Dylan Roof the work of an 'extremist Lutheran terrorist' with a political agenda?"

Among the orders signed so far, the Trump Administration has established as national policy, the immediate construction of a wall on the southern border; blocking federal funds from sanctuary cities, hiring 10,000 new immigration officers and making it national policy that local law enforcement officers act as immigration officers; expediting environmental reviews of high-priority infrastructure projects; inviting TransCanada to resubmit its permit application, while ordering expedited consideration for both XL and Dakota Access Pipelines permits; freezing the filling of vacant or new positions for all federal agencies, except for military and public safety positions; freezing enactment of all regulations pending but not yet effective; reinstituting the Reagan era global abortion gag rule related to US foreign aid for health care providers.

The Georgia Green Party is an independent political party working for a just peace which values democracy and sustainability. Its Presidential nominee Jill Stein took 7,674 write-in votes in Georgia's recent election, though hundreds of votes were lost by the failure of election staff to ascertain voter intent and count votes cast for the Green Party and other variations on Stein's name, an issue which plagues write-in campaigns.