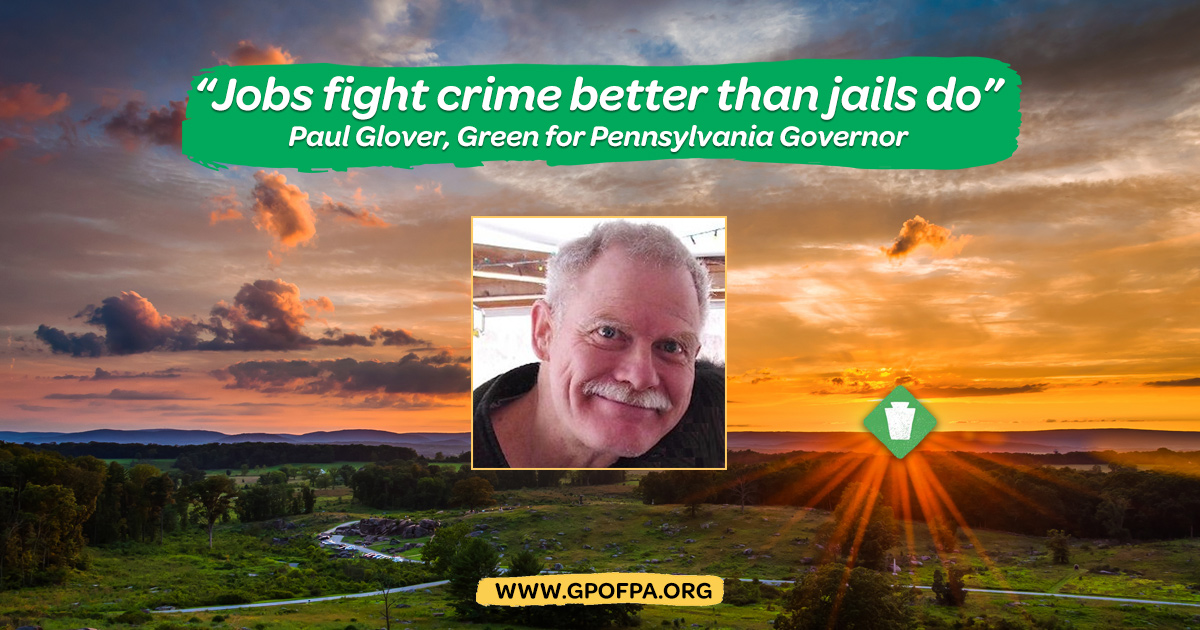 "Jobs fight crime better than jails do," said Paul Glover, the Green Party candidate for Governor of PA. "We can fully employ the next ten generations of Pennsylvanians by rebuilding our cities in balance with nature." Glover said, when he is elected Governor, he will establish a Green Labor Administration (GLAD) and a PA State bank, which will invests tax revenue and pension funds to accelerate this job-creation process.

The Green Party of Pennsylvania (GPPA) has nominated Paul Glover to be its 2018 candidate for Governor. The Green Party Platform calls for a "transition to 100 percent renewable energy by 2050, with at least 80 percent achieved by 2030, using wind, solar, ocean, small-scale hydro, and geothermal power." The Green Party will "create an inclusive program to train workers for the new, clean energy economy, focusing on both the environment and social justice, and prioritize the creation of green jobs in communities of color and low-income communities."

For more than 40 years, Glover has been a developer of green jobs programs. As Governor, Glover plans to shift the PA budget away from prisons and into schools that prioritize green job skills. Glover is author of the books "Deep Green Jobs" and "Green Jobs Philly," which detail how to create 100,000 green jobs in Philadelphia. "Philadelphia has a 26% poverty rate and a 38% high school dropout rate," he notes. "These Philadelphians, and such people statewide, will not likely get STEM jobs. So we need to create 'stem' jobs to manage urban greenhouses on our vacant lots, plant orchards, install solar panels, remove excess paving, build low-cost tiny houses, and so forth."ť

In addition, Glover proposes what he calls "Police Integrity Congresses," which transfer control of police hiring, firing, and standards to the communities most affected by police patrols. "Police departments and police unions often protect bad officers, while police review boards have little leverage," he explains. He also calls on mainstream media to cease printing mug shots, which he says "make criminals famous while reinforcing false stereotypes of black males."ť

Glover is founder of the Philadelphia Orchard Project, plus a dozen other green organizations including Ithaca Hours local currency; PhilaHealthia medical co-op; and Citizen Planners of Los Angeles. He is author of six books on community economic development. He taught urban studies at Temple University and ecological economics at Philadelphia University.