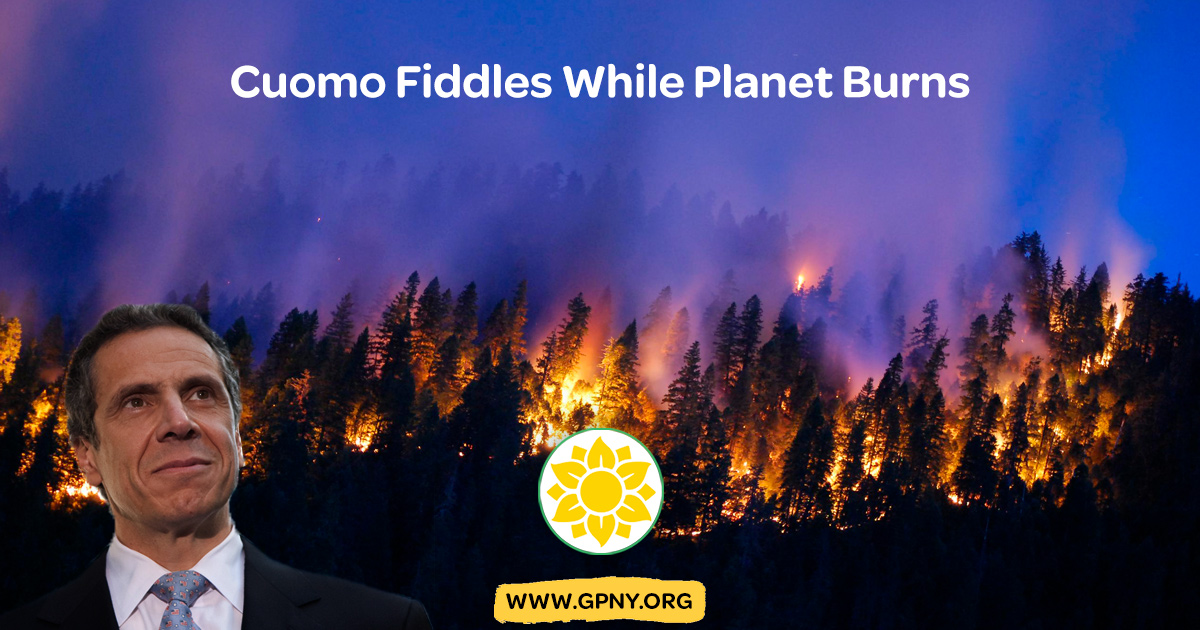 ALBANY, NY – 1/8/2020 – Green Party of New York (GPNY) officers have released a statement responding to Governor Cuomo’s 2020 State of the State address, castigating New York’s top Democrat for ignoring real solutions to issues like the climate emergency and instead focusing on “small-bore, low-stakes reforms” that “pose no threat to his wealthy donors.”

“Cuomo’s most ambitious move since his party’s takeover of the legislature last year was to install a commission to kill off minor parties in New York, under the guise of public campaign finance,” said GPNY Co-Chair Peter LaVenia.

“And not one of the 30+ proposals he trotted out today directly addresses the climate crisis, and they barely touched on pressing issues like our desperate need for single-payer healthcare or progressive taxation to close the $6 billion budget gap,” said Lavenia.

"We need a real commitment to halting new fossil fuel infrastructure in New York and a $10 billion investment in an Eco-Socialist Green New Deal,” said GPNY Co-Chair Gloria Mattera. “The CLCPA isn't enough to stop the worst effects of the climate crisis – the science plainly says the CLCPA’s goal of 2050 as a target for an 85% greenhouse gas reduction is too little, too late. And Cuomo has virtually eliminated the environmental justice provision from the bill and slashed funding!” said Mattera. “But Andrew Cuomo seems more concerned about legalizing alcohol sales in movie theaters."

The party’s response outlines solutions for New York’s looming $6 billion budget deficit, such as implementing the NY Health Act and ending the annual stock transfer tax rebate, in contrast to Cuomo’s cruel proposal to cut Medicaid by 1% while snubbing the movement for single-payer. “New York needs long-term progressive tax reform that shifts the burden to the wealthy and corporations and away from property and sales taxes,” said LaVenia.

"Cuomo's State of the State is once again disappointing. No climate crisis, single-payer, or progressive tax reform. Nothing on marijuana legalization. No talk about real electoral reform. Cuomo is a master of style over substance, but this is barely much of either. We need bold policies and he's given us thin gruel," said Mattera.