Death of Democracy in America 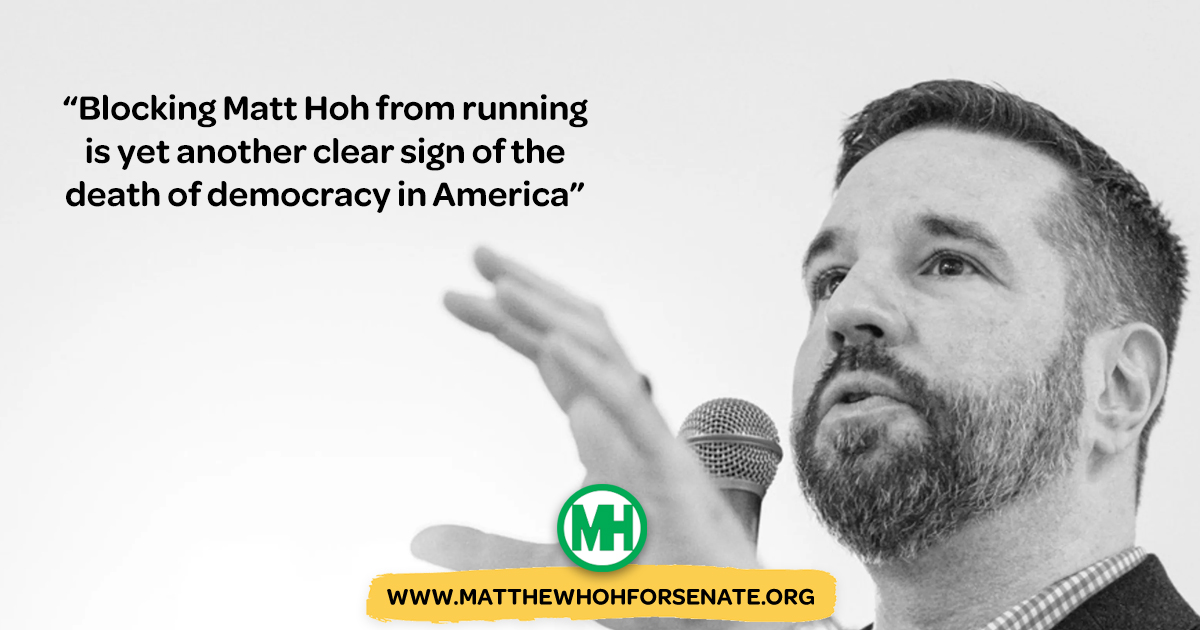 If the Republican and Democratic Parties are virtually identical on most issues involving big money, like the military, banking, corporations, and so on, you don't have a democracy. Democracy implies choice among many alternatives. We have virtually no alternatives. Hence this video by Briahna Joy Gray, which spells out a "Dem-Exit" in progress, as many Democrats wake up to the fact that the party almost never keeps its promises and is mainly engaged in raising money for itself and maintaining its increasingly tenuous grip on power.

Even worse, when other parties try to offer true choice, like the Green Party, the Democrats scheme to block legitimate candidates. Consider the case of Matthew Hoh, who's running for the Senate in North Carolina as a candidate for the Green Party. I know Matt. He's a former Marine who resigned in 2009 from the State Department in protest against U.S. policy in Afghanistan. Matt knew that Obama's so-called surge wasn't working and he spoke out against it. Matt had (and has) integrity. If only more people in the U.S. military and the foreign policy establishment had Matt's combination of integrity, intelligence, and guts.

Matt gathered more than 22,000 signatures to get on the ballot in North Carolina (he needed 13,685), so surely he was easily approved because we Americans love democracy and principled politicians like Matt Hoh, right? Wrong.

The Democratic establishment did everything possible, legal and illegal, to block him from getting on the ballot in North Carolina. And it appears they've blocked him.

What are they afraid of? Well, they're afraid to lose a bit of their money and power, and they're especially afraid of a principled person like Matt Hoh, who actually believes what he says, and says what he believes.

Matt Hoh is a disabled combat veteran who ably served his country, who is indeed still serving it to the best of his ability, with a mixture of candor and courage that has won me over and plenty of people in North Carolina and elsewhere. And we can't allow that! so sayeth establishment Democrats.

Blocking Matt Hoh from running is yet another clear sign of the death of democracy in America.

A short statement from Matt Hoh:

"We represent single-payer health care. We represent affordable housing. We represent living wages, action on the climate, etc, etc. And those things aren't represented by the [Cheri] Beasley campaign [the Democratic candidate for Senate] at all. They claim to be for working-class people, but you and I know, the Democratic Party, it's been decades since they've addressed the needs of working class people."

The Matthew Hoh Campaign is appealing the decision by the State Board of Elections, which voted 3-2 against, with all three Democrats voting against Hoh getting on the ballot.

There is a mid-August deadline for Matt Hoh's name getting on the ballot. It's a safe bet that establishment Democratic leaders in North Carolina will do everything in their power, legal or illegal, to block him. Why? Because Matt Hoh represents the people; the Democratic Party represents the owners and donors.

Godspeed, Matthew Hoh. Thank you for fighting for North Carolina and for America.