Green Party of Delaware: Christina School District should vote yes on measure to designate its schools as sanctuary schools for the children of refugees and undocumented immigrants 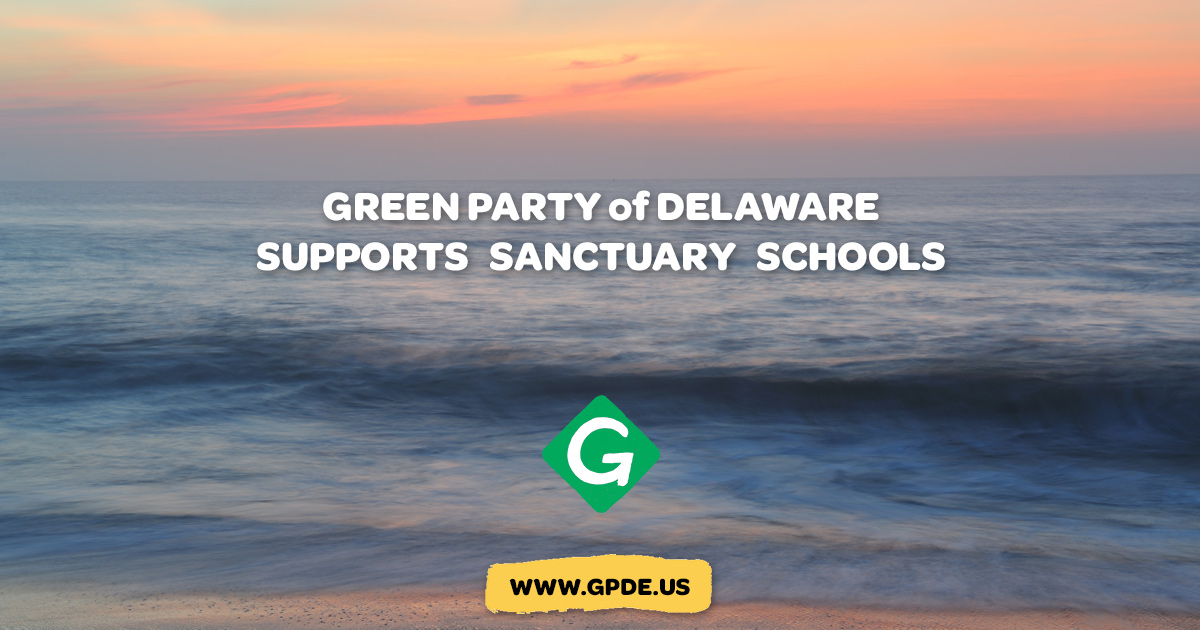 NEWARK, DELAWARE – The Green Party of Delaware published an open letter to the board members of the Christina School District urging them to reverse their February 14th decision to vote 'no' on a sanctuary measure that would have protected the children of undocumented immigrants and refugees.

The open letter referenced the dissents of Vice President George Evans and Fred Polanski to the sanctuary measure and stressed the Green Party of Delaware's view that schools should be a safe haven for all children to learn regardless of immigration or refugee status, and that no child should have to fear the threat of deportation, arrest or violence at the hands of ICE agents.

The text of the open letter is as follows:

The Green Party of Delaware supports school sanctuary for all Delaware students regardless of their or their family's immigration status, and condemns the striking down of the school sanctuary bill. On February 13, 2017, John M. Young introduced a safe school measure at the Christina School District Board Meeting, to make our schools a safe haven from ICE agents. The measure was a first in our state, and it was voted down by a narrow margin of 4-3 votes.

We commend John M. Young for introducing this measure and supporting it, and would also like to thank Board President Elizabeth Campbell-Paige and Shirley Sutton-Saffer for voting in favor. Voting to protect Delaware students from undue interference by law enforcement shows foresight and forbearance.

Frederick Polanski's dissent included concerns that the sanctuary bill would deny federal agents access to students. The Green Party of Delaware opposes our schools becoming an immigrant hunting ground used to detain, question, and arrest any Delaware student. The Green Party of Delaware and The Green Party of the United States stand firmly on the side of immigrants and Delaware's school children and their rights to live in our country peacefully. We believe that they have the right to seek quality education safely, free from fear of detention, arrest, and violence.

Creating an open environment for federal immigration law enforcement to operate in our schools makes all of Delaware's school children unsafe. We already see undocumented students and children of undocumented parents nationwide skipping school for fear of being questioned about their immigration status, which harms the whole school community. Handing over invading rights to ICE makes our schools places of politicized violence when they should should be safe havens for learning and growth of Delaware's children.

We urge the members of the Christina School Board to reconsider their position and cast their votes in favor of safe schools measures.

Signed,
The Green Party of Delaware

Christina votes no on 'sanctuary' for undocumented kids
By Jessica Bies, The News Journal, February 14, 2017