Green Party: Democrats abdicating their role as the "resistance" to Trump 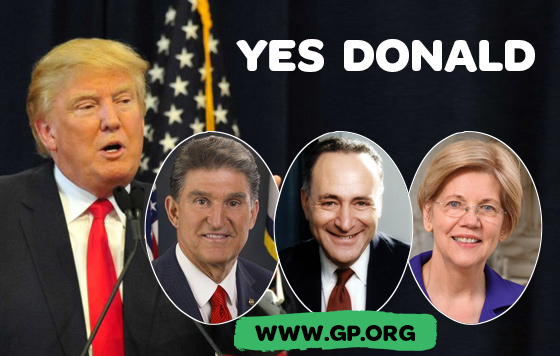 WASHINGTON, D.C. -- Green Party leaders said today that Democrats in Congress are retreating from their claim to be an opposition party during Donald Trump's presidency.

"We're seeing this over and over. Just enough Democrats are voting for Trump's appointees to enable their confirmation. In some cases, dangerous and unqualified appointees are getting confirmed with little or no Democratic objection. That's not what an opposition party does," said Laura Wells, 2010 Green Party candidate for Governor of California.

Greens are emerging as the real opposition party

"Democratic indulgence for Trump, more than anything else, proves that we desperately need more than two parties in Congress. The Green Party is emerging as the real resistance to Trump agenda in the sphere of electoral politics," said Ms. Wells.

Four Democrats voted to confirm Secretary of State Rex Tillerson, who intends to expand the extraction, burning, and consumption of more fossil fuels at least until 2040. No Republican voted against him. Mr. Tillerson is former CEO of ExxonMobil, which has a long history of attacks against the environment, the rights of workers and indigenous populations around the world, and climate scientists, including suppression of evidence from Exxon's own researchers who warned the company about global warming.

Among Democrats who voted to confirm Ben Carson, who has no qualifications to head the Dept. of Housing and Urban Development, is progressive leader Sen. Elizabeth Warren (Mass.).

Green Party leaders noted that many Democrats are likely to confirm Neil Gorsuch, Mr. Trump's nominee for the Supreme Court, despite Justice Gorsuch's record of favoritism towards corporate owners and management over workers and his hostility towards women's reproductive freedom and LGBTQiA+ rights. Sen. Joe Manchin (D-W.Va.) has called on Democrats to "give the man a chance".

Greens called on Democrats and Republicans in Congress to reject Scott Pruitt, President Trump's nominee to head the EPA, citing his dangerous skepticism regarding the growing climate crisis.

Mr. Trump has promised to withdraw the U.S. from the Paris accords and from efforts to keep the global temperature's average rise to well below 2C.

Greens warned that Mr. Pruitt's appointment and the Trump Administration's climate and energy policies would make the U.S. a global menace as the atmosphere continues to heat up. Greens said that Mr. Trump's denialism made him even more dangerous than the Obama Administration, which the Green Party had criticized for undermining international agreements on climate change.

"We're witnessing indications that many of Donald Trump's accomplishments as president will be the result of bipartisanship. By resisting compromise in pursuit of their agenda, Republicans have made themselves the political center of gravity. They'll continue to pull Democrats towards the right as long as the political field is effectively restricted to two parties," said Andrea Mérida-Cuéllar, co-chair of the Green Party of the United States and co-chair of the party's Latinx Caucus.