No, Alyssa Milano, Neither the Green Party nor Russians are to Blame for the Democrat’s Ineptitude 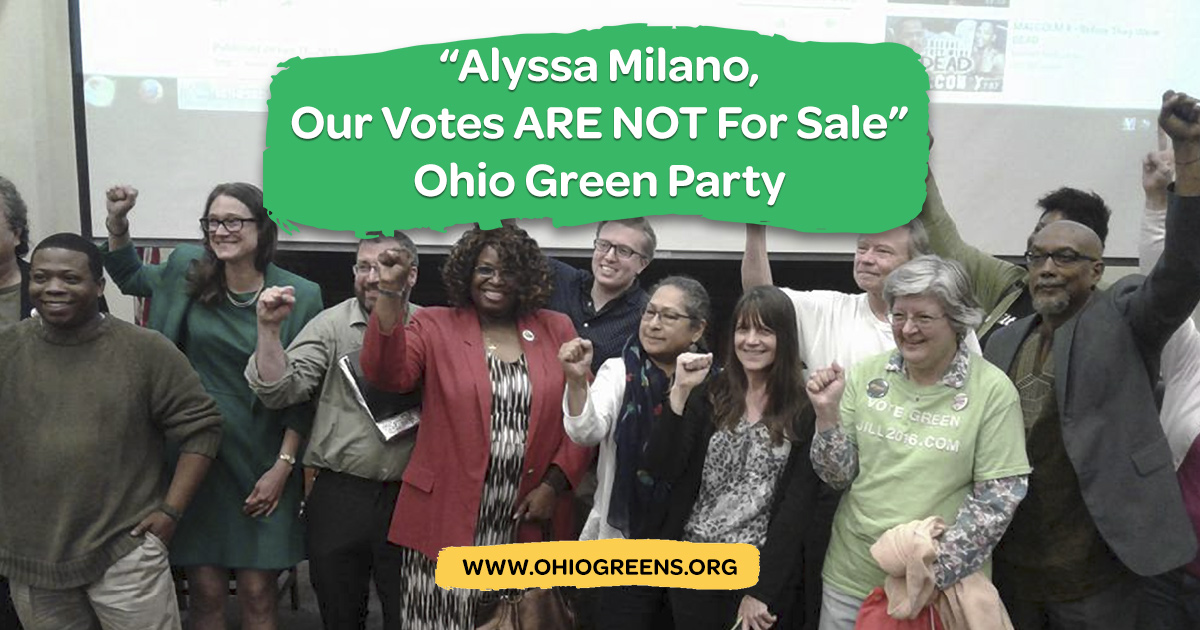 It has become as common as Donald Trump’s contemptuous tweets and Nancy Pelosi’s duplicitous smile. What I’m referring to is the maelstrom that erupts from the sheep who remain with her even though Hillary Clinton could care less about her hangers on. The minute some also-ran Democrat loses by a few thousand votes or a fraction of a percentage, the next day a gaggle of jackals take to social media to blame people who refuse to vote for the ever bankrupt Democrat part

This is precisely what took place yet again this morning as a slew of pundits and media personalities started throwing darts at people who voted for the Green Party in yesterday’s Ohio special election between Republican Troy Balderson and Democrat Danny O’Conner. Though the race has yet to be officially called, as of last count O’Conner is 1,754 votes behind, it didn’t stop the torrent of denial and finger pointing by partisan parrots on the left. The contest is most likely headed for a recount before an eventual winner is called, the prize for first place is gaining a seat in Congress for a couple of months before another election takes place in November.

The Green Party candidate, Joe Manchik, garnered 1,127 votes. This presented the perfect opportunity for Democrat shills to vent their spleen and in the process find yet another way to rationalize the fact that their favored candidate Clinton is not in the White House. There are many Tweets and Facebook posts I could point to in order to show this insidious attempt to malign people who refuse to be taken for suckers by the Democrat party anymore. Parenthetically, I call them the Democrat party because there is nothing democratic about a party that admitted in court that they are not bound by the will of the voters and rigged the 2016 primaries to the benefit of John McCain in pantsuits that paved the way for the orange imbecile in the White House.

There is one Tweet in particular that stood out though that has been grating me ever since I saw it this morning. Alyssa Milano conflated two narratives into one as she hinted that the Green Party vote tally was a result of Russian hacking. This is the go to playbook of Democrat sheepdogs and charlatans, if anyone dares to think for themselves or refuses to submit to the rank paternalism of the Democrat party, then they must either be Russian trolls or somehow under the influence of Vladimir Putin.

You know what sucks?

Because of our unwillingness to pass policy that protects our election integrity, I immediately think the Green Party votes tonight are Russian meddling.

Why else would anyone cast a protest vote in Ohio when there’s so much at stake?#OH12

There are two options to take once people encounter losses and setbacks. One option is to be honest and reflect to see how one can do better going forward in life. The other option is to lash out and blame everyone else and refuse to be do any type of self-assessment at all. Hillary Clinton chose the latter, she wrote a book blaming everyone and their mama except herself in her deluded attempt to justify America’s rejection of her cackling campaign.

All these pundits and politicians lining up to blame Donald Trump for the evils of the world after holding their tongues for eight years of Obama spreading the wealth around to the 1% and droning around the world can be discounted as frauds. This is not to diminish the malignant policies and personality of Trump, but to pretend like all Trump is the end all and be all of evil is either willful ignorance or willing hypocrisy. There are too many people on all sides who have taken up the sport of using human suffering to advance their political ideologies, situational morality is no way to stand for justice. Instead of addressing the sources of social inequalities that flow from both parties, partisans would rather take hammers to people who have had enough of the lies.

Try hard as they might to skirt accountability, the truth is that Democrats own Donald Trump. We would not have the petulant president in the White House if Obama and the Democrats did not spend eight years enriching the same criminals who bled our economy in 2008 while treating millions of Americans to foreclosures and symbolic acts. Democrats have perfected the art of acting concerned while kowtowing to their corporate masters, in reality both Democrats and Republicans are nothing more than flip sides of the same malicious coin. The race last night was not so much a competition of visions as it was a race of ambitions. Regardless of who wins between the Democrat or the Republicans, the American people will continue to be fed to the wolves on Wall Street in order to feed the greed of the neo-aristocracy.

I thus write this on behalf of anyone who voted for the Green Party yesterday in Ohio’s special election and for all who refuse to partake in the fraudulence of the Democrat or Republican parties. No Alyssa, the people who voted for someone other than the duopoly are not Russian hackers, they are Americans who have had enough of hacks like you and the corporate courtiers who keep being foisted upon us. Instead of bashing people who refuse to vote for team blue, how about you tell your Democrat friends to stop being the party of Wall Street, to stop voting for the Military-Financial complex and to stop taking their voters for chumps.