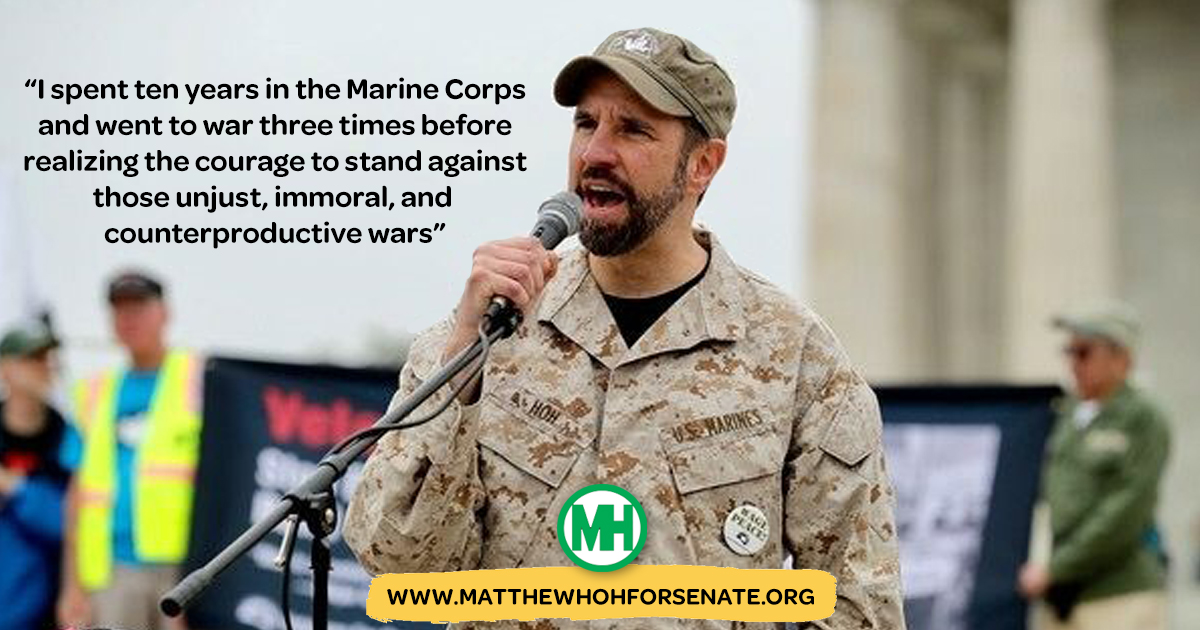 Last month, I announced my candidacy for the Green Party nomination for the US Senate in North Carolina. I am a disabled Marine Corps combat veteran of the Iraq war. In 2009, I resigned from my position with the State Department in Afghanistan in protest of the escalation of the war. Since 2010, I have been a Senior Fellow with the Center for International Policy. This is my first political campaign.

Campaign statement on why I am running:

I spent ten years in the Marine Corps and went to war three times before realizing the courage to stand against those unjust, immoral, and counterproductive wars. Since 2009, I have not only fought against the war machine but also against the systemic political and financial rot that underlies and connects our problems in North Carolina, the United States, and beyond. It's not just the overseas wars that have stolen futures from our country and others – it's also the wars against the working class, the continued racial injustices, the War on Drugs, the criminal for-profit healthcare system, our unsustainable housing crisis and so many other inequalities, injustices, and inequities that not only stifle individuals and families, but diminish and hold back entire neighborhoods, communities, municipalities, and our entire country.

I love my country, more to the point, I love the people of my country, and I see them suffering.62% of Americans want a third party in power because they know how much the current political and financial systems hold us back and how better we can be.

Please join me in this campaign to break our political system away from the corrupt two-party system beholden to the wealthy, the banks and the corporations. I would not be running if this were not necessary and if I did not think it possible to retake, reimagine and rebuild our political system.

My campaign focuses on working families and the planet, and represents the 62% of Americans who want a third party and the 85% who desire major electoral changes.

I am the only candidate running for the US Senate in North Carolina promising to enact Medicare for All, cancel student/medical debt, establish universal higher education, implement a no-compromise Green New Deal, and legislate transformational electoral and campaign finance reforms to include abolishing the electoral college, introducing ranked-choice voting and proportional representation, and publicly financing campaigns. Additionally, my platform is distinct from the Democrat and Republican platforms. My campaign calls for significant cuts to the Pentagon, an end to overseas wars, an end to the War on Drugs, including marijuana legalization, and prioritizes workers and their families over corporations and banks. These are all issues that have a majority or significant public support. You may find more information regarding my platform on the issues page of the campaign website.

I have been in North Carolina media multiple times, including most recently when I was interviewed by WCNC in Charlotte and by CBS-17 in Raleigh. I also had an op-ed published in the Charlotte Observer/Raleigh News & Observer/Durham Herald-Sun in response to the 20th anniversary of the 9/11 attacks. I have had a national media presence for over a decade now, and I have provided links below to recent appearances and writings.

You may find the internet and social media accounts for my campaign at these locations:

Since 2013 I have kept a personal blog. You may find prior media interviews and personal writings there, including details of my personal experience overcoming and living with the "invisible" wounds of war. The blog is at: https://matthewhoh.com.

As noted above, I am the only candidate running on a host of issues that have a majority or significant support among Americans. I welcome any interviews and opportunities to speak with you and your organization.

Below you will find further information about me and my campaign. Please let me know of any questions you may have or any additional information you may need. I can be reached at [email protected].

Thank you for your time and interest in my campaign.