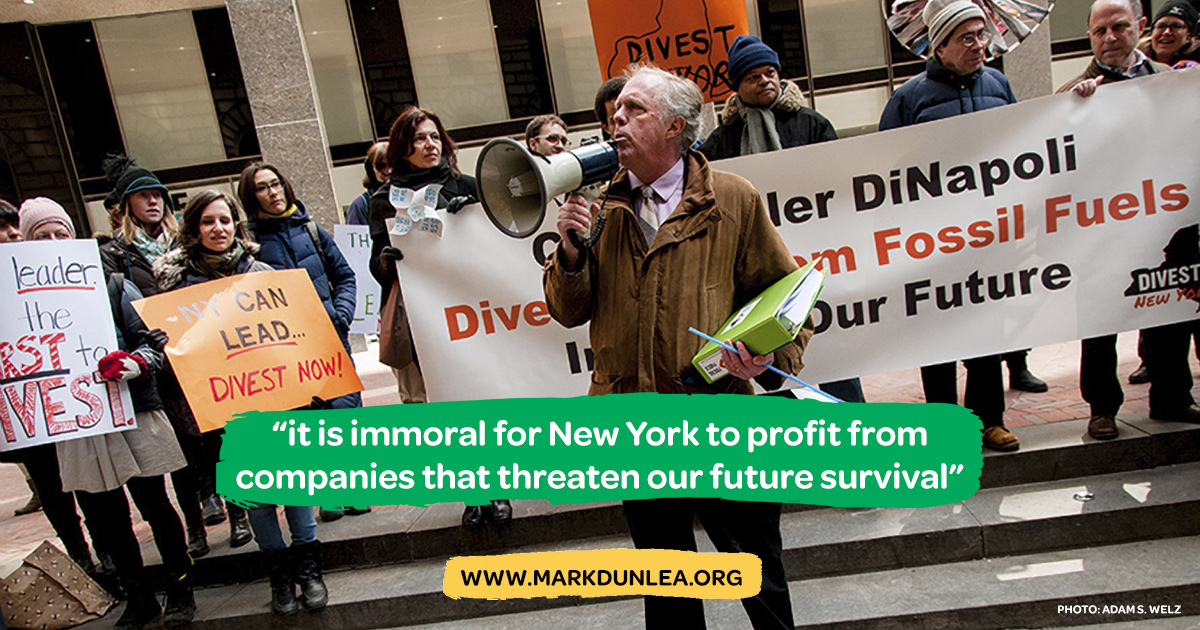 (NYC) Mark Dunlea, the Green Party candidate for State Comptroller, joined today in the Rise for Climate rally in NYC as part of the worldwide climate actions on September 8. Dunlea will speak about divestment at the September 8th event at the Governor’s mansion in Albany.

“Climate change poses a serious challenge to future life on this planet. We need an emergency mobilization now to immediately halt the further use of fossil fuels and to transition as quickly as possible to clean renewable energy like solar, wind and geothermal. This would create millions of jobs, improve our health and lower our electric bills. But our city and state elected officials have been applying band aids when major surgery is needed,” said Dunlea.

Dunlea, a longtime climate change activist, helped draft legislation at the state level for a state carbon tax as well as to move the state to 100% clean energy by 2030 and halt new fossil fuel infrastructure.

Dunlea, a member of the 350NYC steering committee, has helped coordinate the campaign at the city and state level to divest the state pension fund from fossil fuels. While NYC officials recently voted to begin the divestment process for the city’s two largest pension funds, the state legislature has failed to move a divestment bill that Dunlea helped draft despite having nearly 50 co-sponsors. The present state comptroller has opposed divestment, arguing instead for shareholder advocacy.

“It is immoral for the state to seek to profit from companies whose actions literally threaten our future survival. They are killing life on the planet. It is also a mistake to continue to invest billions in an industry which the world is seeking to end as soon as possible and which is already underperforming the rest of the stock market,” noted Dunlea.

Dunlea over the last 5 years has worked with 350.org and DivestNY to help coordinate efforts in New York to divest public pension funds from fossil fuels. The groups recently convinced NYC to divest its pension funds. Since the campaign was launched 5 years ago, more than 900 institutions worldwide with $6.2 trillion in assets have agreed to divest. Ireland recently became the first nation to divest. Ithaca, Cooperstown and Syracuse University are among NYS institutions that have agreed to divest. A study two years paid for by 350.org found that the failure to divest in 2013 when first asked had cost the pension fund $5 billion.

“We need a State Comptroller and other political leaders who will stand up to these polluters and bad corporate actors and make them do the right thing. They need to start cleaning up their messes before we lock them up,” said Dunlea

Dunlea has raised the concerns over the swinging door between the fossil fuel industry and the capitol. The chief investment officer for the State Comptroller, who helped lead the fight against divestment, was recently appointed to the Board of Directors of The Williams Company upon her retirement. Williams is a major gas pipeline builder (Williams and Constitution in NY) and has spent considerably to be a major lobbying force in Albany on fracking. Cuomo campaign manager was paid to lobby for Williams. Cuomo’s top assistance was convicted for corruption involving the CPV power plant in Orange County.