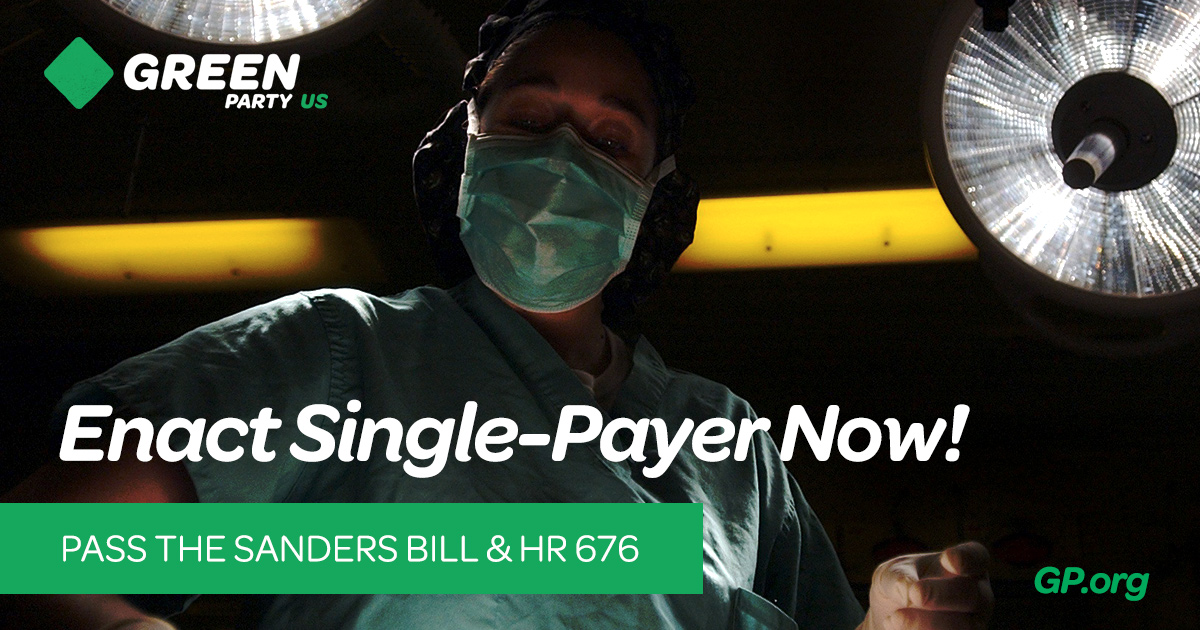 On preliminary analysis, the Sanders bill has strengths, such as strong protections for full reproductive services, but also has weaknesses that should be amended before a Senate vote: it excludes long term care and allows investor-owned health facilities to operate in the system.

"Establishment Democrats and Republicans measure the value of health care and other policies according to the Dow, GDP, and bottom lines of corporations -- especially those with powerful lobbies and generous campaign contributions. The Green Party judges policies and legislation according to how they benefit working people and the poor," said Jody Grage, Secretary of the Green Party of the United States and Green Party of Washington Chapter Coordinator.

Greens said that the greatest benefit of the Affordable Care Act (ACA) was expanding Medicaid to millions of Americans. At the same time, tens of millions of people in the U.S. have expensive but inadequate coverage or no coverage at all. The ACA has boosted the profits of health insurers, private hospitals, and pharmaceutical companies.

The Green Party recognizes that one hundred years of failed incremental reforms has left us with only one choice that is acceptable to the public, a Single-Payer system such as National Improved Medicare for All or a National Health Service.

"Every other developed country in the world guarantees its citizens health care. We don't have universal health care yet in the U.S. because too many Democrats and Republicans are either loyal to private insurance, pharmaceutical, and other medical industries or they buy into a fraudulent ideology that elevates the free market over human needs, or both," said Dr. Margaret Flowers, former Green candidate for the U.S. Senate in Maryland.

"Congress now has the chance to make health care a human right. The Green Party urges all people who believe in that right to continue to build the movement for Single-Payer and push members of Congress to support strong legislation that ends the commodification of health care. We will have to guard against efforts to weaken Medicare for All legislation," said Dr. Flowers.

Senate Debates Billions for Insurers while Public Demands Medicare for All
By Margaret Flowers and Kevin Zeese, Health Over Profit for Everyone, September 8, 2017