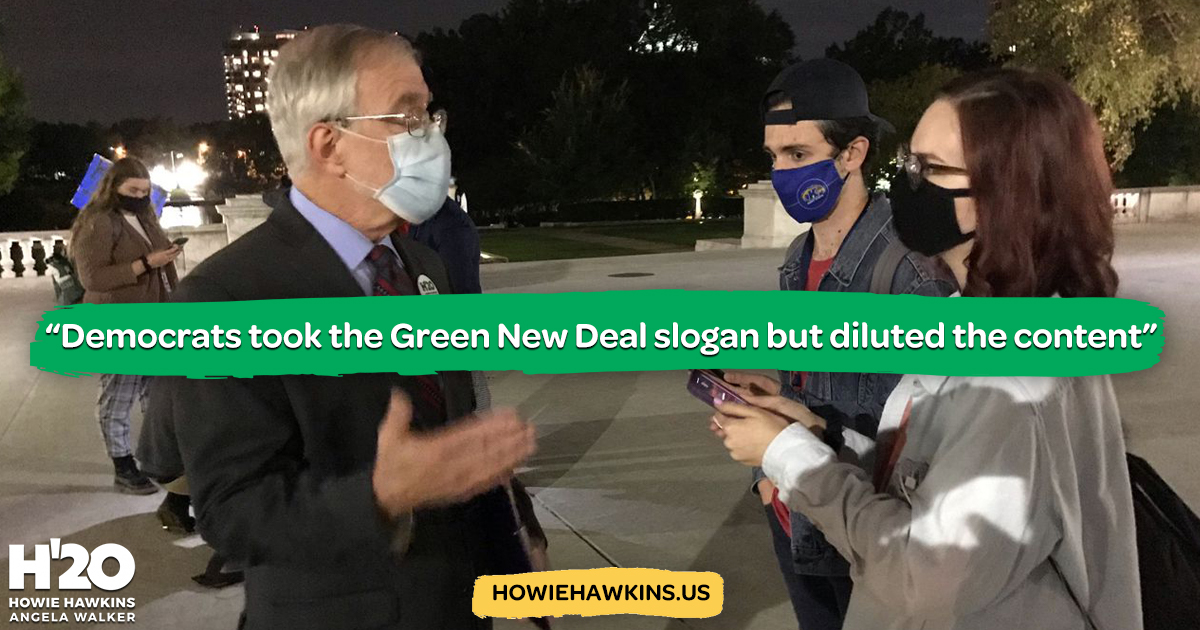 Because only the two main political parties—the Republicans and Democrats—have a real chance at winning most elections, Americans tend to forget about the third and fourth biggest parties, the Libertarian Party and the Green Party, respectively. This year, both these parties are fielding candidates for the nation's highest office.

The Observer was able to secure an interview with the Green Party presidential candidate, Howie Hawkins, who spoke at length about the environmental-economic nexus, the basis of his party's platform. Aside from environmental sustainability and economic viability, the other two primary components of the Green Party's platform are democracy and social justice. Hawkins is a long time environmental activist and trade unionist who has unsuccessfully ran for a variety of political offices in the past.

This election cycle has included unprecedented talk about environmental policy. Former Vice President Joe Biden released his own environmental plan, aptly named the Biden Plan, which drew heavily from the Green New Deal proposed last year by progressive Democrats Rep. Alexandria Ocasio-Cortez and Sen. Ed Markey. Hawkins has been championing the idea of a huge eco-socialist overhaul of economic policy—which he also calls the Green New Deal—for the last decade. For this reason, he was particularly critical of Biden's plan.

"Democrats took the slogan but diluted the content  ... It's too late [for their plan to be effective] given the crisis," Hawkins said. "We're the only party calling for a real Green New Deal."

Hawkins also had some criticism for President Donald Trump.

"To go around and tell people he's [Trump] bringing back manufacturing—he blew up the economy by blowing the COVID crisis. And it's shut down all the factories. And he calls it a miracle. No, it's a disaster," said Hawkins. "And Trump's policy to bring things back is to give tax cuts to the rich. It's called trickle down economics. They don't trickle down."

"So they [the Republican and Democratic elite] do financial speculation, stocks, bonds, commodities real estate, which doesn't create anything new. Nope, no new productive assets and jobs. Just rearranges who owns what we already got," Hawkins said.

According to Hawkins, his plan is better suited for improving the future economic outlook of the U.S.

"We can produce the technology and equipment and the products of a clean green economy. [One] hundred percent powered by clean energy, zero carbon emissions in our plan will get us there by 2030," said Hawkins.

These are topics that Hawkins had wanted to talk about at a presidential debate; however, he and the Libertarian Party candidate, Jo Jorgensen, were excluded from the debates. Hawkins was quite unhappy about that.