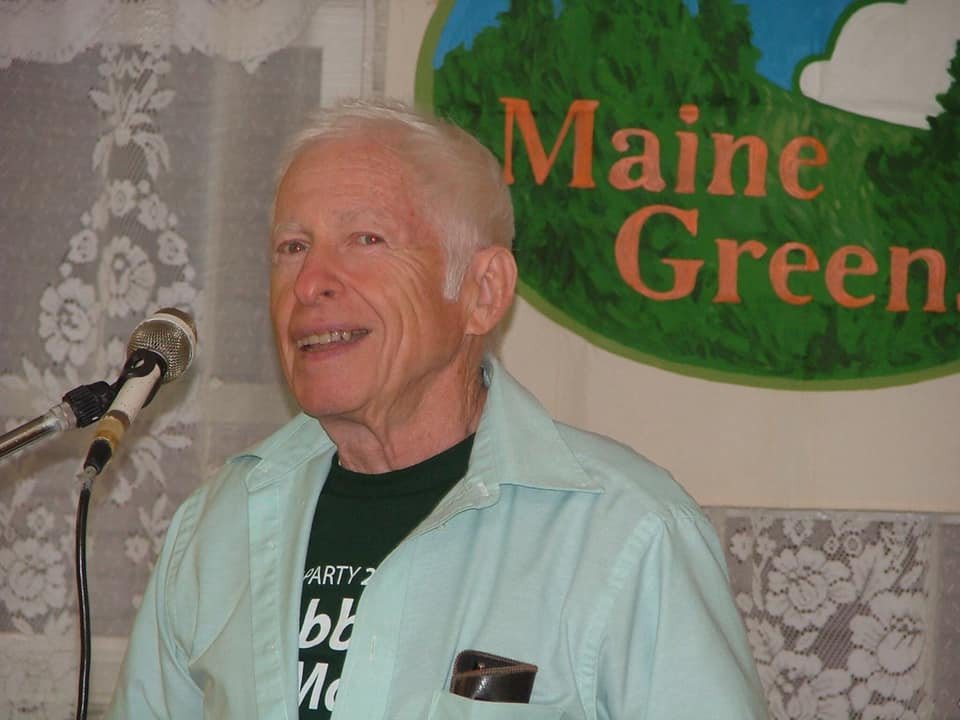 Fred Dolgon, a passionate supporter of Maine's Green Independent Party, who fought tirelessly for workers' rights and environment issues, died Sunday, January 24, 2021, after a period of declining health. He was 91.

Mr. Dolgon, a peace activist who was beloved in the Old Orchard Beach area, ran unsuccessfully for a seat in the Maine Legislature representing District 31 in 2002.

Jacqui Deveneau, a leader in the Green party, said Tuesday that Dolgon was a peace activist and strong supporter of the party.

"Freddie was a force," Deveneau said. "He was a little old man with white hair who loved to argue, but he was the sweetest person in the world. He just really cared a lot about everything. Freddie was always the person who kept us in humor. He had this amazing wit about him. He came to one of our meetings and brought this suitcase full of hats. He put on a hat and did a character. He put on another had and did a character. Everyone just loved him."

Lyn Maravell, a co-chair of the Green party, remembered the day she met Dolgon.

"Back in the 90s, Fred was the first Green to ever knock on my door looking for a signature or a donation," Maravell said. "He was a very active member for many years, who encouraged and helped local candidates. He was fun and funny and smiley. He was just an all-around great person to work with."

In 2002, Mr. Dolgon ran unsuccessfully for a seat in the Legislature representing District 31, which encompasses Old Orchard Beach and Saco.

Dolgon said in a Portland Press Herald news story that he was running for office because he was "tired of yelling at politicians and corporative executives on his TV at home," and "hoped to find an audience in Augusta and the ability to sponsor and vote on specific legislation."

"Even though I have no desire to be a power monger, sooner or later, in order for me to make a dent, you have to be in a place where your vote counts and your speeches matter," Dolgon said.

"My dad would talk to anybody. Even if they would disagree vehemently, they would leave as friends," his son said. "It wasn't about liberal politics. It was about how you treat people. My dad could meet with the most conservative person and they might not agree, but my dad would work to find what they could agree on. He felt it was more important to find out who people were and to talk to them about what they need – than it was to make a political point. He wasn't looking to make political points. He was looking to build people up."

In 2004, Mr. Dolgon was one of four Green party members who faced a variety of criminal campaign fraud charges relating to the campaign of a Biddeford candidate running for state representative. According to a 2004 story in the Press Herald, the indictments alleged the campaign staffers delivered absentee ballots to numerous elderly voters and then either urged them to vote for the candidate or marked the ballots themselves.

"It was so anathema to who my father was," his son said. "This idea that he would steal votes. … His whole thing was going around, trying to enable people who couldn't get to the polls to vote. He would never tell people who to vote for. It was sad, ironic and absurd. He was sentenced to 30 hours of community service. I thought how ironic … the guy, whose whole life was about community service, has just been convicted and his punishment was community service."

Mr. Dolgon remained active in the Green party until recently.

He was a loving husband to the late Arlene Dolgon, his wife for 60 years. The couple raised two children, Corey Dolgon and Melissa Robinson. He also leaves a son from his first marriage, Marty Krutolow.

In his early years, Mr. Dolgon lived in Brooklyn, New York. He held several jobs including working for the New York State Thruway and Penn Central Transportation Company. He also was a technical writer.

His son reflected on their early years Tuesday saying his parents were loving, supportive and active in their lives. "We were the house where all the kids from the neighborhood who had trouble at home would come to," said his son. "My mom fed them. My dad drove them wherever they needed to go. … They built a home for the neighborhood. Growing up, we had one of those classic middle-class suburban neighborhoods. In many ways, it was idyllic. I think they did such a good job role modeling good people for us."

Mr. Dolgon took care of his wife for five years until her passing last February. He lived at the Inn at Atlantic Heights in Saco for four months. He had dementia and his health declined. In June, he went to live with his son.

"For the longest time, he was my biggest fan, but also my roughest critic," his son said. "For years, I would give him things I was writing. No matter how successful I might become, his read of my drafts was the most uplifting, or the most damaging. His voice is part of my voice. When I'm writing, there are times I can tell … he wrote this. It's his cadence. Especially, the more I go through his papers and read them. I'll say, yeah, that's where I got that from."