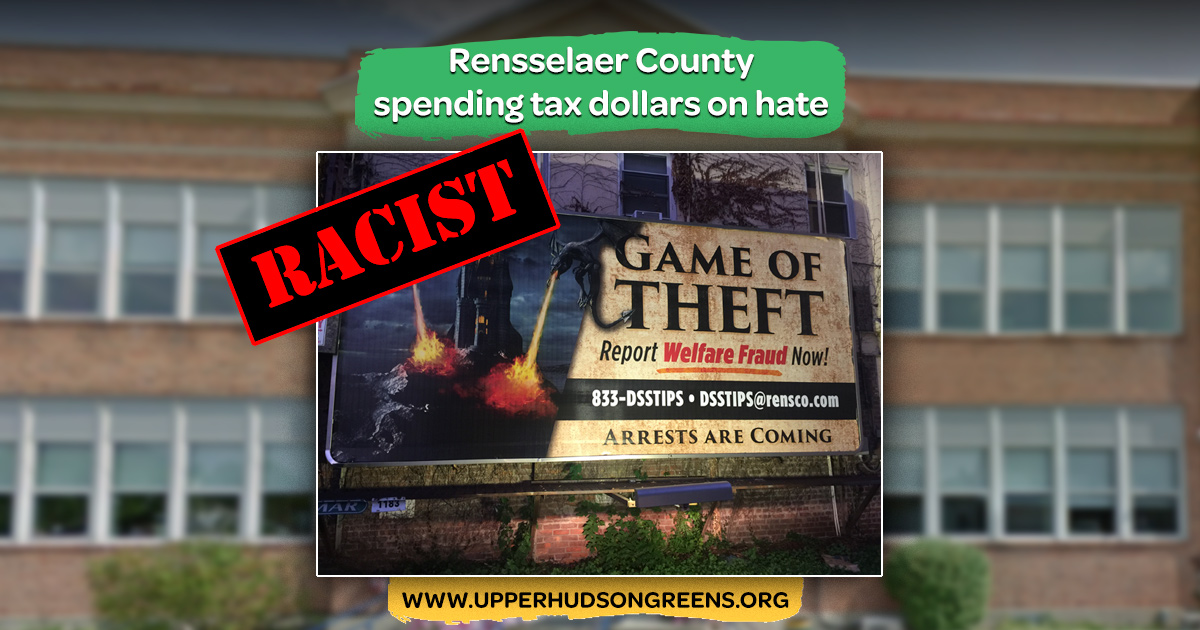 TROY, Ny – In late July Rensselaer County put up billboards in Troy neighborhoods with a significant black population. The billboards state, "GAME OF THEFT - Report Welfare Fraud Now! - 833-DSSTIPS - [email protected] - ARRESTS ARE COMING" with imagery from Game of Thrones, the popular television series. This comes after a long and costly investigation by the county which culminated with the arrest of 19 people in May who were accused of improperly collecting $56,000 in welfare benefits which makes up a very small percentage of total benefit spending by the county.

"How much taxpayer money is Rensselaer County wasting on these billboards and on their witch hunts for supposed violators? This is a racist county executive and sheriff trying to shame people living on the margins of society and trying to make this issue seem like a major problem when it's not. In 2016, 99% of the benefit dollars in the US were in no way associated with fraud," said Upper Hudson Green Party Chair Kaleb Winters.

Just last week the County Sherriff's office and eight other agencies totaling 40 officers raided 9 convenience stores accusing them of SNAP fraud or code violations after another long and costly investigation. The county is still not saying what stores were charged with what crimes and more than half of the stores were back open the next day.

"Rather than focusing limited resources on a nonissue, the Green Party calls upon Rensselaer County to instead investigate wage theft or provide welfare recipients with adequate basic employment support, such as child care, education, transportation, and job training. The county should also stop requiring welfare recipients to accept jobs that pay wages below a living wage, which only drives down wages and exploits workers for private profit at public expense," concluded Winters.